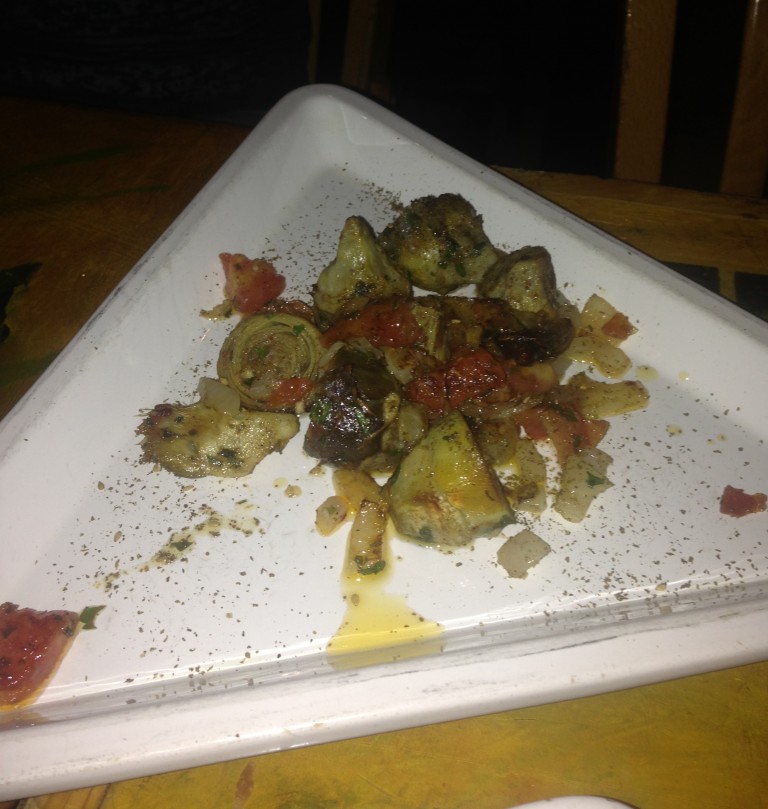 In the nearly 45 minutes it took us to find parking near Steinway Street in Astoria, I wondered what I could possibly eat that would be worth driving around like this. My gut reaction was NOTHING. Block after infuriating block, I cursed the cars that just beat me out for the spot I thought was going to be mine. I NEVER saw a street with more fire hydrants and driveways. 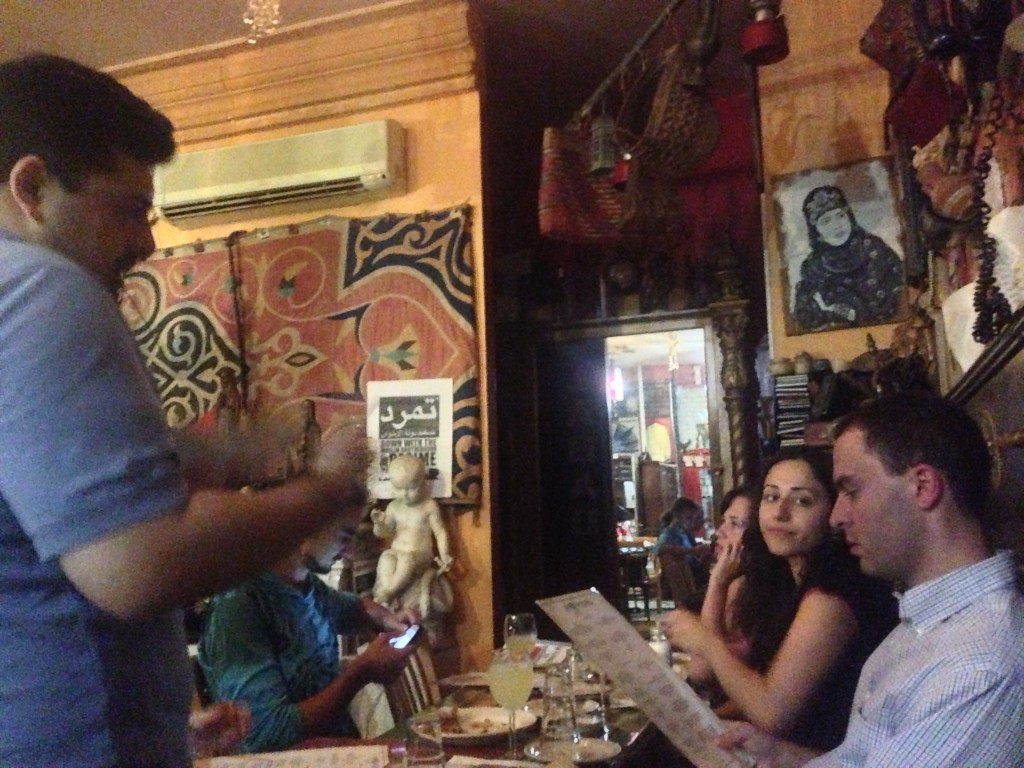 Esam “performs” the menu for a group of perplexed diners—making choices at Mombar can be difficult. It’s probably best to go in a larger group and get a good mix of the menu.

But alas, there it was – four blocks away, barely big enough to accommodate the car – a spot. As we walked to Mombar, I wondered again: What could be worth that experience? I was soon to find out.

Esam was the first person we encountered at the small, dimly lit space in the middle of bustling Astoria. “Good evening,” he said with a warm and welcoming, yet mischievous tone. We were escorted to a table along the wall and not sure upon entering if this were a restaurant or an art gallery.

Stepping through the door was like stepping out of time and into a different world. A banquet up against the back wall played host to a bench of embroidered pillows atop a fabric seat. On the walls hung artifacts from Middle Eastern/Egyptian culture along with an eclectic mix of oddly ‘American’ items: a Coca-Cola bottle and old signs advertising products. On the outside wall hangs the letters to spell out the restaurant’s name and big eyes. I wondered if the eyes had blinked every time they watched our vehicle drive by in search of the elusive parking spot.

On the floor an array of mosaic tiles held your attention until your eyes could wander up to the stained glass windows. We later learned that all of the artistic creations were those of Moustafa El Sayed – the resident artist who also serves as the chef and owner of Mombar.

Grilled artichoke salad was served warmed and blended exquisitely with grilled tomatoes and onions in Egyptian spice and delicate oil.

There’s a menu, but it’s basically not necessary – part of the Mombar mystique is the reciting of the menu by Esam. It’s like a performance really. His descriptions, infused with colorful narrative, are laced with Egyptian culture, lore and food traditions. He listens carefully to questions and makes your dinner choices accordingly.

On the list is an assortment of organ food – brains, liver, kidney, tripe. For the faint at heart (bad pun here), there are some more recognizable dishes that will tantalize and thrill the most discerning of palates or the foodie novice. If you like flavor, Mombar is your spot.

Settling on choices can be difficult so be prepared not to know which of the specials to choose. There is lamb, chicken, sausage and fish and of course, vegetarian dishes. We started out with a plate of warmed phyllo accompanied by a sesame seed dipping oil. For appetizers we chose a warm, fire roasted beet salad with apples and sweet onion and also a grilled artichoke salad roasted with onion and spices.

Stepping out in the realm of slightly daring, we also chose the lamb cheek, which was a plate of seasoned and ground lamb meat stirred together with a raw egg just before it was finished cooking. The dish arrives piping hot with a Naan-like bread served to the side. In a small dish that tags along,a green sauce is placed on the table with words of caution from Esam, “some people find it hot.” In actuality, for lovers of lamb, this dish is an absolute must and for those who avoid lamb, it too is a must. The texture and flavors packed into this treat are not to be missed. 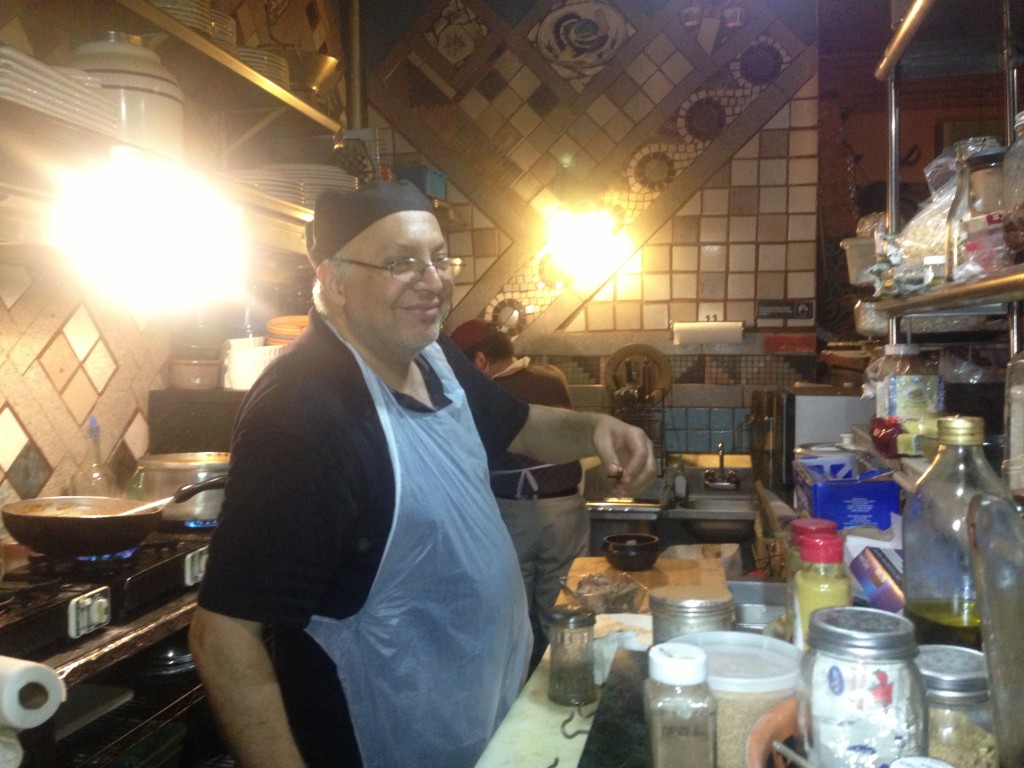 Chef Moustafa can smile about the wonderful food as well as artistic talent he brings to the restaurant. Most guests agree they could be convinced they were eating at his home.

For the entrée part of our dinner we ordered the salmon special – a base of phyllo crust on top of which sits a salmon filet surrounded by fresh peppers, onions, tomatoes, capers and other vegetables. Then, another layer of phyllo is placed over the fish and baked until golden. The result is a deliciously seasoned, perfectly baked fish and tender vegetables that release their juices into the crust.

The second entrée we chose was fish tagine, an incredible blend of tilapia filet smothered in vegetables including eggplant, tomatoes and olives, that shows off the restaurant’s signature centerpiece – Egyptian clay-pot cooking. The dish is served with a pyramid of perfumed couscous and can be prepared with chicken or lamb as well.

To round out our trio of dinners we ordered the rabbit and rice – not for everyone – but something that arrived perfectly prepared without a hint of gaminess in the taste.

After placing the order, it was suggested by Esam that some spirits were in order to compliment our selection. Wine we were told could be purchased at the liquor store down the street – I had forgotten it was BYOBand so I was chosen to make the trek for a bottle of cabernet.

The chef’s surprise dessert was a masterful creation balancing sugar, spice, fruit and cream to perfection.

Defining the dessert at Mombar is a short and sweet task. It is GOOD. You can choose from a variety of baklava type confections or you can decide to go with the chef’s surprise of the day. We had Egyptian bread pudding which was a delightful blend of creamy egg custard filling the spaces between honey soaked bread cubes topped with cream and nuts – need we say more? Of course, with an increasing admiration growing for chef Moustafa’s creations, we had to have the chef’s surprise. The only thing that wasn’t a surprise was how good it was. A whole sweet pear, wrapped in phyllo dough and then cracked open and filled with honey soaked bananas and blueberries shrouded in a soured cream. And by the way, don’t forget to have the mint tea.

There is only one bad thing about Mombar and it has nothing to do with the food. It is what seems to be an impossible parking situation. We have no advice as to how to avoid it but public transportation almost seems appealing. You can secure parking a few blocks away and that is what we advise so that you don’t waste your time circling endlessly. And the best part about it is that your walk back to the car is filled with the streets that seem to have rolled out while you were eating and are now packed with a colorful Egyptian community, smoking hookah on every inch of the street while nibbling on the delicacies of their homeland.

Mombar serves the culinary concoctions of an artist as well as offering one of the most unique dining experiences you will find. To go there is to be well fed and charmed by both the chef and a small staff that makes everyone feel like their meal is the most important thing on earth. Well maybe not on earth. Really, the best way to define Mombar is to say it’s something out of this world.