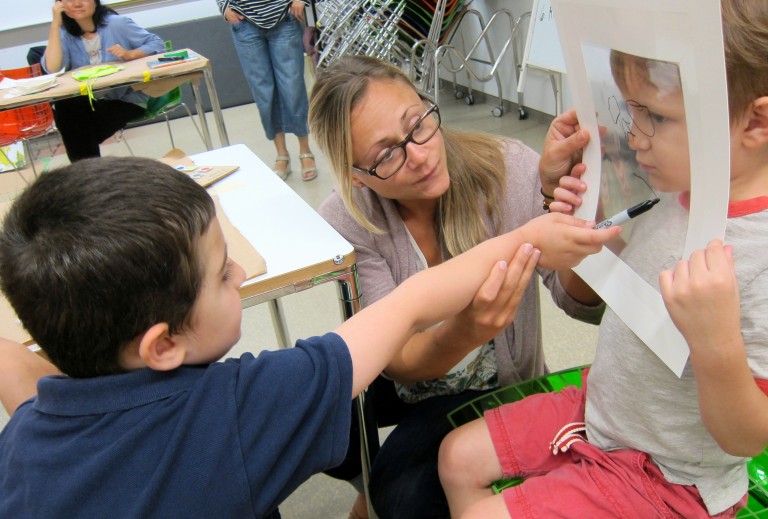 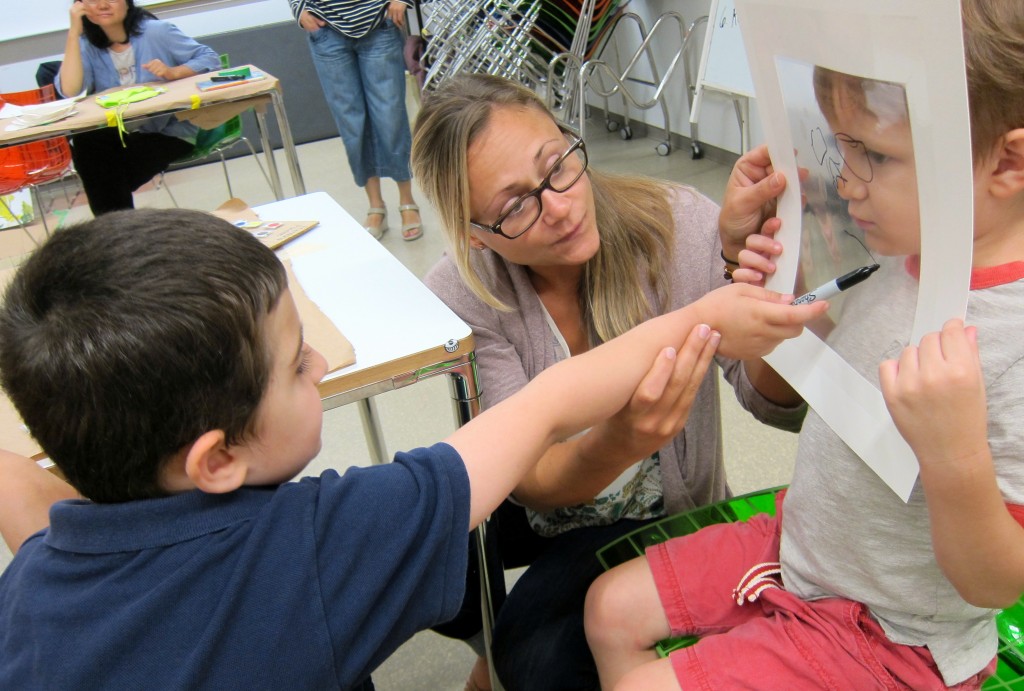 Jennifer Candiano, the associate coordinator of ArtAccess Autism Programs at the Queens Museum of Art, assists two little boys during a class at the Queens Central Library in Jamaica with a face tracing activity she said helps to encourage socialization and eye contact. The museum
also offers classes for children with autism at the Howard Beach library. Hannah Sheehan/The Forum Newsgroup

Despite being closed for renovations this summer, the Queens Museum of Art is continuing its work with families affected by autism through a series of weekly art classes in libraries around the borough. Funded by VSA, the Kennedy Center’s International Organization on Arts and Disability, the Friendship Workshop is one of several autism initiatives created and delivered by the museum’s ArtAccess program in recent years. The workshop, which has been held in such libraries as the sites in Howard Beach and Jamaica, uses art as a means of developing social skills in children with autism in a community setting, without the pressure of verbal communication.

“I find it to be a nice, easy way for two people to communicate, especially peers,” said Jennifer Candiano, the Art Access Autism Programs associate coordinator leading the classes at the Queens Central Library in Jamaica. “That’s a huge part of our groups. Two kids, actually conversing and using the art as the object they can look at together.

ArtAccess coordinator Mitra Dejkameh, who helps teach the classes, said that the workshop also affords an essential opportunity for parents to directly observe their child’s potential in a friendly, welcoming environment where they don’t have to be overly concerned with monitoring behavior.

“It’s great that the parents can see what their child can actually do in a group and give them more chances,” she said.

According to Candiano, that isn’t always the case for families of children with autism.

Dejkameh said she’s noticed marked improvement in her students with each passing week.

Julia, a South Ozone Park mother of twin four year old girls with autism who did not want to use her last name, said she decided to try out the Friendship Workshop after finding success with similar classes at the Children’s Museum of the Arts in Manhattan.

Enrollment in the Friendship Workshop is currently full, but ArtAccess is pursuing funding for more programs like it in the future. Their other popular autism initiatives, including photography and DJ classes for teens, open studio time for adults, and a museum explorer’s club for families will return after the museum reopens in October.