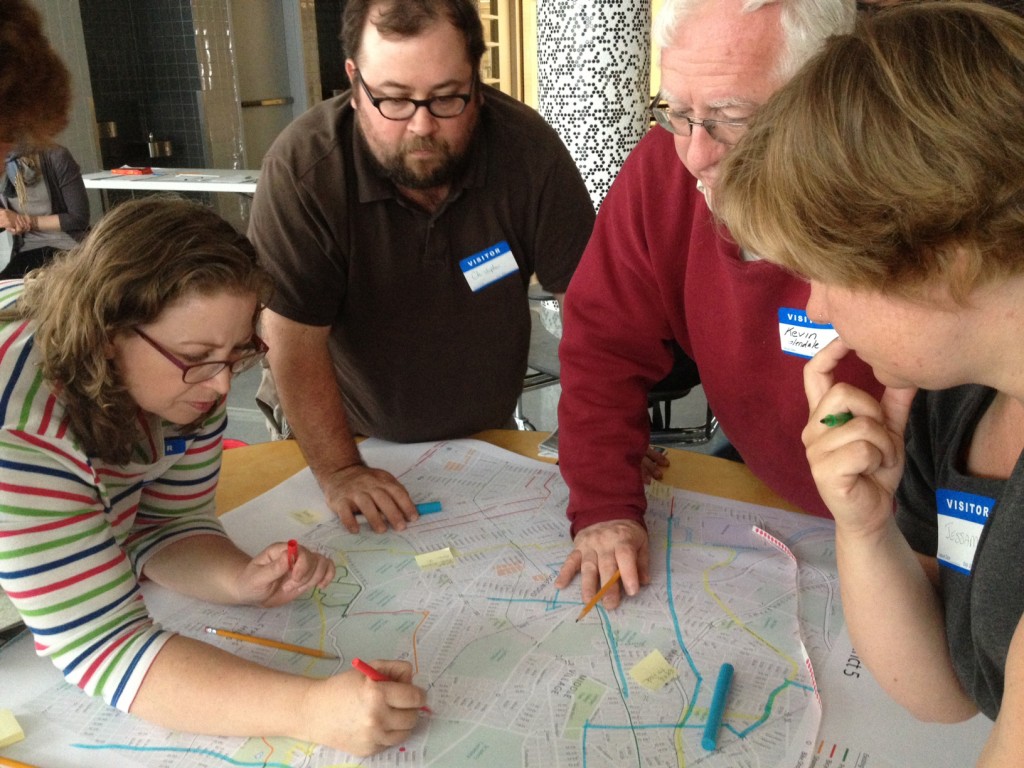 CB 5 members and other area residents gathered at Maspeth High School in May to discuss where they would like to see bike lanes implemented. Officials are expected to soon inform the board how feasible the residents’ suggestions are following a study by the Department of City Planning. File Photo

Community Board 5 is making moves towards implementing bike infrastructure, such as bike routes and bike racks, in Central Queens, namely Maspeth, Middle Village, Glendale, and Ridgewood, a noticeable dead zone when looking at a city map in regards to bike infrastructure.

Right now the New York Department of City Planning is in the process of measuring the routes that were suggested by citizen at the bike forum that was held last spring.

Some of the suggested routes that are currently being researched include Onderdonk Avenue and Woodward Avenue in Ridgewood, said Gary Giordano, District Manager of CB 5.

“I think they have a better chance because they are one way streets,” Giordano said. He mentioned another suggestion that would run up 69th Street from Metropolitan Avenue.

The district manager also said that there was no real opposition for the bike lanes during the forum, mostly just suggestions from citizens about where the bike routes could be implemented. He did say that the turnout was lighter than expected.

John Maier, a CB 5 member who sits on the group’s transportation committee, said that a presentation of fact finding and recommendation of treatment from the Department of City Planning will hopefully come in the next month or month and a half.

He stressed that the infrastructure may not be actual bike lanes but sharrows, which means shared lane markings for easier accessibility for bicyclist, bike routes and bike racks. Giordano iterated the same notion, saying “I doubt any of them will have a fully segregated bike lane.” They are looking for options that will suit the roads and neighborhoods in the community board’s area.

Peter Beadle, a member of Community Board 6 and a volunteer for Transportation Alternatives, bikes to his work in Midtown at least weekly. He said, “I bike through Community Board 5 and it takes about four miles before I reach my first bike lane in Sunnyside.” He hopes that progress will be made in the region and then he can implement similar changes in his board’s area, which includes Forest Hills and Rego Park.

Similarly, Maier said that hopefully other community boards will follow suit so there can be a unified system throughout Queens. Although neighborhoods like Maspeth, Middle Village, Ridgewood and Glendale are lacking the infrastructure now, he said they are not behind other parts of the city.

Maier noted that CB 2 – which covers such neighborhoods as Long Island City, Woodside and Maspeth – and CB 5 are actually early adapters when it comes to bike infrastructure and other planning implementation.

Miller Nuttle, manager of campaigns and organizing at the nonprofit Transportation Alternatives said that with political will from local politicians and resources from the Department of Transportation, traffic safety in Queens can be achieved.