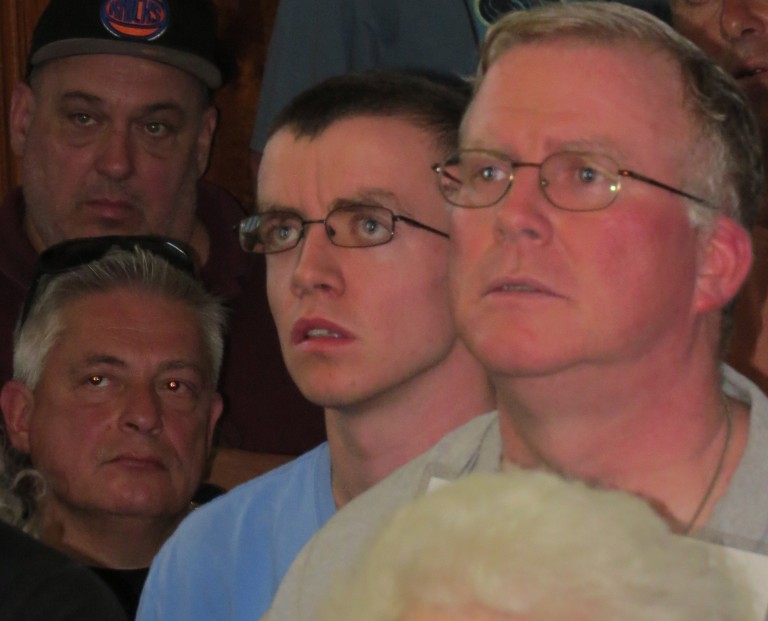 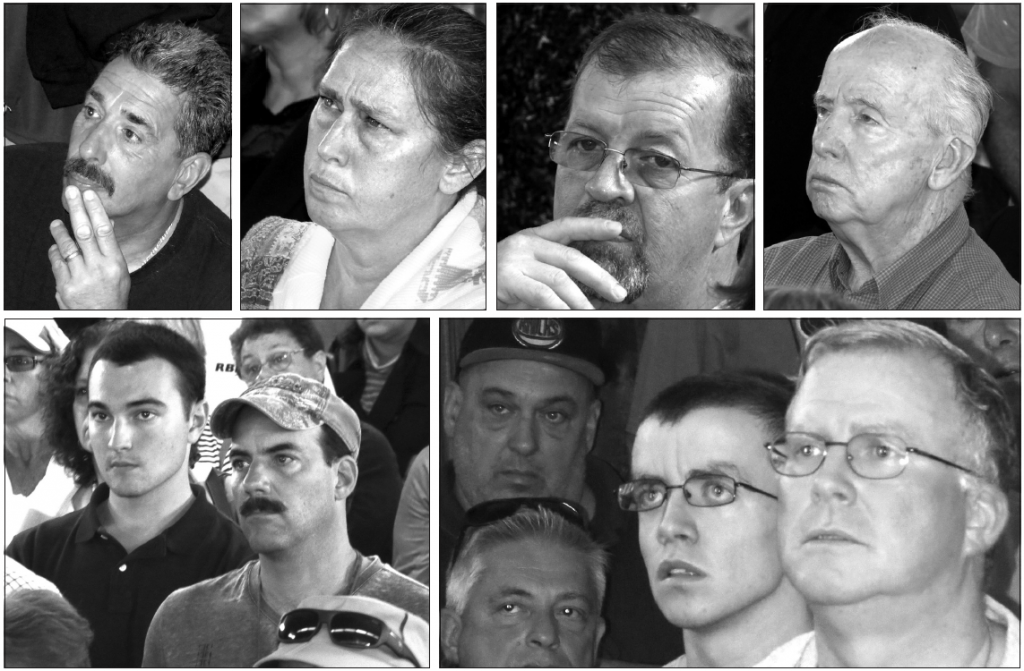 Somber faces among the crowd at Saturday’s rally to protest the Biggert Waters Act were indicative of the range of emotion and concern felt by residents facing hikes in flood insurance premiums that could drive them from their homes and wipe out many coastal communities. Patricia Adams/The Forum Newsgroup

Nearly 1,000 people from Howard Beach, Broad Channel and the Rockaways have converged at the American Legion Hall in Broad Channel last Saturday afternoon. They joined tens of thousands of others who gathered across the nation in more than 15 states at the same time, for the same reason–to try and stop the Federal Emergency Management Agency (FEMA) from enacting the Biggert-Waters legislation that is postured to destroy their families, their homes and their communities.

The act was signed into law in 2012 and essentially presents itself as the mechanism to abolish the flood insurance subsidy program that homeowners in coastal communities have always depended on to provide affordable protection for their homes.

Dan Mundy, President of the Broad Channel Civic Association who was at the forefront of the organized efforts in Broad Channel, led the charge against the legislation in his community and the surrounding ones. “We were brought together today,” Mundy told a cheering crowd, “because of outrageous legislation and perhaps the most inept agency I’ve ever seen: FEMA.”

Mundy explained that his own research led him to many discoveries, including the fact that the National Oceanic and Atmospheric Administration (NOAA) conducted a study which defined Sandy as a 700 year storm, and the category of event which was not likely to hit again, according to the same experts, for a similar period of time.

“Nature took its best shot at us but we’re still here,” Mundy said. Urging residents to take immediate action by calling government officials and demand the repeal of Biggert Waters, Mundy praised the determination and the resilience of everyone who struggled over the last year to rebound. “You deserve a tremendous round of applause,” he said. “And this is what you did. You pumped out your basements and you pumped them out again when they filled up. You pumped out your crawl spaces when they filled up with fuel oil. You dealt with no electricity, no gas and absolutely no information. You ripped out the sheetrock, the floors, the ceilings and the walls.  You threw out everything you owned. You shoveled the sand out of your homes, and then dealt with an absolutely ridiculous snow storm in October. You helped out your neighbors, your friends and every stranger in need you encountered. We certainly saw the best of the best rise in this situation. That is what you did. And you can’t stop now.”

Speaker after speaker from different communities took the mic to reiterate that which Mundy spoke about. Howard Beach architect, John Calcagnile, who has worked on hosting the rally with Mundy, reminded the crowd about the government’s lack of response to help its own people. Calcagnile spoke over thunderous applause. “If our government can send billions and billions of dollars overseas to our friends and our foes who use our own money against us, “ he said, “then why can’t they give money to the coastal communities that need it? Keep our money at home.” Calcagnile pointed out that since 1968, it’s been government policy to offer a subsidized flood insurance program in order to encourage development along the coastline.

Now an overwhelming threat has been posed by legislation which, as of hours before the rallies were scheduled to start, was branded by its own author, Maxine Waters, as a mistake. “I am outraged by the increased costs of flood insurance premiums that have resulted from the Biggert-Waters Act,” Waters said. “I certainly did not intend for these types of outrageous premiums to occur for any homeowner.” Waters went on to explain the goal of the legislation as a means to create a bipartisan solution to the national flood insurance program. She pledged to work with Congress and FEMA to fix the problem and the “unintended consequences.”

But now the unintended consequences are faced by many people who will not be able to cover the exorbitant costs of the newly proposed insurance rates. “These people are not millionaires,” Dan Mundy reminded the crowd. The people who live in these neighborhoods are the ones that teach our kids, pick up our garbage, keep us safe from the bad guys and run into burning buildings. That’s who we have in these neighborhoods.”

Provisions of Biggert-Waters were scheduled to begin taking effect on October 1st. Among the points that are considered to be among the worst features of the legislation is that anyone who purchases a home in the flood zones will be subjected to an immediate escalation to top level premiums. “First, they want to make it impossible for us to stay in our homes,” said Rockaway resident Viola Holmes, “now they also want to make it impossible for us to sell them. The United States of America has lost its identity.”

The Forum urges you to do everything that you can to help repeal the Biggert-Waters Act. For a list of numbers and suggestions, please see page 27 for details on how you can help.