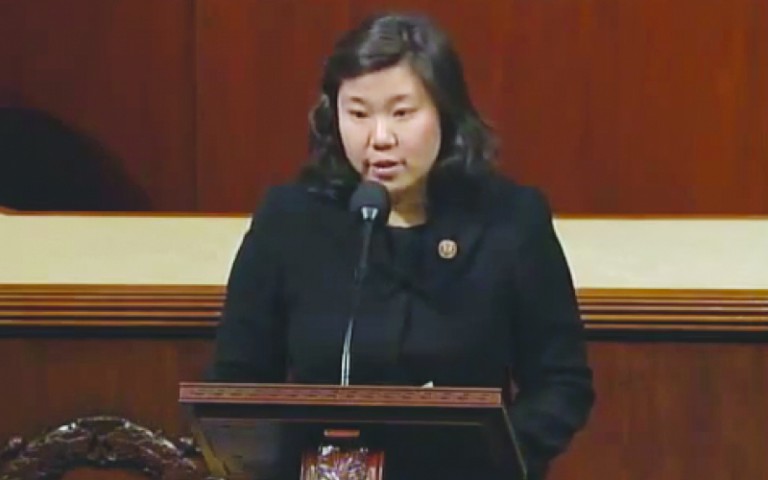 If U.S. Rep. Grace Meng’s (D-Queens) performance in a parody musical performed at Queens College over the weekend is any indication, she is definitely on the mend after being attacked and robbed in Washington D.C. last week.

Just days before Meng sang in the “Legislative Acts” performance – including the spoof song, “There’s No Business Like Small Business” – she had been struck in the back of the head. As she fell to the ground during the attack that happened as she was walking towards her Washington apartment after having dinner at a D.C. restaurant on the evening of Nov. 19, the perpetrator stole her handbag and then fled on foot.

“While this was a frightening ordeal, I fortunately was not seriously injured,” Meng said. “Obviously things could have been much worse. I think the U.S. Capitol Police and the District of Columbia Police for responding quickly and professionally.”

Meng, a freshman lawmaker who used to represent Flushing in the City Council, suffered a bruise on her chin and underwent a CAT scan at George Washington University Hospital.

While the congresswoman has said she is not sure that the incident was part of what is being called “knockout” crimes, during which perpetrators, often teens, will attempt to render a person unconscious with a single blow, Meng does consider it a possibility.

“It’s something that’s going on around the country, and we need to send a strong message that this type of behavior is not funny, is not acceptable, and is criminal,” Meng said in a television interview.

“I encourage [the perpetrators] to view the people they are knocking down,” she continued. “It’s not funny at all. These are human beings; these are your fellow Americans. These victims could easily be your family or friends.”

While reports of the “knockout” crime have surfaced in cities across the country, including New York, police and other security experts are cautioning people to not grow hysterical over the trend, saying it is likely too early to tell whether this is real or an urban myth. While the attacks, of course, are very real, it has been argued that it may just be crime, and not teenagers or other individuals attempting to knock someone out as part of a violent game.