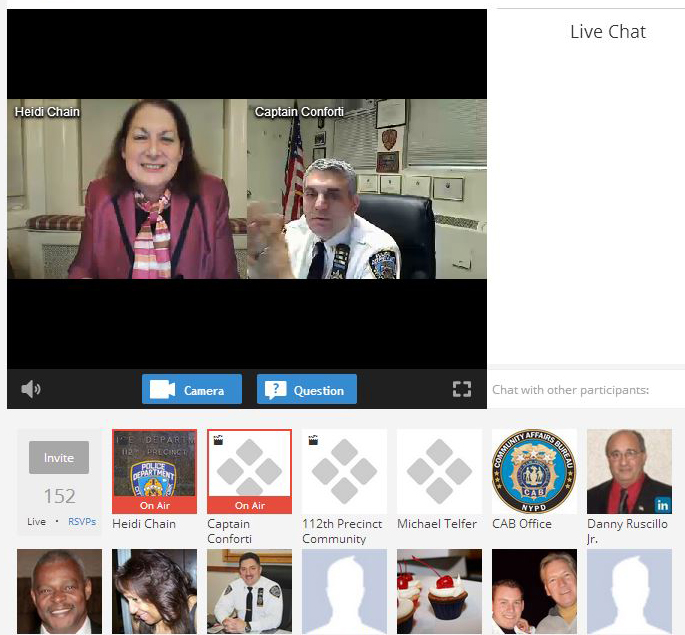 Audience members, some seen at the bottom of the photo, at the 112th Precinct Community Council virtual meeting on Monday evening were able to interact with their cyber hosts Community Council president, Heidi Harrison Chain, and the Commanding Officer of the 112, Captain Thomas Conforti. Patricia Adams/The Forum Newsgroup

One interesting twist to cyber Monday night saw the launch of an innovative approach to what could quite possibly be the future of community meetings, thanks to the 112th Precinct Community Council.

Several months ago, the commanding Officer of the 112, Captain Thomas Conforti, along with the help of Precinct Council President Heidi Harrison Chain, announced plans to hold virtual “Town Hall” meetings on line.

While “virtual meetings” were never intended to replace regular meetings, they were instead viewed as a means to reach members of the community who may not be able to physically attend.

The project was the brainchild of Commanding Officer Thomas Conforti, who said the idea first crossed his mind when he stumbled across the website Spreecast.com. The site, billed as a Social Video Platform, connects people through video conversation.

Conforti saw the potential to introduce the concept at the community level and was immediately intrigued about bringing the technology to the community council meetings and opening up access to so many more people. “It is not always possible for people to attend meetings,” said Conforti. “Dealing with family and professional obligations leaves many of our residents without the time to spend travelling to and from and attending meetings.”

And so the wheels were set in motion, according to Chain who said that the NYPD Department heads were unbelievably helpful during the arduous setup of the system. She thanked many of the Chiefs of Police at the onset of Monday’s cyber meeting for their attention to the matter and their support in setting it up.

The actual broadcast found Chain at her home with the captain, Community Affairs and Crime Prevention officers, all set up at the precinct.

Conforti led a discussion about department crime stats to analyze the burglary situation in the precinct and provided viewer with a link so they could pull up the stat sheet and follow along with his explanation. In addition to offering information about how to accurately interpret often confusing police stats, Conforti clearly demonstrated one aspect of the technology — being able to upload and read documents relevant to the current discussion.  He also showed several videos, most notably one concerning the implementation of the departments Operation Identification Program.

The platform also allows for audience members to participate either on camera, as allowed by the hosts, and to submit questions during the broadcast.

There were many technical glitches throughout the meeting and other first time bugs to deal with however those in attendance could not deny that the concept shows great potential as developing into a tremendous aid in crime prevention and crime fighting as well as the opportunity to get the police department more closely linked with the community simply by being able to reach so many more people.

The next meeting has not yet been scheduled and will be subject to the time required for all necessary technical adjustments to be made. For more details you can visit the 112th Precinct Community Council on Facebook at: www.facebook.com/112thPrecinctCommunityCouncil.