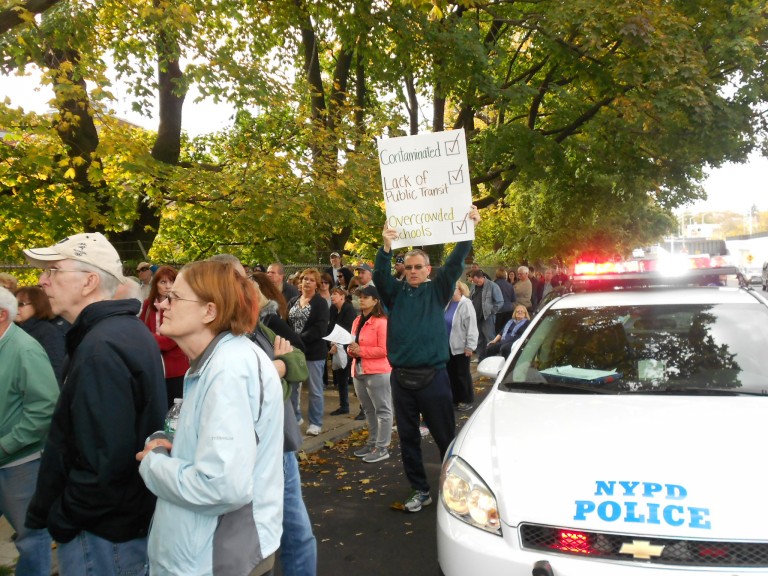 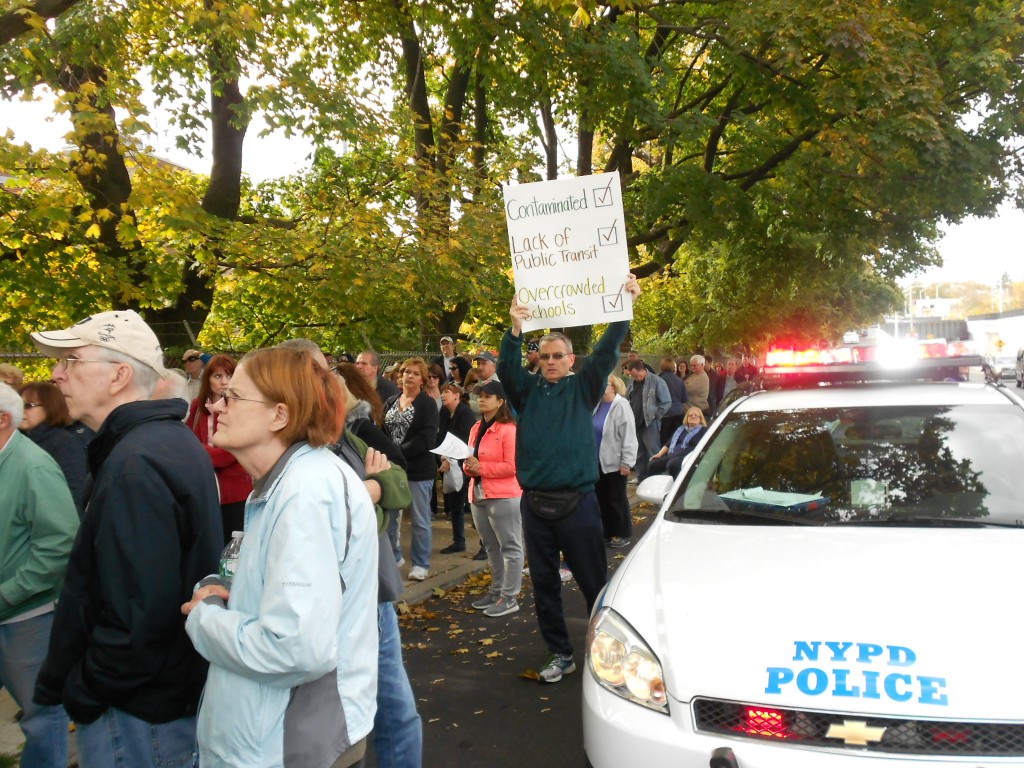 Many residents, including this man who attended a protest last month, have said there are numerous issues with the site proposed for a 125-family homeless shelter, including health concerns because of its use as a previous industrial cite, public transportation, and children fro the shelter overburdening crowded public schools. File Photo

Both political leaders and residents of Queens were matter-of-fact in their message to the city Department of Homeless Services last week: They do not want a homeless shelter in Glendale.

The city held a public hearing last Thursday to consider a proposed transitional housing facility at 78-16 Cooper Ave. that would house up to 125 families.

In early December, the DHS sent a letter to Mayor Michael Bloomberg’s office stating that the agency was considering awarding a five-year, $27 million contract to Samaritan Village, a nonprofit that would operate the facility.

Since rumors of the homeless shelter first began to circulate more than a year ago, Queens residents and political leaders alike have been outspoken against it.

Community members spent the better part of the most recent Community Board 5 meeting discussing the proposal. The board approved a formal resolution against the proposal last Wednesday and presented it at the hearing the next day.

The site was a manufacturing site for decades and has been vacant for years. It lies very close to brownfields and a superfund site; the facility itself is thought to be contaminated according to anecdotal evidence.

It lies within School District 24, the most crowded in the city. Community residents have raised concerns that the community could not handle an influx of children. Additionally, they say the site is unsuitable because it is not close to public transportation.

Samaritan Village said that if it did operate the shelter, it could not legally reject persons with a criminal background, which some believe could include sex offenders.

DHS, however, has stressed that residents of the shelter will likely be single women, including domestic violence victims, with children.

The hearing, along with a fiscal analysis and community impact analysis, marked the end of the first of a three-phase approval process that the proposal will undergo. The second phase will be an environmental impact review; DHS cannot place a shelter on any site deemed contaminated. Finally, the contract will have to be approved by the City Comptroller.

But according to Assemblyman Andrew Hevesi (D-Forest Hills), the comptroller’s role is to review the contract and comment on whether “the numbers add up,” rather than block the shelter altogether.

Hevesi said at the CB5 meeting that only 30 percent of similar proposals that go through this process are eventually approved.

Hevesi has spoken candidly about his opposition to the shelter and said he believes the proposal “is so full of holes that we could drive trucks through it.”

At the hearing on Thursday, state Sen. Joe Addabbo (D-Howard Beach) said that homelessness in New York City is an issue that should be taken seriously, “but not every proposed homeless shelter is an appropriate site.”

“I am sure that none of us would want to put anyone in harm’s way,” he said.

Councilwoman Elizabeth Crowley (D-Middle Village) said the city has a legal and moral obligation to assist the city’s homeless, but the city should use its limited resources in the best way possible to do that.

Changing the site for residential use would require intensive remediation and remediation, she said.

Crowley said the funds should instead be used to address the immediate need of the 50,000 homeless families that exist right now in the city.

“I think approving this contracting and spending over $27 million for the shelter would be fiscally irresponsible and a serious misallocation of funds,” she said. “Think of how much further we could use $27 million.”