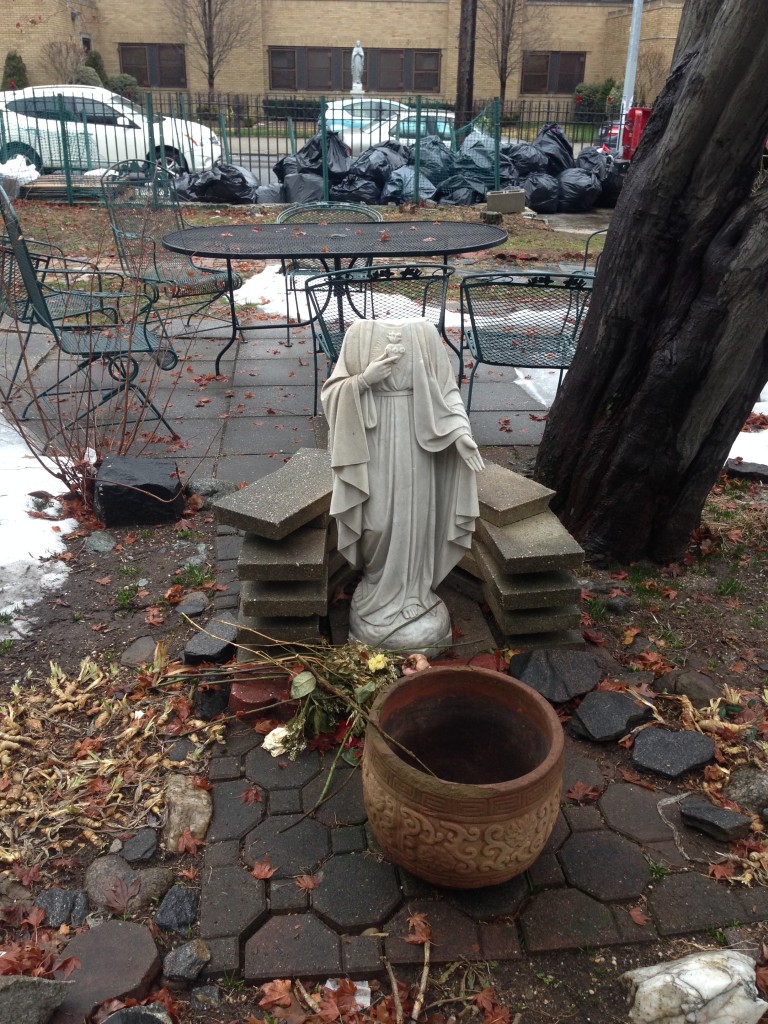 Tucked away in the yard of an Ozone Park church that has been in the community for more than 100 years, St. Mary Gate of Heaven, a stone statue of the Blessed Mary was, for decades, a welcome site, its peaceful hand perpetually outstretched to those who needed it.

The four-foot statue had been the site of many a communion photo, a place where residents – young and old, from Queens and from countries from all corners of the world – would go when they needed a break from the chaos of life.

And it was always there, in the church’s garden, for years and years. It was a symbol, for those who moved out of the neighborhood and those who remained, of continuity. From those who donned bell bottoms to those who swayed to the sounds emanating from headphones, the statue has been a constant presence – and, often, a reminder of their childhood in South Queens. Sometimes, people who grew up attending the St. Mary Gate of Heaven Church or School but moved away from the neighborhood as adults would return just so they could pray by Mary.

This, residents said, is why they do not consider the decapitation of the statue, which was discovered without its head on Monday morning, just a crime. To them, it was an act filled with hate and spite against a religious community that has done nothing but work to help the neighborhood for the past century.

“The fact that anybody can desecrate a religious symbol is a disgrace,” said Frank Gulluscio, a longtime member of the church on 101st Avenue and 103rd Street in Ozone Park. “St. Mary Gate of Heaven has been there for over 100 years. It’s well known throughout the city and neighborhood, and it’s well respected.

“At the end of the day, it’s scary,” Gulluscio continued. “What do you tell the kids at the school?”

Officials from the church and the school did not respond to requests for comment.

The 102nd Precinct is investigating the matter, and Gulluscio said he believe the cops will “do their due diligence” and track down the perpetrator – or perpetrators.

“As a Roman Catholic, I am outraged,” said Councilman Eric Ulrich (R-Ozone Park). “Whoever is responsible for this act of desecration should be brought to justice. Churches and other houses of worship are holy places, and anyone who vandalizes statues or other religious objects should be held accountable.”

“It’s an absolute disgrace,” he said. “No crime should be tolerated, particularly when it’s committed against our religious institutions. There’s no room for hate of any kind in our community, and I’ll do whatever I can to ensure it never happens again.”

Mary Burrier, who grew up attending the parish, said she cried when she saw the photos.

“I am horrified that someone would do something like this to a statue that has been there since  I was 4-years-old, which is 42 years,” Burrier said.

She went on to say that when the criminal “purposely cut off the head of the Blessed Mary statue that is the symbol for both the church and the school, that’s a little deeper than discrimination – that’s pure hate.”

Like many of those who know the church well, Burrier stressed how important it has been to parishioners to lend a hand – throughout their community and beyond.

“We are all out on this earth to help people, and when you do something that has no rhyme or reason you have a real problem,” she said. “I went to SMGH. I cried when I saw the picture. That there is a person out there who has such hatred inside of them to do this is beyond me. I wish that the church had a surveillance system, and they knew who did it because they should be made an example of.”

According to those in the area, there are no nearby security cameras, and residents have said they would like to see St. Mary Gate of Heaven, as well as other area religious institutions, equipped with better security in order to prevent something like this.

Goldfeder noted that there is federal funding through the Urban Areas Security Initiative Nonprofit Security Grant Program for religious institutions.

No matter what happens – with security, with the perpetrators – residents said they hope to remember, that even now, even in the worst of times, Mary’s hand is still there, reaching out to them. An awful crime was committed, but the church community remains, reminding everyone that while hate can destroy, it runs away. Love, they said, is what stays.