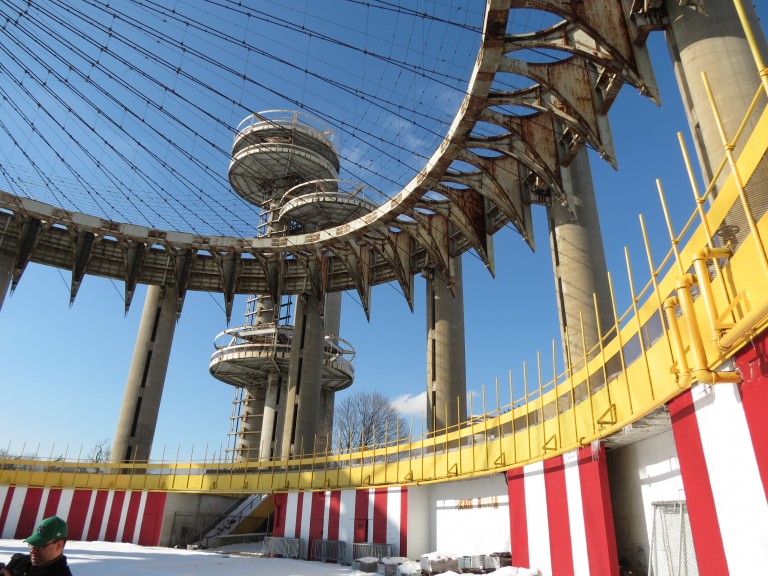 The New York State Pavilion, which was built for the 1964 World’s Fair, has been deteriorating for decades. Photo by Anna Gustafson

Shivering in the deep cold of February and standing amidst the decay that has become the New York State Pavilion in Flushing Meadows Corona Park last week, elected officials and area preservationists last week walked the iconic space that was once crowded with thousands of people from across the world but has been deteriorating for decades and pledged to preserve the historic site that was built for the 1964 World’s Fair.

For area leaders, last Thursday’s tour of the pavilion led by Borough President Melinda Katz was a major feat – an event that marked what many said will finally culminate in the revitalization of a site that held the Tent of Tomorrow, the Observation Towers, and the Theaterama during the 1964 World’s Fair. The Theaterama became what is now the Queens Theatre, but the Tent of Tomorrow and the Observation Towers have remained largely untouched, creating a site beloved by many Queens residents but almost entirely inaccessible to the general public for years.

It was a high point for Queens’ preservation community that has been both lifted and devastated in the past week, with the tour preceding Saturday night’s untimely death of 28-year-old Christian Doran, a Maspeth resident and co-founder of Pavilion for the People.

“It was really unbelievable for us, being on the tour with the borough president,” said Matthew Silva, a friend of Doran’s and another co-founder of People for the Pavilion. “We kept pinching ourselves to make sure it was real. I hope one day we can go to the opening of the new New York State Pavilion – that day will be bittersweet because we thought Christian would be there.”

Katz and a myriad other elected officials, including Assemblywoman Marge Markey (D-Maspeth), Councilman Rory Lancman (D-Fresh Meadows), Deputy Borough President Leroy Comrie, and Assemblyman Michael Simanowitz (D-Flushing), agreed Thursday that they want to see the structure preserved – though what exactly that will entail they said has yet to be defined. 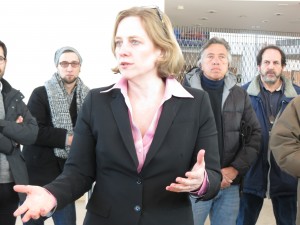 Borough President Melinda Katz, center, led a tour of the New York State Pavilion last Thursday, when she threw her support behind preserving the historic structure. Behind her stands People for the Pavilion co-founder Christian Doran, who died Saturday night at the age of 28. Photo by Anna Gustafson

“This was a significant site,” Katz said. “This was the site of the World’s Fair. This is Queens – this is part of what people look for when they get off the planes.”

Designed by architect Philip Johnson, the Tent of Tomorrow measured 350 feet by 250 feet, with 16 100-foot columns suspending a 50,000 square foot roof of multi-colored panels. The popular exhibit also held three towers, measuring 60 feet, 150 feet and 226 feet. The two shorter towers held cafeterias for the fair, and the tallest tower, as the highest point of the World’s Fair, held an observation deck. One of the most spectacular features of the exhibit was the Texaco Company’s map of New York, which was designed with 567 terrazzo mosaic panels, each weighing about 400 pounds. The $1 million map featured 50,000 square miles of New York state in meticulous detail.

After the World’s Fair, the tent was used as a roller skating rink but by 1976, the roof had become unstable and the tent was removed, leaving the map to be damaged by the forces of weather. A Parks Department representative said during the tour that the city conserved four of the map’s tiles.

“When I walked in here, I knew this was an important place; I knew this had to stay,” said Jean Silva, a Forest Hills resident and president of the Flushing Meadows Corona Park Conservancy.

For Doran, the site was representative of a spot that could become a fully functional part of the park, a community space that would draw people from across the borough, city and beyond.

“He felt like it’s a space that the community of Queens should be able to share,” Silva said of Doran. “That’s something he really, really cared about.”