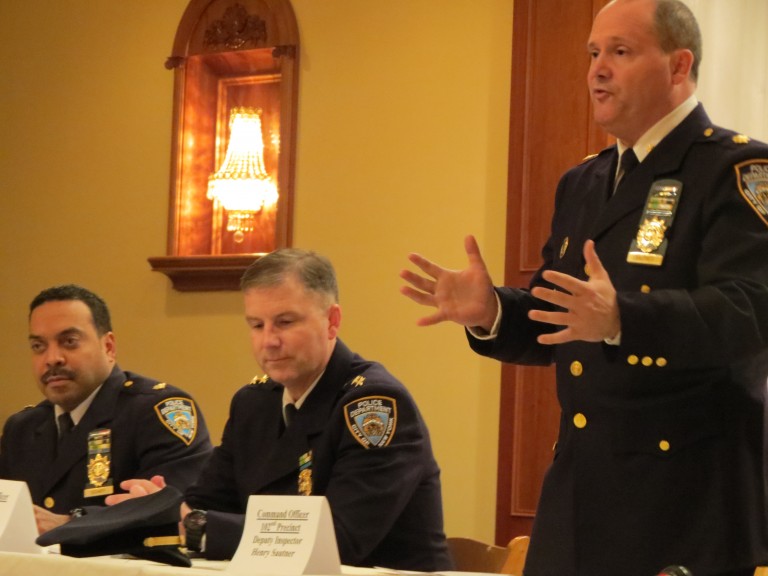 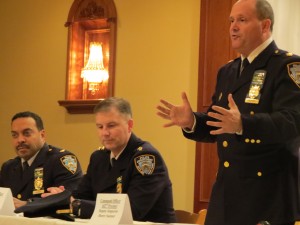 The number of reported domestic violence cases has increased dramatically in South Queens – but police said such a spike is only the tip of the iceberg to representing the magnitude of the crime in the area, and officers are urging victims to speak up about what they said is an epidemic that has taken root across not just the borough, but the entire country.

The plea for victims to reach out – whether it’s to police or a variety of domestic violence groups in Queens – came at a forum last Thursday in Richmond Hill sponsored by the 106th and 102nd precincts that police said was prompted by the large number of domestic violence cases in the borough – and the fact that they believe there are far more crimes occurring than are being reported, in part because officers said many individuals who may not speak English as their first language feel hesitant or wary of contacting police.

Along with Schiff, Deputy Inspector Henry Sautner, commanding officer of the 102nd Precinct, which covers Kew Gardens, Richmond Hill, Woodhaven, and the northern section of Ozone Park, helped to sponsor the forum at the Fairfield Pavilion, which he and Schiff said is the first in a series of similar events planned for the area.

At last week’s event, police and representatives from the Queens Family Justice Center – a program of the mayor’s Office to Combat Domestic Violence – and Safe  Horizon, a victim assistance organization that offers a variety of services, from 24-hour hotlines to safe shelter and mental health counseling, touched on a wide range of topics, from an outline of the general problem to what happens when a domestic violence report is filed and services available for victims and their families.

Calling domestic violence a “social epidemic because it affects everyone,” Lazarus noted the different kinds of domestic violence – among them physical, sexual, financial, and emotional – and stressed that “it’s important to document and report all instances even if there’s not an injury.”

“If there’s yelling, insulting – that needs to be documented,” she said.

The sergeant went on to address the fact that it can be “difficult for people to walk away” from a domestic violence situation, noting that a victim may feel they don’t have the financial means to do so, they’re concerned about their safety and that of their children or other family members, or they do not want to be isolated from their community.

“That’s what we train our officers in – officers cannot walk into a household and pass judgement on why someone hasn’t left,” Lazarus said.

Officers also stressed the importance of community and religious leaders spreading the message that no matter what language one speaks or immigration status they face, anyone who is being harmed should contact the NYPD.

“It’s underreported because some members of other cultures can be intimidated” to contact police, Schiff said, adding that abusers can tell their victims that they will be deported if they reach out to authorities – which is false; several of the officers stressed they are not allowed to ask what an individual’s immigration status is when responding to an incident.

Both Schiff and Sautner said that no matter what language one speaks, the NYPD has access to officers who speak the language and can translate reports from the original language into English.

The NYPD recently came under fire for not translating a report filed in Spanish by a Jamaica woman, Deisy Garcia, who was murdered last month with her two young daughters. According to a report in the New York Post, Garcia filed a report in May saying she believed her husband, Miguel Mejia-Ramos, was going to kill her and her children. Mejia-Ramos has been charged with murdering his wife and daughters.

In response to the report that this document, as well as another one filed in November, were not translated after being submitted to the 103rd Precinct, the NYPD sent out a message to all the precincts that all reports made in foreign languages must be translated into English as soon as possible.

“If you feel you’re more comfortable speaking your language, we have those resources; we’ll do that work to get somebody to communicate to you in your language,” said Sgt. Diana Silverstein, of the 102nd Precinct’s domestic violence unit. “We want the correct information.”

Representatives from the Family Justice Center, which offer walk-in centers for all domestic violence victims and their families in Queens, Brooklyn and the Bronx, noted that they offer a long list of services for victims, including counseling, legal information, support for children, elder abuse services, and spiritual support. The Queens Family Justice Center is located at 126-02 82nd Ave. in Kew Gardens. The center’s number is 718-575-4500.

An official from Safe Horizon also stressed the resources available for victims and their families, saying her group provides confidential shelters, a counseling center, help with immigration law, and a wide variety of other issues.