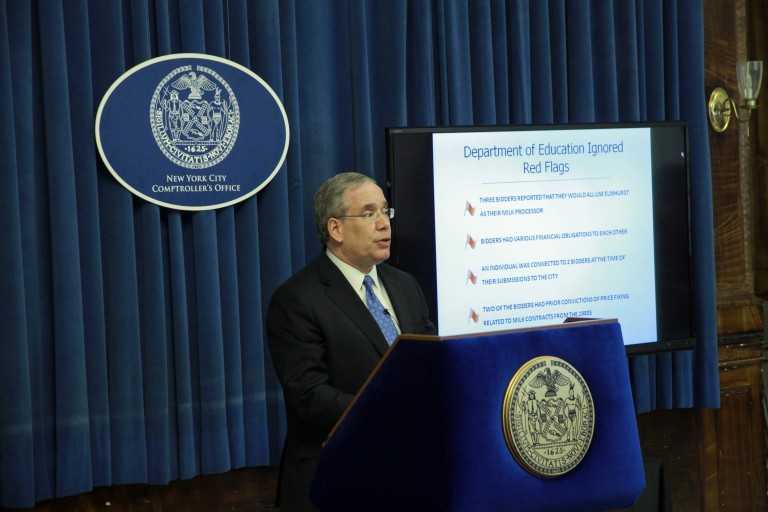 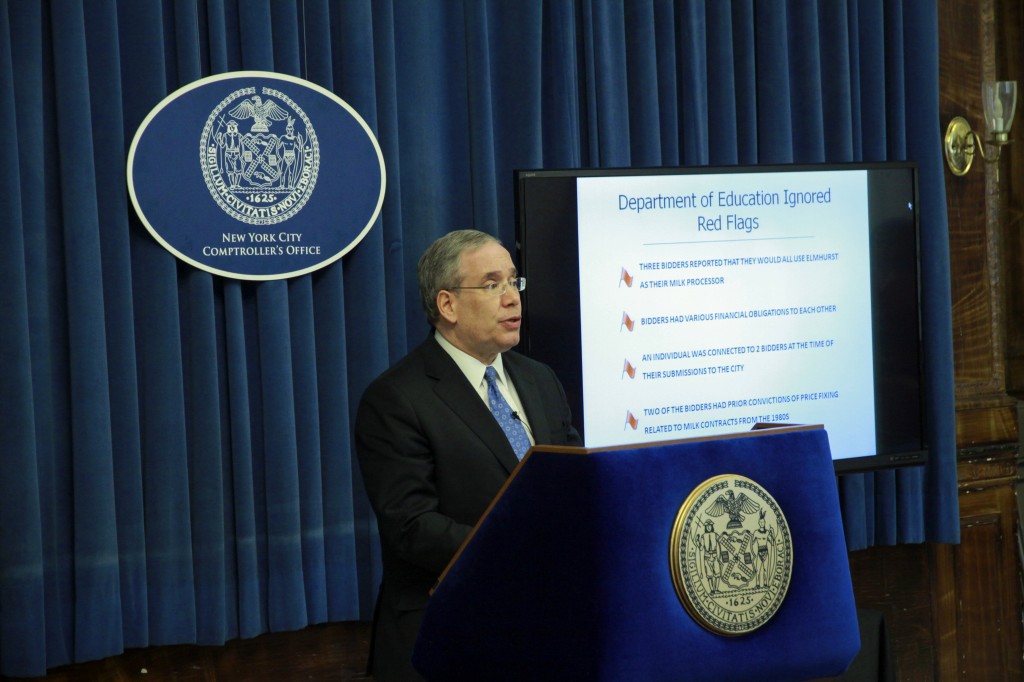 A recent audit released by City Comptroller Scott Stringer says that questionable procedures used by the city’s Department of Education could have resulted in collusion among three of its milk vendors that were awarded city contracts in 2008 totaling more than $134 million.

Stringer’s audit revealed that three Jamaica-based milk vendors — Beyer, Bartlett and Elmhurst — became business partners shortly after the contracts were awarded by the  DOE in 2008.

“We see possible collusion when rival bidders become business partners within two months of being awarded contracts,” Stringer’s report stated.  “Instead of doing its due diligence, DOE needlessly put taxpayers at risk.”

The DOE system educates more than one million pre-kindergarten to 12th grade students in more than 1,700 New York City schools.  These schools serve more than 850,000 meals each day to students.

The audit looked at three contracts worth $134 million for the supply and delivery of milk to city schools from November 2008 to August 2013.

The comptroller’s report found that DOE lacked sufficient controls to detect warning signs of even possible collusion. Beyer and Elmhurst ended up subcontracting most of their work in October 2008 to their former competitor, Bartlett.

Beyer filed for bankruptcy in 2012.

“Mr. Stringer’s allegations are false and defamatory.  Bartlett Dairy, Inc. which is headquartered in Queens, has been in business for more than twenty years and employs more than 100 New Yorkers.  It has provided hundreds of thousands of schoolchildren and other New Yorkers with high quality products and reliable service every day, year after year.  Every contract it has been awarded has been the result of competitive bidding and bids are made for competitive reasons – –   Bartlett Dairy, Inc. has done nothing wrong.”

And, while Stringer’s report did not find conclusive evidence of collusion, there were numerous warning signs that the milk vendors had unusual connections.

Some of those connections included joint use of milk delivery vehicles as well as an executive of one company who had organizational ties to another bidding company.

Recommendations from Stringer’s office to the DOE include the development and implementation of procedures to govern the review of the financial capacity of low bidders for milk distribution contracts and develop and implement adequate procedures to detect the warning signs of possible collusion.

Representatives from the DOE and Elmhurst Dairy did not respond to requests for comment by press time.