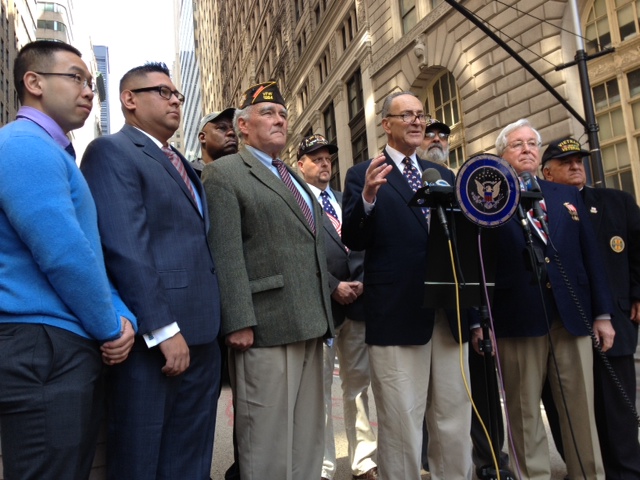 Standing along the historic “Canyon of Heroes” route in lower Manhattan, U.S. Sen. Chuck Schumer (D-NY) and a group of veterans this week urged the city to work with the U.S. Department of Defense to host a celebration welcoming home individuals who served their country in Afghanistan and Iraq.

The legislator; Vincent McGowan, a Vietnam Marine veteran and founding president of the United War Veterans Council of New York; and representatives of the Iraq and Afghanistan Veterans of America, as well as former military men and women of all ages, on Sunday launched a campaign advocating for the first welcome home parade for the country’s post-Sept. 11, 2001 troops in New York City.

Specifically, the senator urged the DoD to work with city officials to begin planning the event. Throughout history, the country has held a parade in New York City for troops returning home from war, but one has yet to be planned for Iraq or Afghanistan veterans.

“In years past, we’ve honored our troops with a parade along the iconic ‘Canyon of Heroes’ routes, and those who served in these post 9-11 wars also deserve a hero’s welcome – and New York is the only place to do that,” Schumer said. “With the completion of the Afghanistan combat mission expected at the end of this year, and with Iraq’s official end far behind us, it’s time for New York to stake its claim and for the Department of Defense to join in planning this welcome home celebration.”

McGowan echoed this sentiment, stressing the psychological importance of such an event for the men and women who put their lives on the line for their country.

“New York City is the best place – the only place – to host a national welcome home parade for the latest generation of veterans,” he said.

Mayor Bill de Blasio said he welcomed the idea with open arms. The DoD did not respond to a request for comment, but other published reports said the department is reviewing the request.

“The brave men and women who have selflessly served our nation with courage and skill in Iraq and Afghanistan deserve recognition for their sacrifice,” de Blasio said. “I stand with Sen. Schumer in his call for a parade to honor our veteran heroes, and New York City would be proud to host this important event.”

Councilmen Eric Ulrich (R-Ozone Park) and Jumaane Williams (D-Brooklyn) have also thrown their weight behind Schumer’s call, and the two are co-sponsoring legislation calling for the creation of a ticker-tape parade. Ulrich will hold a hearing next month in support of the bill.

“I can think of no better way to honor our veterans and returning service members who so gallantly served in Iraq and Afghanistan,” said Ulrich, the chairman of the Council’s Committee on Veterans. “…The time has come for New York City to bestow this unique and deserving welcome home celebration down the ‘Canyon of Heroes’ on those who have borne the battle.”

The Iraq war officially ended on Dec. 31, 2011. The combat mission in Afghanistan is expected to be complete by the end of 2014. In referring to Afghanistan, President Barack Obama stated in his 2014 State of the Union address that, “together with our allies, we will complete our mission there by the end of this year and America’s longest war will finally be over.” DoD officials have said a parade should not occur until combat operations in Afghanistan are complete – but Schumer said the time is now to begin planning.

After each war in modern history, parades have been held for returning veterans, including a ticker-tape parade in 1946 following the end of World War II. There was a parade for Vietnam veterans in 1985 – 10 years after the war ended, and a victory parade was held in 1991 for Gulf War veterans.