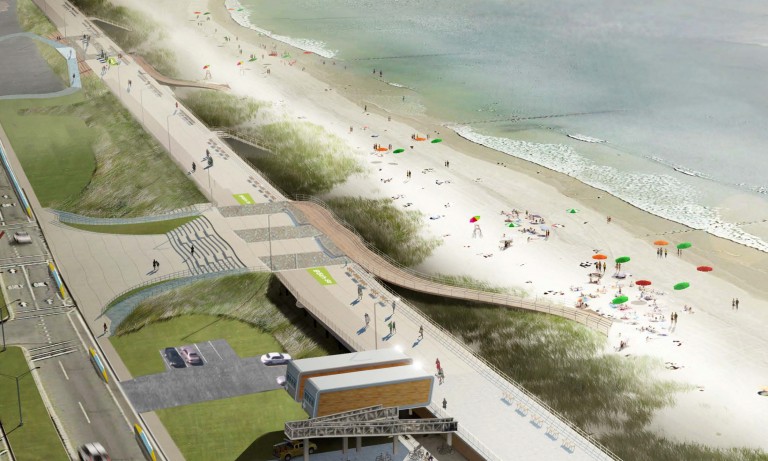 This draft rendering, which is still waiting for final approval, shows what officials imagine the finished Rockaway boardwalk to look like once it is completed by 2017. Rendering courtesy NYC Parks

Construction began this week on the Rockaway boardwalk, an iconic structure that residents from throughout the city flocked to for decades before much of it was destroyed by Hurricane Sandy more than 17 months ago, according to city officials.

A Parks Department spokesman, Zachary Feder, said workers began preparing their construction site this week, including putting fences up around the area, and said the actual demolition process of removing old pieces of the damaged boardwalk was scheduled to begin later this week.

The work symbolizes the launch of the first portion of the $274 million boardwalk reconstruction project, for which there will be three different phases. The first phase, which is slated to be completed by Memorial Day 2015, includes rebuilding the boardwalk from Beach 86th Street to Beach 97th Street. The entire boardwalk is expected to be reopened by 2017.

“It’s all being done as quickly as possible,” Feder said.

While residents said they were pleased that construction is beginning, they lamented that the city did not more quickly rebuild the boardwalk, which annually draws throngs of beach goers to the structure that ran 5.5 miles from Far Rockaway to the edge of Belle Harbor.

“Long Beach got its boardwalk back with emergency funding – Rockaway could’ve done the same thing,” said John Cori, co-founder of the Friends of Rockaway Beach. “Someone decided instead to build these lifeguard shacks. That’s what you chose to do instead of rebuild the boardwalk?”

Last year, the city spent about $105 million to place bathrooms and lifeguard stations along city beaches, including in Rockaway, Staten Island, and Brooklyn – and the move was panned by a number of civic leaders, like Cori, who said the areas were in far greater need of other resources following the devastation wrought by Sandy.

Cori also joined a number of elected officials in calling for the city to complete the project before its current 2017 deadline. U.s. Sen. Chuck Schumer (D-NY) said last month that he hopes to work on a date more compatible with the hopes of Queens residents.

“I’m going to work to get a boardwalk as quickly as possible,” Schumer said during a press conference about flood insurance in Belle Harbor last month.

Queens Borough President Melinda Katz has also said she aims to have the boardwalk soon reopened, saying in a press release that she “saw no reason why the Rockaway boardwalk should not be fully repaired before the city’s current 2017 date.”

But Parks officials stressed that residents will be able to use a portion of the boardwalk by this summer.

“There will be three and a half miles of boardwalk available – a combination of old and new boardwalk,” Feder said. “There will be about a 2.5-mile continuous stretch; they can go for a jog or a bike ride there.” 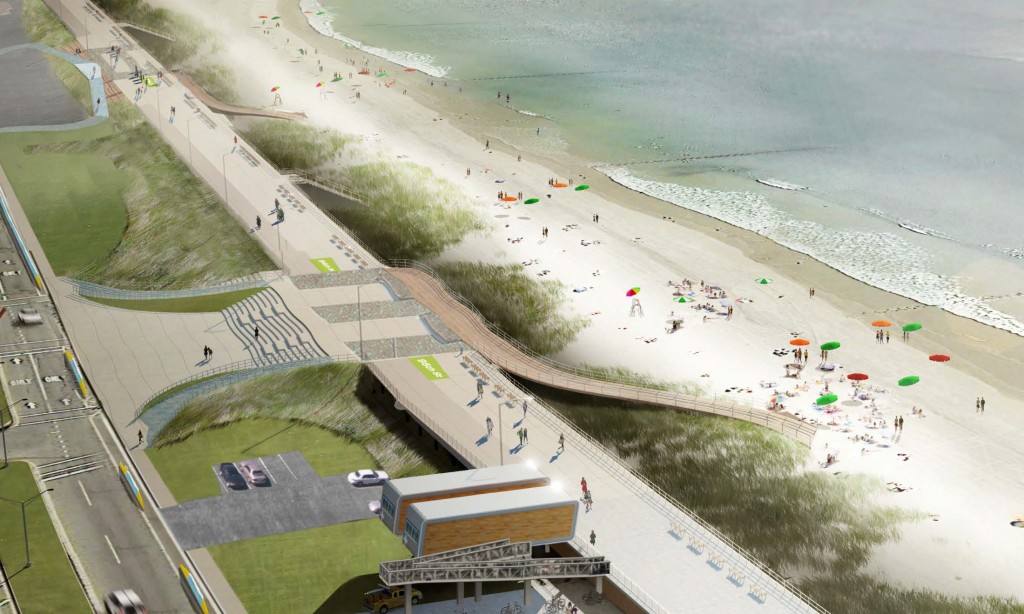 Construction began this week on the Rockaway boardwalk. This rendering is a draft image and is still waiting for approval to become an official plan. Rendering courtesy NYC Parks