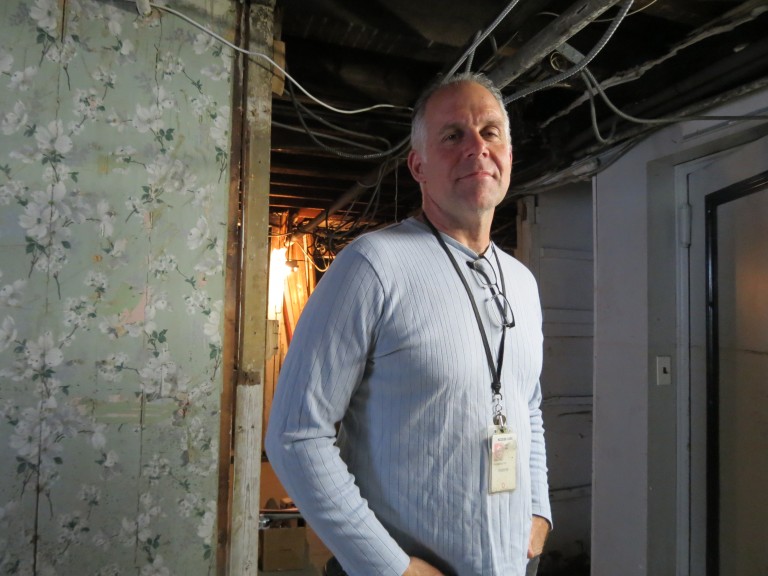 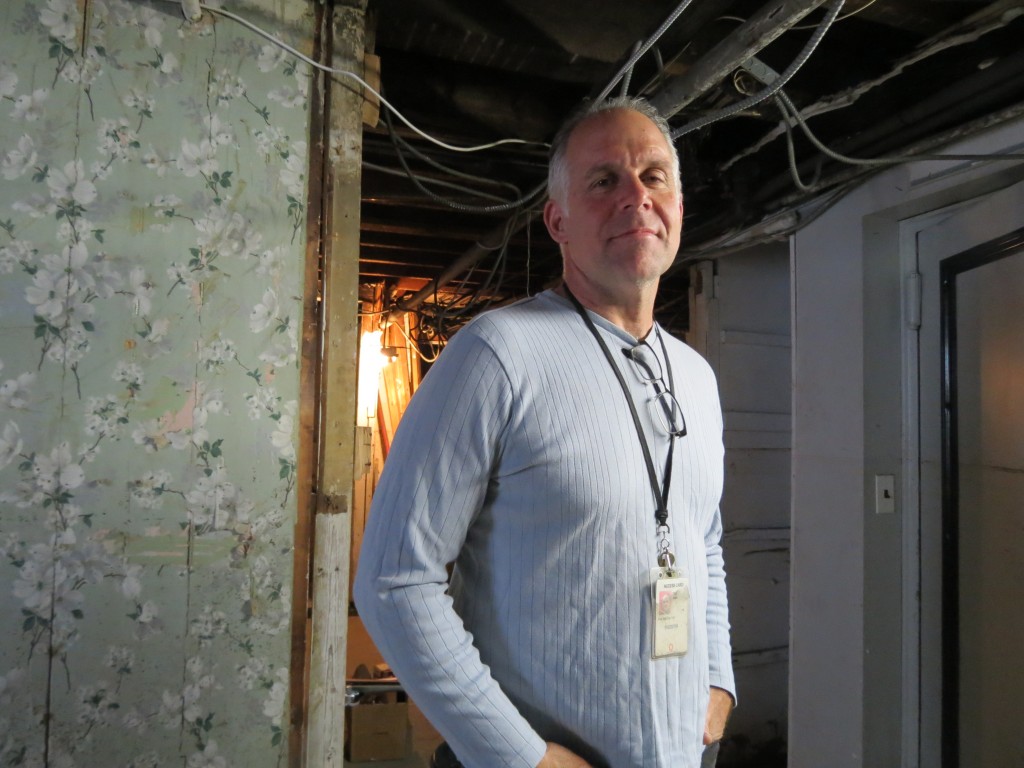 John Cori stands in the basement of his Rockaway Beach home that was devastated during Hurricane Sandy. Photo by Anna Gustafson

The Build It Back office at Fort Tilden in Breezy Point is a sea of gray: gray carpeting and gray cubicles spread out across an expansive room where workers speak in a flood of acronyms that, when deciphered, essentially seem to mean much of the same – the help residents applied for following Hurricane Sandy has not, 18 months after the storm, yet arrived.

This isn’t to say the employees at the Build It Back center – where denizens of South Queens and Rockaway must go when they need to speak with someone from the program that was originally set up by former Mayor Michael Bloomberg in an attempt to assist people trying to rebuild their homes in the wake of Sandy – aren’t trying to help on an individual level. Last Friday, when Rockaway Beach resident John Cori went to the office, he was greeted cheerfully by people who had worked with him before and was seen pretty much as soon as he walked into the site.

But, Cori stressed, well-intentioned individuals seem to be swallowed by a system that everyone from homeowners to elected officials have lambasted as an abysmal failure. When Mayor Bill de Blasio replaced Bloomberg in January, construction had started on zero homes in the Build It Back program and just one reimbursement check had been issued. That number has grown, with 17 homes currently undergoing construction citywide – including five in Queens – and 79 checks being issued to reimburse individuals for Sandy-related work they already paid for – but these numbers, Cori and others have said, seem overwhelmingly small when compared to the approximate 20,000 people who have applied for assistance. Of those who have reached out for help from the city program that is being funded with federal dollars, many remain unable to move back into homes, on which they are still paying a mortgage, and others have taken out thousands of dollars in loans or emptied retirement savings and children’s college funds to pay for repairs to homes destroyed in a storm that brought a level of destruction residents had never seen in a lifetime.

Like every single applicant with whom The Forum has spoken, Cori’s Build It Back paperwork has been lost – he has been told six times that documents he supplied could not be found – and he has never been contacted by city officials about the status of his application.

“The fact that this is still going on to this day is incredible,” Cori said as he waited on word about the status of his application at the Fort Tilden office last Friday. “They’re hoping people just give up.”

And while some residents have stopped pursuing Build It Back, many have said they continue to battle the red tape because they are hemorrhaging financially, with the storm leaving some to shell out six-figure dollar amounts to be able to move back into their houses.

Amy Peterson, who de Blasio recently appointed as the new head of Build It Back a little more than one month ago, is urging individuals to not completely lose faith – though she has conceded at recent meetings in South Queens that she knows the program has a long way to go before it gains the trust of residents whose lives were turned upside down by Sandy – and who have, for the past year and a half, taken on what is a basically a full-time job battling insurance companies and government agencies for the aid that was promised to them.

“It’s very clear, 18 months after the storm, the program is not working the way it needs to work,” Peterson said at the Howard Beach-Lindenwood Civic meeting Tuesday night.

“But do not give up,” she continued.

De Blasio too is urging residents to keep faith in city government, saying that Sandy aid is one of his administration’s top priorities. In mid-April, the mayor and members of his Sandy leadership team held a press conference on Staten Island to announce a major overhaul of the recovery effort. At that time, the mayor vowed that construction would begin on 500 homes, and 500 checks would be issued to reimburse residents for money they have already spent on repairs, by the summer’s end.

“We’re here at the Staten Island Build It Back center to announce a major overhaul of the city’s Sandy recovery effort, which has been, let’s be blunt, overly complex and confusing for homeowners over the last year and a half,” de Blasio said at the press conference. “We know we have to do things differently, better, faster. We have to serve people in need right now. Over the last three and a half months my administration has been working day and night to hack through the red tape – and there’s been a lot of red tape to hack through. And our singular goal has been to get the recovery money where it belongs – into the hands of needy homeowners and community residents.”

As part of the same event, the de Blasio administration released a report on the city’s response to Sandy, including a long list of recommendations to provide financial relief to homeowners and businesses and engage communities directly in the rebuilding process.

Detailed in the document include a call to assign staff from the city Department of Buildings to work on Build It Back exclusively and eliminate priority levels to ensure that no applicant’s income will be used as a reason to disqualify him or her from accessing program funding. Previously, many residents in South Queens and Rockaway had been told they would not be labeled as a priority for Build It Back – meaning they may never receive funding – because they had too high of an income. Among those being told that were seniors on fixed incomes and families with two parents who worked such middle-class jobs as firefighters and teachers.

De Blasio said the city would also offer residents relief from paying city water bills for homes still vacant following Sandy, as well as appoint borough directors in Queens, Staten Island, and Brooklyn who have the authority to direct city agencies to increase engagement with individuals impacted by the hurricane. He also promised to bring Build It Back staff directly into the community, including at various elected officials’ offices, among other initiatives.

An entire copy of the report may be viewed at http://www1.nyc.gov/assets/home/downloads/pdf/reports/2014/sandy_041714.pdf.

Since Peterson has taken the reigns, elected officials said they’ve seen a difference when it comes to the effectiveness of the city’s Sandy recovery process – though they stressed that while there are indications of positive movement, places like South Queens, Rockaway, South Brooklyn, and Staten Island are far from recovered.

“All the positive movements we’re seeing are not a sign that everything is back to normal, that everything’s working well,” Assemblyman Phil Goldfeder (D-Rockaway Park) said. “All the things we’re hearing are good signs, but we’re not where we need to be.”

That, Cori said, is abundantly apparent in each of his dealings with Build It Back. After meeting with officials Friday afternoon, Cori was told to return Monday – when he was hopeful that he may actually get information that would shed some light as to when he could expect financial assistance to arrive – and how much. Instead, he said the Build It Back officials “were not ready.”

“My advice to every applicant is to check on their claim in person at least once a week,” Cori said.

After spending tens of thousands of dollars, and countless hours, repairing his Rockaway Beach home, Cori said he’s not only looking forward to the day he never again has to utter the words “Build It Back” but can return to a home blissfully free of needed repairs.

“I’m looking forward to the day when I can show up to my house and do nothing,” Cori said as he sat on his front porch and looked towards his neighbors houses, rows of structures where others too are waiting for the assistance for which they applied long ago.