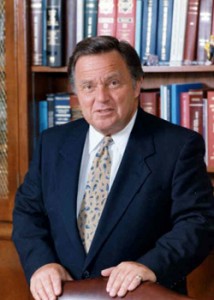 Queens District Attorney Richard Brown, first elected to his position in 1991, may face at least one challenger in next year’s election.

After rarely facing serious challengers in an election and often garnering bi-partisan support, Queens District Attorney Richard Brown may find himself in a race with at least one opponent next year, according to a borough religious leader hoping to end Brown’s tenure.

Rev. Charles Norris, a well-known religious leader in southeast Queens who founded Bethesda Missionary Baptist Church in Jamaica, said he is actively searching for a candidate to run against Brown, who has handily won each election after first being elected in 1991. Brown has frequently landed support across the political spectrum and has run on various party lines in the same election, including the Democratic, Republican, Conservative, Liberal, and Independence lines.

Saying he’s speaking with “several lawyers and judges,” about running, Norris has not named specific individuals but said he hopes to soon line up a candidate to challenge Brown.

“DA Brown has not done anything for African-American people in this county,” Norris said in an interview with The Forum on Monday. “… We need someone looking out for all of the people, not just white people.”

The religious leader went on to say that  “every time (Brown) gets in assistant district attorneys – he’ll get 20 or 25 each year – he’ll have one minority in the group. What is that?”

“I believe that most fair-minded people would agree that the Queens County District Attorney’s office’s minority representation among its professional and support staff compares favorably with other prosecutors’ offices across the city and state and is representative of the diversity of our county,” Brown said. “At the same time, we are committed to achieving greater diversity and inclusion.”

The DA’s office also pointed out that the majority of Queens’ assistant district attorneys are graduates of New York state law schools, and a review of those institutions’ demographics showed an average enrollment of students identified as “black or African-American” to be 5.9 percent. Just one of the state’s law schools has an enrollment of African-American students greater than the Queens office’s 10.4 percent.

Brown’s office also noted that the New York Law Journal compiles an annual report on the statistical breakdown of professional staff in New York’s DA’s offices. In its report published in June 2013, the journal listed the percentage of minorities in the Queens DA’s office as 26.1 percent. Bronx County had 27.8 percent, Kings County was listed at 27.6 percent, New York County was documented at 23.1 percent, and Richmond County was reported to have 20.1 percent. The percentage of minorities for the U.S. Attorney’s offices for the Eastern and Southern districts hovers around 18 percent.

These percentages are higher than the private sector. In February, the National Association for Law Placement issued a report titled, “Women and Minorities at Law Firms by Race and Ethnicity – an Update,” which stated that the percentage of partners at city firms identified as minorities is 8.3 percent, with 1.8 percent identified as black or African-American. The percentage of associates identified as minorities at city firms was reported to be 24.76 percent, with a little more than 4 percent being described as black or African-American.

According to a recent analysis of the Queens DA’s support staff – including detective investigators, paralegals, stenographers, and secretaries – 19.3 percent are African-American, 20.9 percent are Hispanic, and 5.1 percent are Asian.

Still, Norris said he and others in Queens’ African-American communities want to see a DA representative of a borough that is made up of more than 60 percent minority groups.

“I think a person needs to go when they’re not effective,” Norris said.

Peter Vallone Jr., a former three-term Councilman and longtime chairman of the Council’s Public Safety Committee, has also been rumored to be looking at a run for Queens District Attorney.

When reached this week, Vallone, who recently joined Gov. Andrew Cuomo’s administration as a special assistant to the state’s corrections commissioner, said he is “very happy working with Gov. Cuomo, and I haven’t made any decisions about a future run for office.”

One political insider from Queens, who did not want his name to be published because he often sees Norris, said there are dissenting opinions in the borough’s southeastern community as to the kind of support Brown has in the area.

Norris’ announcement comes on the heels of former Kings County District Attorney Charles Hynes, a veteran incumbent, being unseated by the current Brooklyn District Attorney Ken Thompson. Thompson defeated Hynes, who had served as the DA since 1990, 55 percent to 45 percent in September’s primary. Hynes went on to run on the Republican party line in November and, again, Hynes claimed victory, winning 75 percent of the vote.

Thompson’s win was the first time since 1955 that a challenger claimed victory over a sitting district attorney in New York City.