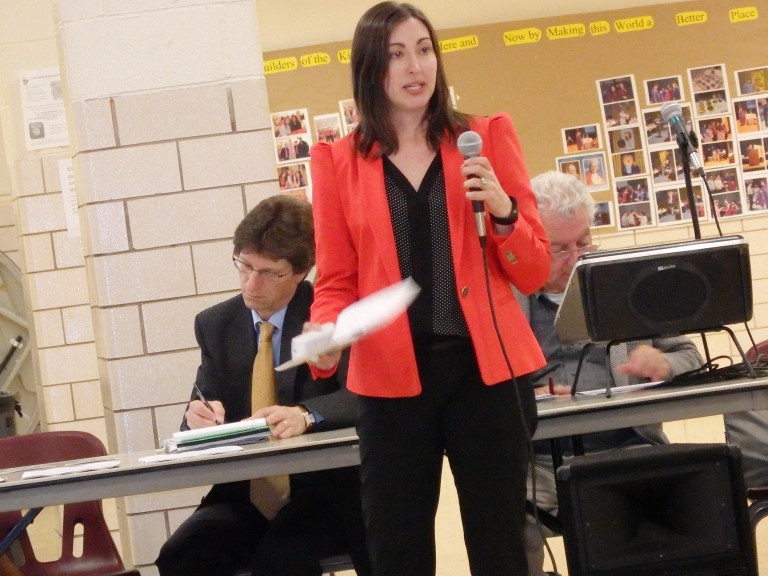 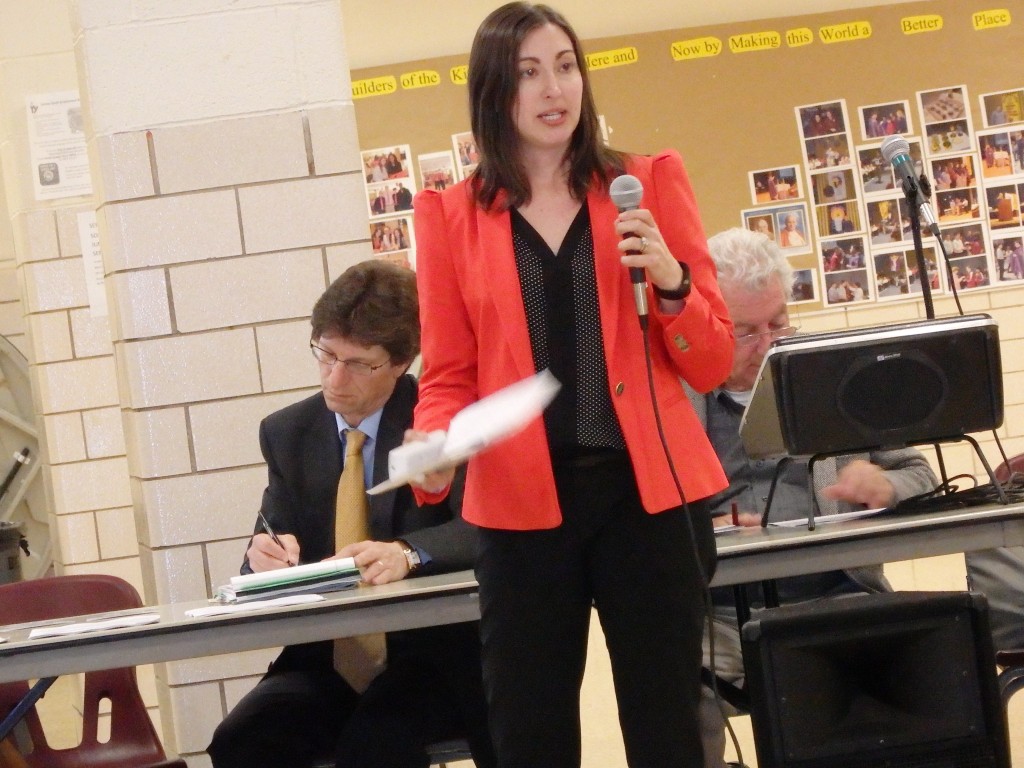 DOT Nichole Altmix said the agency was still working on safety upgrades for Myrtle and Wyckoff avenues near Palmetto Street in Ridgewood. Photo by Phil Corso

A series of traffic enhancements are still being perfected for a busy intersection on the Brooklyn-Queens border, and the city Transportation Department outlined the plan before Community Board 5.

Senior project manager with the DOT Nichole Altmix said the agency was still working on safety upgrades for Myrtle and Wyckoff avenues near Palmetto Street in Ridgewood with hopes of simplifying the complexity of the intersection in accordance with the Vision Zero mission. Over a five-year period between 2008 and 2012, she said the intersection brought about 29 total injuries – 15 of which were pedestrian injuries and two fatalities.

“These numbers were very high for us,” she said at last Wednesday’s Community Board 5 meeting. “That’s why we started looking at this intersection.”

Some of the pending changes being considered included the installation of a new crosswalk, eliminating what Altmix described as “low-volume” turns and shortening the crossing distance for pedestrians. Because of the area’s complexity, the DOT project manager said there were several different facets to its proposal to be considered.

For years, Altmix said the city has fielded complaints about the intersection’s poor visibility at night, especially underneath the nearby elevated subway tracks and near its support columns. The DOT was considering installing new lighting underneath the subway to alleviate that problem, she said. Five painted curb extensions were another layer of the DOT proposal with hopes of shortening how far pedestrians have to walk while crossing.

The agency also proposed eliminating five turns at the intersection that Altmix said would minimize dangerous vehicle movement around the area without affecting any public transit operations.

“It’s a very complicated intersection,” she said. “There’s a lot going on.”

CB 5 member Paul Kerzner asked the DOT representatives why public transit buses were rendered unaffected by the traffic changes despite a Metropolitan Transportation Authority bus being responsible for the death of 2-year-old Ella Bandes there in April 2013. Queens Borough DOT Commissioner Dalila Hall said it would take much longer to establish a safety plan to reroute city buses and the current proposal was the best bet for short-term success.

CB 5 Chairman Vinny Arcuri said the board has revisited this same topic several times over the past decade, but Hall added it had a little bit more support this time around thanks to Mayor Bill de Blasio’s Vision Zero initiative, which set out to reduce traffic-related deaths to zero over 10 years.

The CB 5 transportation committee took the DOT’s latest presentation into its May meeting for further consideration before the project moves any further, Arcuri said.