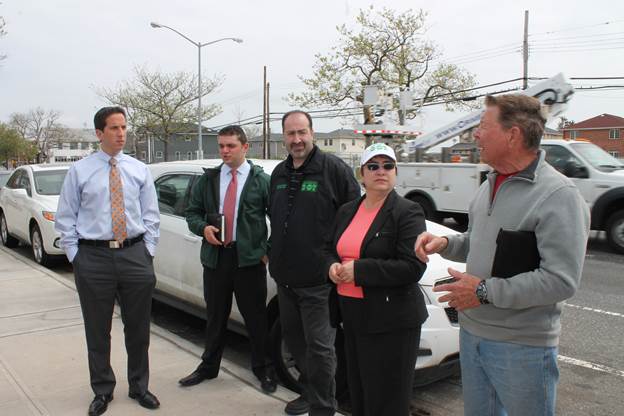 The road to recovery, South Queens residents know all too well, is a long one.

Nearly 19 months after Hurricane Sandy hit, the city on Monday began repairing streets and sidewalks destroyed, or damaged, during the storm that devastated the waterfront community.

“Our streets and sidewalks in Broad Channel have needed upgrades for years, and Sandy only made the situation worse,” Assemblyman Phil Goldfeder (D-Rockaway Park) said.

Goldfeder joined other area leaders last week to announce that the city Department of Design and Construction were mobilizing contractors to begin the much-needed work.

“I commend the Department of Transportation and DDC for listening to community concerns and ensuring our community makes a complete recovery after the storm,” Goldfeder said.

“This project is welcomed news, as our streets are in serious need of repair and the depressions are causing vibrations from traffic in the homes of our families along Cross Bay Boulevard,” Mundy said.

The road work, conducted under the umbrella of the city DOT, is being paid for through Sandy federal grant funding and includes street and sidewalk repair and repaving on Cross Bay Boulevard between 5th and 20th roads. According to the DDC, the scope of the work also includes new pedestrian ramps, curbs, and sidewalks.

“The project, which will include the side streets in a second phase, will help erase the damage caused by Hurricane Sandy, as well as address the deteriorating road conditions that have become intolerable for our community,” Mundy said.