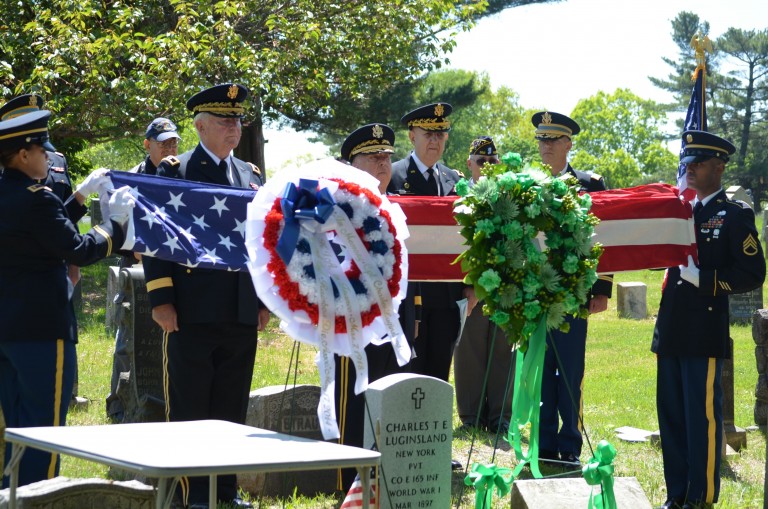 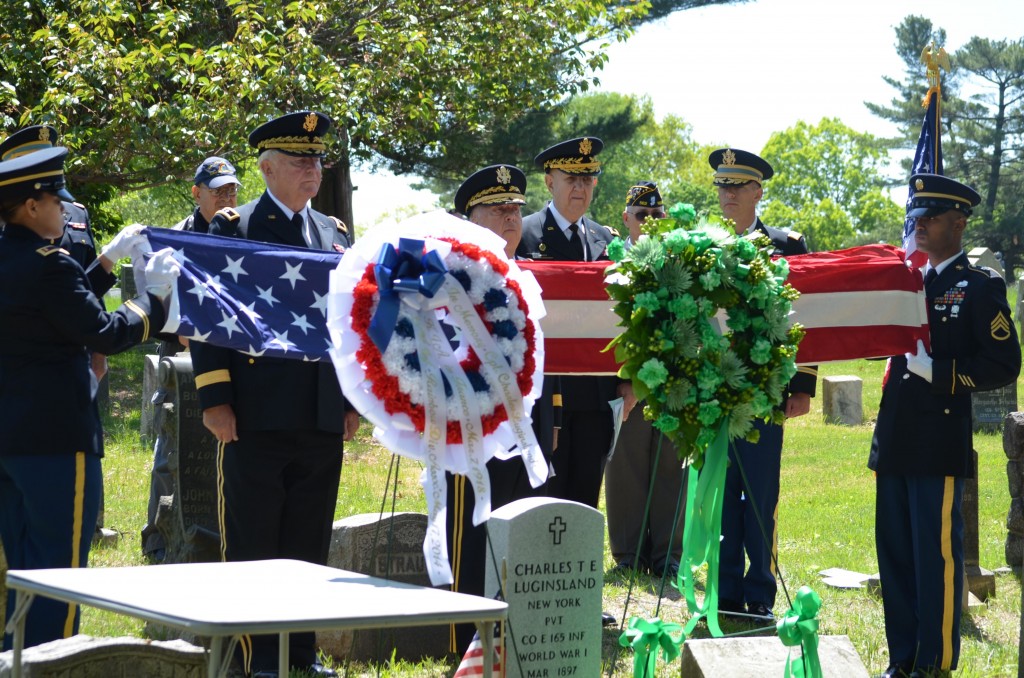 A military burial ceremony was held at the Evergreens Cemetery for Private Charles T. Luginsland, who was killed during World War I when the bunker he, and 21 others in his unit, was bombed on March 7, 1918. Originally buried in France, Private Luginsland had been moved to the Evergreens Cemetery, but his name was worn off his grave by the elements long ago. A new headstone has been placed for the man who died just four days short of his 21st birthday.
Photo by Caroline Roswell

The week leading into this Memorial Day weekend, the Cemetery of the Evergreens, with grounds spanning the border of Ridgewood and Brooklyn, added three new military headstones to the hundreds of military headstones that have been put there since its opening in 1849. The cemetery also hosted two military ceremonies, and stories of these stones and ceremonies I have been privileged to share with you.

“It was a Memorial Day over a century in the making.”  These are the words of Sean Walsh, who, after salvaging a 165 year old family bible from the trash of his grandparent’s home in Florida, was able to trace his family back to two of his third great-grandfathers, both of whom fought in the Civil War, both of whom were buried in The Cemetery of the Evergreens, and both of whom had no gravestone or marker. Just empty spaces among a sea of gravestones, that if it weren’t for cemetery worker and historian Danny Daddario, Walsh and his father might not have ever found. With the help of Anthony Salamone, himself a Vietnam Veteran, and who also works at “The Evergreens,” Walsh, who resides in Massachusetts, was able to have two military headstones erected for each of his third great-grandfathers this past Friday, in time for Memorial Day weekend. 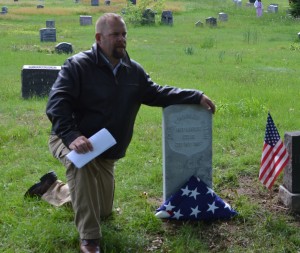 Sean Walsh, a former U.S. Marine, kneels by a new military headstone that was placed in the Evergreens Cemetery for his third great-grandfather, Lt. John Charles Walsh, who fought in the Union Army during the Civil War. Photo by Caroline Roswell

Sean Walsh, a former U.S. Marine, award-winning journalist, and high school English Teacher, after five years of research found that in early 1861, Lt. John Charles Walsh enlisted in the Union Army in Lockport, NY as a private for a two-year term, and subsequently received two battlefield promotions to second lieutenant and then to first lieutenant as an officer in the New York 28th Infantry, otherwise known then as the “Albany Rifles.” His second promotion came after capturing an entire company of Confederates at a battle at Columbia Furnace, Virginia. He also fought at the Battle of Antietam. Eventually, Walsh was discharged in March 1863 and he made his way to Manhattan. Sean Walsh could not help feeling proud as he shared, “and now, 133 years after he was buried in an unmarked grave in the Pleasant Hill section of The Evergreens Cemetery, Lt. John Charles Walsh (1834-1881) of the New York 28th Infantry, has finally been recognized for his service to his country.”

But this story doesn’t end there. Daddario also helped Walsh find the grave of his other third great-grandfather, Charles Louis Haniquet (1845-1910), whose service was slightly more difficult to pinpoint for Walsh.

“The Haniquet name – which is French – has been so butchered and misspelled over the last century and a half that finding even the simplest documents using the most available resources seemed impossible,” Walsh said. “But when I found it, it was a goldmine.”

What Walsh discovered about Charles L. Haniquet was that he enlisted in the Union Army a few weeks before the infamous Draft Riots of 1863 that nearly decimated Manhattan, and that he was one of the soldiers who was thrust into action to fight against his own fellow New Yorkers. Private Haniquet eventually received a full pension for his service and worked for 20 years for the City of New York.

“But when he died in 1910, and was buried in the Mount Hemron section of The Evergreens,” Walsh said, “again, no stone.”

This past Saturday, Walsh gathered with his family members at each of his ancestors’ grave sites, with cousins he had only met that morning, who shared one of those great- 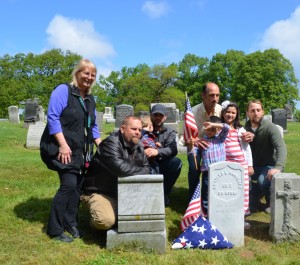 Sean Walsh and his family with the headstone of Pvt. Charles Louis Haniquet , Walsh’s third great-grandfather. Photo by Caroline Roswell

great-great grandfathers with him, to finally see the military headstones his ancestors long went without.  Amazingly enough, he found those long lost cousins on Facebook, and it was a family reunion more than a century in the making. But if that isn’t amazing enough, Walsh has found through searching his past that he is also a descendant of both George Washington and Abraham Lincoln – hard to believe, but if you don’t believe me, he is writing a book, due out sometime next year.

With family genealogy becoming more and more popular, most likely due to the accessibility and availability of records on the internet, Daddario and Salamone, along with the other staff at “The Evergreens” are busy as ever, helping people find their ancestors. Anthony Salamone helps families and others find sometimes long lost graves of veterans and then walks them through the process with the Veterans Association of getting a military headstone for them.

But here is another fascinating Memorial Day story that is nearly a century in the making. On Saturday, May 17, 2014, a World War I soldier that was killed in France in 1918, in a place with a name as poetic as its tragic story, the Rouge Bouquet woods. That soldier was finally given the military burial ceremony and headstone he had earned, at his 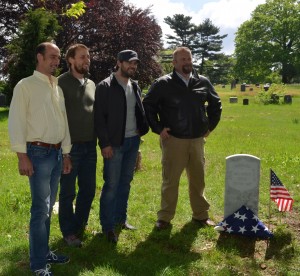 family grave site in the Pleasant Hill section of the Evergreens Cemetery. But this military ceremony was unique, in that a poem had been written about the night that soldier was killed, and that poem was read aloud for all those who gathered to pay their respects for that young soldier.

Found by his great niece, Diane Lowe, along with others in the family, long believed that their great uncle, Private Charles T. Luginsland, was still buried in France.  Private Luginsland was in fact buried in France right after he was killed on March 7, 1918, when the bunker he, and 21 others in his unit were in, was bombed.  Only five bodies were recovered, Luginsland being one of them, and only two had survived. The other 15 who succumbed after being buried under the collapsed bunker had to remain entombed there, only after valiant efforts were made to recover them while still under attack. According to the timeline provided me by Lowe, “The Regimental Chaplain, Fr. Francis P. Duffy, said a prayer over the dead. Afterward, the famous poet, Joyce Kilmer, who was a member of the Regiment wrote a poem entitled “Rouge Bouquet” in honor of those

brave men lost that night. The first chance Father Duffy had after the shelling, the Regiment was in a little clearing surrounded by pine trees in the woods near Croixmare, about four miles from the front. There they buried those few men they had been able to excavate from the blasted dugout. The 165th infantry lost 26 dead during its 10 days in the front lines of the quiet sector.  After conducting a regular service, Father Duffy recited Joyce Kilmer’s “Rouge Bouquet” to the accompaniment of taps on the bugle.” 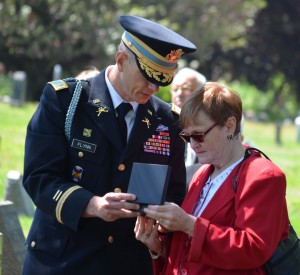 It was only through Lowe’s research did she find out that, “Charles died just four days short of his 21st birthday, and two years after his death my great-grandfather sent a letter to the War Department demanding that his son be brought back “home” here to America to be near his mother. He has been lying here in The Evergreens for decades, his name long erased by the elements from the original family gravestone.”  Lowe remembers, “since I was a child my father told the story of his Uncle Charlie and we would watch the movie ‘The Fighting 69th’ every time is was shown on TV.  Maybe that is why I developed such a strong interest in my family history”.  Private Luginsland’s was part of the famous New York Fighting 69th but in August of 1917, the 69th New York Infantry was then re-designated 165th Infantry Regiment, 83rd Brigade, 42nd Division.

For Lowe, “keeping his name and memory alive became a personal quest. So, as you can see this military stone bearing his name will remind those in passing that he is an American hero”.

Although there are thousands of military men and women buried in “The Evergreens,” from every war our nation has ever fought in, many have not been given the honor of having a military headstone, and many more have no headstone or marker at all, as in the case of all service men and women not buried in a National Military Cemetery. The responsibility for someone, military or not, having a headstone, falls on the family of the deceased.  So, the reasons people are buried without headstones are as numerous as each person’s circumstances. But what’s even more dishonorable is the fact that thousands of soldiers who served our country, and have even given their lives doing so, have been buried in potter’s fields as a result of their circumstances at their time of death.  It is these soldiers, who have even less of a chance of ever being memorialized or remembered with a headstone.  What’s worse is that many of our cities parks and other public works spaces were built on potter’s fields, a fact I find to be deplorable, that men who died for our country are buried under public ground, with not so much as a marker, and will remain anonymous in death, as they perhaps were in life, for all of time.