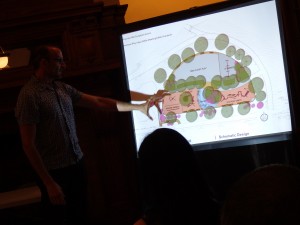 The city Parks Department plans to break ground on a new playground in Forest Park in about one year, officials said.

Parks put the designs for Mary Whalen Playground on display for the first time to the community Tuesday night inside Oak Ridge, which overlooks the playground by Park Lane South and 79th Street. The renovation plans came years after City Councilwoman Elizabeth Crowley (D-Maspeth) worked to set nearly $1 million aside so the park could reinvent itself.

“I believe it’s a beautiful rendering,” Crowley said. “It’ll fit right in and be quite pleasant. All around, it is a great community improvement.”

Designer Ricardo Hinkle first showed his renderings to the councilwoman last month before presenting them Tuesday night. He outlined some of the biggest aspects of the renovations, which included a new handicap-ready access ramp, a new exterior fence, more plant life and designated areas suitable for different youth age groups.

Hinkle said he planned on having the park’s tree canopy increased 200 percent, bringing much more shade to people passing through the park. He also planned on growing the plant beds there by 150 percent. The big numbers drove home the point that Mary Whalen’s park would be getting a makeover both visually and with its infrastructure.

“We are trying to keep what we can and replace what we have to,” Hinkle said. 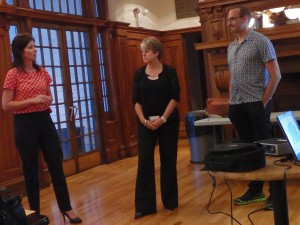 Designer Ricardo Hinkle said some of the highlights of the upcoming renovation of Mary Whalen playground include designated areas suitable for different age groups and more plant life. Photo by Phil Corso

Some members of the community floated questions concerning safety and certain park amenities like a public restroom, which the park currently does not have. Crowley and the Parks Department shot back saying the current plans were only a first step with plenty of room for improvement in the future.

Crowley said she wanted to get the initial plans set into motion first so the community could have a conversation throughout the summer before the next phase. There should be about another month for drawing critiques, six months to put the project out for bid so ground could be broken about one year from now, she said. If all goes well, she said, it should be finished in two years.

“Let this be a first step,” Crowley reassured the crowd. “Then if it’s not enough, we can move forward. Let’s make sure this goes down the path of being built first.”

Maryann Keller was the daughter of Mary Whalen, the late Woodhaven activist who had the park dedicated to her after she died in 1987. She sat quietly at the meeting, listening to the proposals and nodding along with approval as each renovation was suggested.

Keller said the playground has always been a hotspot for children throughout the Queens community, including her own children. There was no better way to honor her mother’s legacy, she said, than to keep the park top-notch.

“She loved Woodhaven,” she said of her mother, a former member of the community board among several other activist roles. “She was a force to be reckoned with. She did a lot for this community and I’m very happy this is happening.”

Born in Brooklyn in 1917, Mary Whalen attended John Adams High School before going on to participate in such community groups as the Woodhaven Women’s Democratic Club, the Woodhaven Senior Center, the Ladies Auxiliary of the American Legion Post 118, the Catholic Veterans Group, and the Supreme Council of the Columbiettes. At a time when the Kiwanis club only allowed male membership, Whalen was an invited guest and often attended meetings with her husband, Peter Whalen.

Living just one block from the playground, she frequently spearheaded cleanups and spent time at the green space with her four children and six grandchildren.