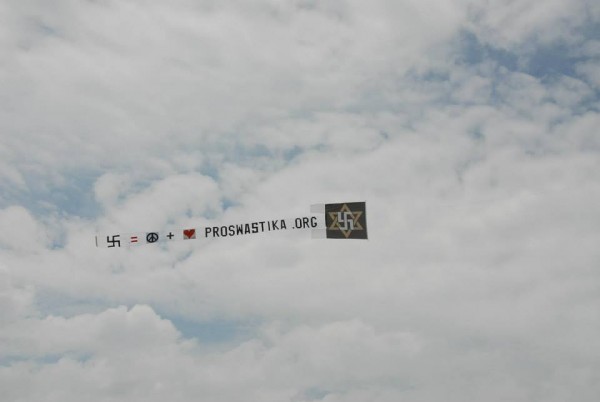 Rockaway beach bums were slapped with a controversial sky advertisement over the weekend and one southern Queens lawmaker said he has seen enough.

Reports of an airplane sporting a pro-swastika flag over the Rockaways sent Queens residents into confusion as to why the sensitive symbol was up in the sky. State Assemblyman Phil Goldfeder (D-Rockaway Park) took that opportunity to call on the city Department of Consumer Affairs to up its efforts in combatting inappropriate signage.

“I have two young children at home and I do everything I can to protect them from vulgar and inappropriate material,” said Goldfeder, a Rockaway resident. “I strongly urge the NYC Department of Consumer Affairs to make every effort to monitor the content of advertisements and ensure companies and organizations do not choose a location in our neighborhoods that is inappropriate for their products and message.”

One of the controversial ads that ultimately lit the spark for Goldfeder came over the weekend when a swastika was flown over the Rockaways in accordance with International Swastika Rehabilitation Week, which ran from July 5 to July 12.

One group, the International Raelian Movement, wrote on its website proswastika.org that swastika rehabilitation efforts were established to reinvent the symbol from its currently accepted one of anti-Semitism, hate and intolerance.

The group’s offshoot known as the ProSwastika Alliance spent the weekend flying banners over beaches adjacent to New York City, Miami and other locations throughout the United States.

The group defends its usage of the controversial symbol on its website, relating back to its origins as a symbol of good luck and well being, proswastika.org said. The alliance’s website also argued that swastikas should not be associated with Nazi Germany because it was already in use long before the group gained power and notoriety.

“We decided we need an entire week to really get the word out,” said Raelian Guide Thomas Kaenzig. “How can the world be reeducated about the truth of this symbol if we can’t get the word out to show people?”

Goldfeder said that even though the First Amendment guarantees the right to free speech, it should not be exercised without limitations.

“We need to find the balance to allow our families to enjoy their neighborhoods while keeping the vulgar and offensive content of ads in check,” Goldfeder said. “We have that responsibility to our community and our children.”

Last year, the assemblyman fired off a letter to the city Department of Consumer Affairs when he heard a banner for SKEnergy Drink sporting a scantily clad woman was shown over Rockaway beaches during little league softball games.  The lawmaker used that opportunity to call on the city to step up its work in reforming its advertisement enforcement.