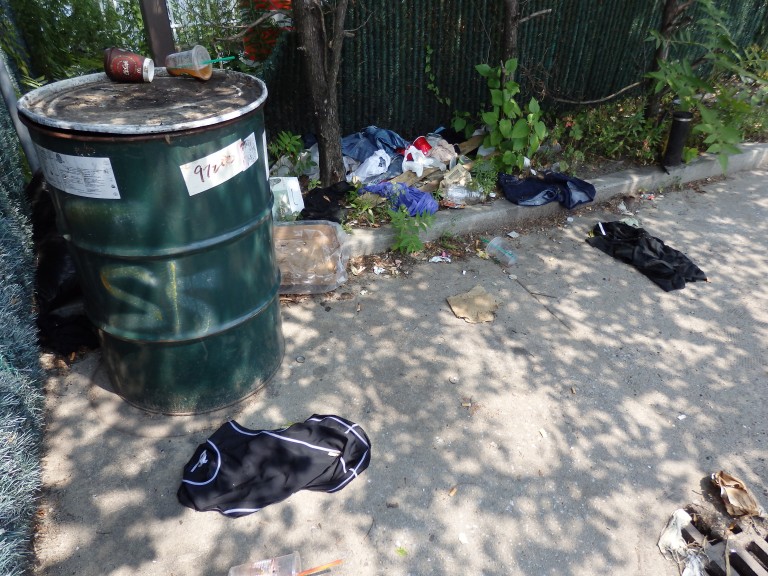 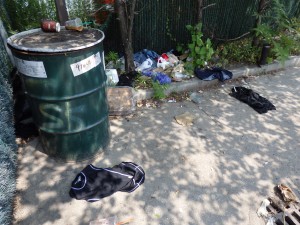 Trash lines the pavement outside the Starbucks in Howard Beach. Photo by Phil Corso

Community advocates are calling out the city to clean up its act.

Public eyesores including graffiti, litter and other junk have become a consistent burden across civic groups and elected officials perusing the streets of neighborhoods like Howard Beach and Woodhaven and officials there picked up the pace this week. Lawmakers from both the city and state came out in support of new initiatives to help make borough streets shine.

In Howard Beach, state Assemblyman Phil Goldfeder (D-Rockaway Park) singled out the owners of a vacant property on Cross Bay Boulevard for allowing part of their space to spiral down into a state of disarray. The assemblyman singled out a pile of garbage behind the Starbucks on the boulevard where piles of garbage overwhelmed the greenery and parking lot.

The property there used to be rented by “The Sausage King,” Goldfeder said, but has since been listed for sale by Howard Beach Realty, which did not comment on the litter. Goldfeder said he penned a letter to the realtors in regards to the eyesore and urged them to take whatever steps necessary to prevent anymore dumping there.

“Our families deserve to live in a community where they can comfortably enjoy the summer weather outdoors without being surrounded by unsightly garbage,” he said. “I strongly urge owners of the vacant lot to be a good neighbor and clean the property.”

Joann Ariola, president of the Howard Beach Lindenwood Civic Association, said her group has always been an advocate for cleaner streets in the community and commended the southern Queens lawmaker for stepping up to plate in the summer months.

“The Howard Beach Lindenwood Civic has made a commitment to cleaning up local eyesores,” she said. “We appreciate Assemblyman Goldfeder for being a true partner and tackling the more offense quality-of-life issues that face our community every day.”

In Woodhaven, complaints of graffiti and unsightly pieces of property quickly became dominating points of discussion over recent months. Ed Wendell, former head of the Woodhaven Residents Block Association, said graffiti issues in particular were on the rise.

Lawmakers are taking a closer look at graffiti and other eyesores as the summer months put them on full display. Photo by Phil Corso

“We definitely have a big problem with graffiti in this community. We get a lot of complaints about it,” he said. “We see it getting out of hand again and we want to encourage people to start reporting it.”

Those pleas were partially answered last week when City Councilman Eric Ulrich (R-Ozone Park) announced his securing of funding to help revitalize parts of Woodhaven, including Jamaica Avenue, with a graffiti removal program and other amenities.

In the coming months, Ulrich said the Queens Economic Development Corporation would be working to revitalize an anti-graffiti initiative the residents of Woodhaven once enjoyed before it slowly faded away over the last year. The councilman also said he secured money to bring new street lights along Jamaica Avenue and also install new high-end litter baskets for the area.

The anti-graffiti program, Ulrich said, should kick off in the next month.

“This will be a very robust, aggressive quality-of-life program that we are going to kick off here,” Ulrich said. “In the last year and a half, I have been very disappointed in the program. That’s why I helped secure this money and put it in a better place.”