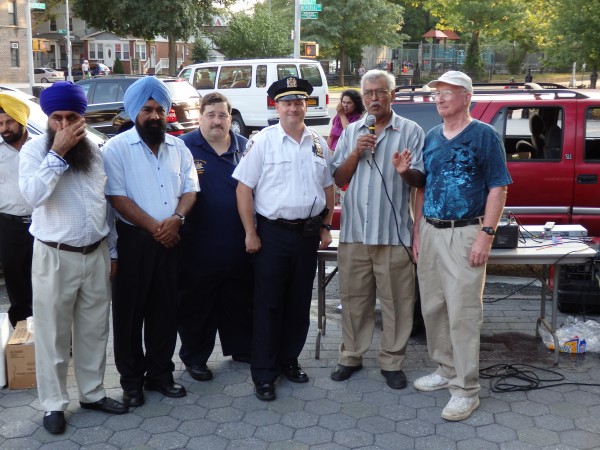 Members of the 102nd Precinct Community Council join with Deputy Inspector Henry Sautner for the National Night Out festivities.
Photo by Phil Corso.

There were parties all over the city Tuesday night and southern Queens came out in big numbers to support the police precincts that patrol the region. 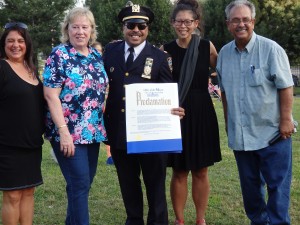 The city Police Department hosted its annual National Night Out Against Crime this week with well-attended festivities planned in countless precincts throughout all five boroughs. Central and southern Queens precincts, including the 102nd, 104th, 106th and 112th, were no exception.

The 102nd Precinct, which oversees communities like Kew Gardens, Richmond Hill and Woodhaven, kicked off its annual event at the Buddy Memorial Monument, located at Park Lane South and Myrtle Avenue around 6 p.m. Tuesday night. Elected officials made their rounds and shook hands with precinct leaders and Community Council members while enjoying free food and music.

“The important thing is to see a lot of positive energy in the community,” said Maksud Khan, a resident who lives minutes away from the Buddy Memorial Monument in southern Queens. “Everybody here is smiling.”

“When the deputy inspector is here, everything is good,” Budhai said of Sautner. “He does a great job for our community.”

The 104th Precinct, which serves central Queens communities like Glendale, Maspeth, Middle Village and Ridgewood, hosted its event at Mafera Park and offered plenty of attractions for children. There was even a water slide, regular slide, bounce houses, balloon animals and a dunk tank.

The central Queens 104th Precinct offers up plenty of fun for the whole family with inflatable rides serving as only one attraction at its National Night Out Against Crime on Tuesday. Photo by Michael Florio

The precinct supplied free hot dogs and hamburgers to all in attendance as well as a DJ and dancing. The Ridgewood YMCA, located at 69-02 64th Street, provided free aerobics, led by one of their instructors, for all those willing to participate.

“Tonight is about everyone getting an opportunity to meet the police officers,” said Mario Matos, President of the 104’s Community Council. “They get to learn what is going on in the precinct, share their stories and more importantly learn how to stay safe.”

The 106th Precinct of Howard Beach and other southern Queens communities kicked off its own event at Police officer Edward Byrne Park, located at the intersection of North Conduit Avenue and 134th Street in South Ozone Park Tuesday evening. There, Deputy Inspector Jeffrey Schiff shook hands with residents and elected officials while doling out awards to members of the community.

Vincent Vella also received a community service award for his decades of activism and involvement in the Howard Beach and Ozone Park communities, the 106th Precinct said.

The 112th Precinct, which serves Forest Hills and its surrounding central Queens communities, was said to have had one of the biggest turnouts throughout the entire borough, Borough President Melinda Katz said. There, elected officials took up the daunting tasks of easing community tension after last month’s tragic death of Staten Island resident Eric Garner during a controversial arrest. 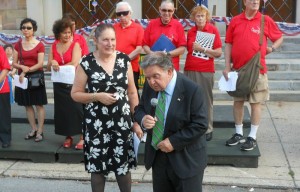 Executive Assistant District Attorney Jesse J. Sligh. Sligh vocalized the importance of cooperation between the community and NYPD to ease any angst created by Garner’s death.

“Every little thing that people do in partnership with each other helps to ease tension and build bridges,” Sligh said. “No matter how small it is every little thing we do together is important.”

Koslowitz also spoke of Garner’s death, but took a more critical stance against the officers involved.

“Eric Garner was a tragic thing that happened,” said Koslowitz. “I think we need to have a little more caring for people and people’s lives. They were a little too rough.”

But despite any misfortune the Garner family has been afflicted with, Koslowitz said she believes the Night Out rallies are put in place to remedy any strained relationships between police and the neighborhoods they preside over.

National Night Out Against Crime started in 1984 by the non-profit organization National Association of Town Watch, in an effort to promote crime prevention, neighborhood camaraderie and police-community partnerships. Precincts all over the country participate and gather the first Tuesday in August.

Michael Florio and Joseph Randazzo contributed to this report.