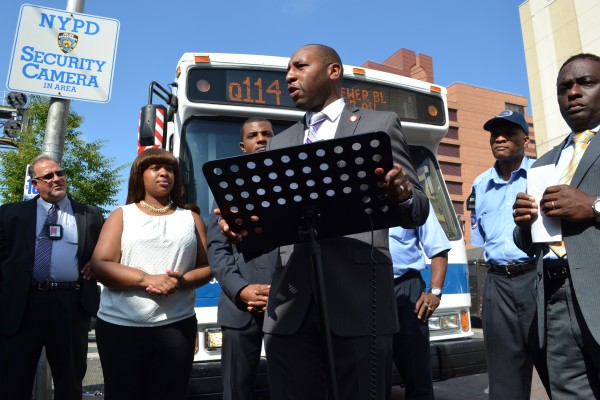 City Councilman Donovan Richards, at podium, joined the MTA and commuters in Jamaica in welcoming the Q114 to Jamaica
Photo Courtesy of Councilman Richards’ office

South Queens straphangers last week swiped their MetroCards for the first time aboard the new Q114 bus, but the route might seem familiar to those who have become accustomed to the Q113.

The Q114 Limited is part of the Metropolitan Transportation Authority’s 2014 bus service improvements, which implemented $4.9 million in enhancements to routes in all five boroughs. These enhancements, according to MTA New York City Transit, include new routes, extensions and stops.

“New York City changes all the time, and we must keep up by making accommodations and adding service when the need arises,” said NYCT President Carmen Bianco.

In Queens, the Q114 is “basically the same route as the old 113; but it’s limited, not local,” said an MTA spokeswoman.  It has 50 stops along its route, down from the 77 stops the original Q113 made between Jamaica and Far Rockaway. The restructured run aims to provide faster service to customers traveling a long distance along Guy R. Brewer Boulevard in South Jamaica and Rochdale Village. The new Q114 route will make limited stops on the boulevard, then all local stops along Brookville Boulevard and through Woodmere, Cedarhurst, Inwood, Lawrence and Far Rockaway. During overnight hours, it will make all local stops along Guy R. Brewer Boulevard. The Q113 will continue its limited-stop service from Jamaica through Far Rockaway, and the Q111 will continue to make all local stops from Jamaica through Rosedale.

City Councilman Donovan Richards, who helped unveil the new line last Friday, noted how the Q114 will begin to address the mass transit needs of his constituents.

“Historically, the neighborhoods of Southeast Queens and the Rockaways have lacked access to reliable public transportation,” Richards said. “I applaud the MTA’s effort to listen to the needs of commuters and respond accordingly through the creation of an alternative bus route. I look forward to continuing to work with the MTA to provide dependable and most importantly, efficient mass transit alternatives for residents.”