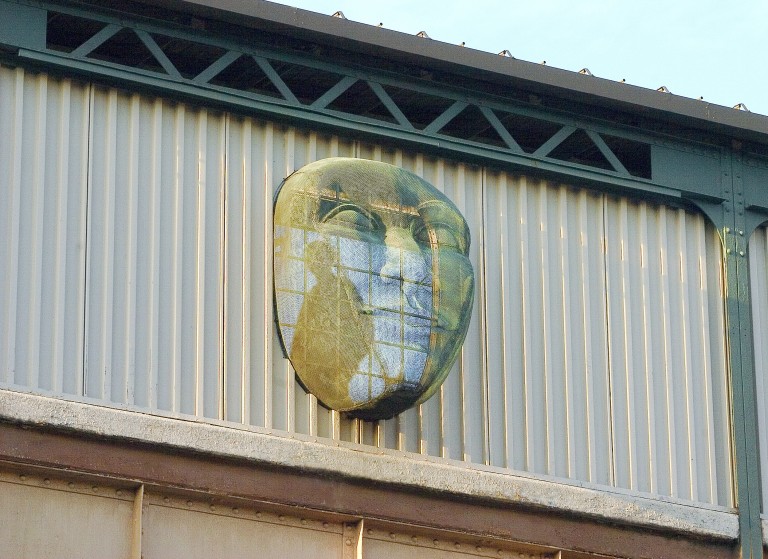 ‘Be Good or Be Gone’ by Duke Riley at the Beach 98th Street station. Photo Courtesy MTA/Rob Wilson

The next time you find yourself at the intersection of Woodhaven Boulevard and Jamaica Avenue, take a quick look around. You might catch a driver or bus passenger or pedestrian heading north on the boulevard craning their neck toward the elevated subway station and that mysterious face that has stood sentinel over the roadway for more than 20 years.

And thanks to a new book that features the 250 permanent works of art throughout the city’s vast transportation network, curious commuters can relax their necks while they read up on the details behind Kathleen McCarthy’s “Five Points of Observation.”

The Metropolitan Transportation Authority last week announced that “New York’s Underground Art Museum,” by Sandra Bloodworth and William Ayers, will be available Oct. 28 wherever books are sold. The tome, an updated companion to “Along the Way” (2006) by the same authors, boasts 300 images over 264 full-color pages, and a foreword by actor and New York native Stanley Tucci.

The new edition, presenting new artworks created by such artists as Xenobia Bailey, James Carpenter, Ellen Harvey, Sol LeWitt, Jason Middlebrook, Odili Donald Odita, Duke Riley, Holly Sears, Jean Shin, Alyson Shotz, Shinique Smith, Doug and Mike Starn, and Allan and Ellen Wexler, includes information about nearly 100 works of art that have been installed over the past eight years. Additionally, “…Underground Art Museum” features works of art that have been commissioned but not yet installed, including those that will be unveiled in the new stations of the Second Avenue Subway, at Fulton Center and the extension of the 7 line.

“Traveling from home to work, and back again, day after day is a necessity,” Tucci writes in the book’s foreword. “To do so in an environment that incorporates art can make the usual unusual, the ordinary—more than that—the boring, stimulating, and what is ugly … maybe beautiful.”

According to MTA Arts & Design, the arts program was begun in the mid-1980s to invite customers back into what was then viewed as a decaying subway system, and to provide a sense of security and warmth, and to enliven and beautify stations. As part of the nationwide “percent for art” movement, the MTA sets aside one percent of the capital budget to create and install artwork when stations are renovated or facilities are built. The agency indicated that much of the focus over the past eight years has been in the subway stations in the outer boroughs of the city.