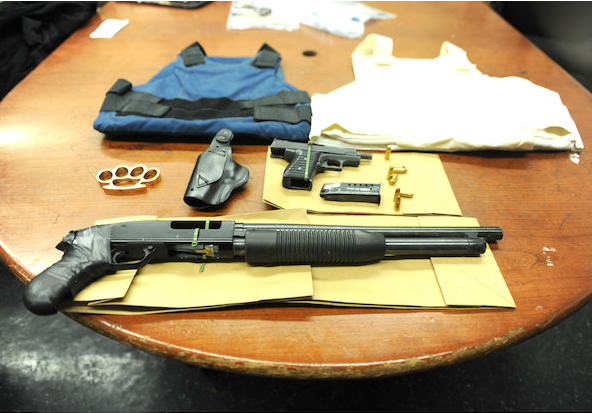 A Glendale man this week remained on Rikers Island on $500,000 bail following his Christmas Day arraignment on multiple counts of criminal possession of a weapon, aggravated harassment and other charges after he was allegedly overheard telling someone that he was going to kill police officers and a cache of guns, ammunition and bulletproof vests were found in his home, according to Queens District Attorney Richard Brown.

Elvin Payamps, 38, of Edsall Avenue, was overheard talking on a cell phone reportedly in the Middle Village branch of a TD Bank on Christmas Eve when, according to the complaint, a witness heard him say that he was going to kill another cop; that it should happen before Christmas; and that last weekend’s shooting should have killed white officers.

According to the charges, during a search of Payamps’ home police recovered brass knuckles, a loaded black Jimenez Arms JA 9mm pistol, a black Mossberg Maverick Model 88 12-gauge shotgun with a defaced serial number, ammunition and two bulletproof vests. One of the vests was labeled as being from the Brooklyn Detention Complex.

Following his arrest, Payamps allegedly admitted to saying that the two officers shot and killed in Brooklyn last weekend—Detectives Rafael Ramos and Wenjian Liu—should have been white instead of Hispanic and Asian, if the shooter wanted to send a message.

Payamps, who as of Monday evening was listed as being housed in the North Infirmary Command on Rikers Island, faces up to 15 years in prison if convicted.