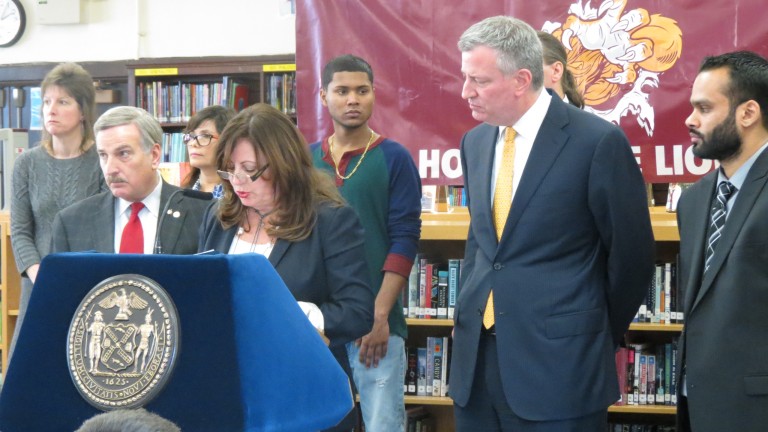 Mayor Bill de Blasio last Thursday paid a visit to Richmond Hill High School, touting its improvement over the past three months as one of nearly 100 Renewal Schools across the city.

“As a mom, as a teacher, as a principal, and as a superintendent, I understand the urgency and importance of this work at Richmond Hill and Renewal Schools around the city,” Horowitz said. “Our students deserve no less. I know as a city we can do this, and we will do this.”

“There have been challenges, but with the support and resources we’re receiving through the Renewal program, Richmond Hill is getting back on the right track,” said Neil Ganesh, principal of RHHS. “We’re extending learning time, motivating students through the ‘Are You Green?’ initiative, engaging parents and families, and—because the city has believed and invested in us—we have saved our arts program. There’s so much more hard work ahead of us, but the Richmond Hill Lions are roaring again.”

And at RHHS, the Renewal program has meant: expanded afterschool programs and Saturday sessions help struggling students catch up, with enrollment in afterschool nearly tripling from 143 to 413 students; the “Are You Green?” initiative tracks every student’s progress towards graduation—including credits, attendance and exams passed, so whenever a student falls behind, it triggers a collaborative response with teachers and parents to help them catch up and get back on track; an arts program slated to be cut was preserved with new funding; added more training in writing for 9th grade teachers; and teacher teams meet daily to combine efforts on individual students who may struggle across multiple subjects and areas.

De Blasio characterized the program as a stark contrast to how past administrations dealt with struggling schools.

“The history of this city is not a pretty one; the status quo we have received is unacceptable,” he said. “This is a different approach—it’s not yesterday’s approach. This is student-by-student. It really comes down to incessant focus on each student. It’s much more urgent, more hands on.”