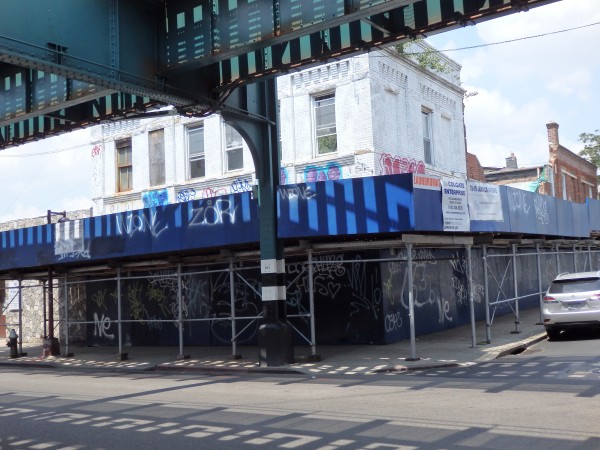 Photo: Graffiti has been an issue since scaffolding was installed at this site on Jamaica Avenue two years ago. File Photo.

While it seems that borough vandals may have a found a favorite corner canvas on Jamaica Avenue, one Woodhaven civic group has vowed to make sure that their urban installations don’t last long.

The Woodhaven Residents’ Block Association last week highlighted the blight at 78-19 Jamaica Ave.—“an eyesore for almost two years”—where construction fencing has constantly been saturated with spray paint and markers for the past two years.

Earlier this month, the organization even took matters into its own hands.

“We were sick and tired of seeing the construction site walls of the collapsed building covered in graffiti—so a group of residents took some rollers and paint and covered it up,” they said in an email.

“We know this is an easy target for punks to tag on again, as the lighting on the scaffolding is never on,” added Martin Colberg, president of the WRBA. “[Department of Buildings] and the owner of the building have done nothing to fix the lighting issue, but we will go back when needed to clean up the site.”

In other graffiti news, City Councilman Eric Ulrich (R-Ozone Park) on Monday announced today that his office allocated an additional $10,000 in expense funding for Fiscal Year 2015 for the Queens Economic Development Corporation to bolster graffiti removal throughout the 32nd Council District. Ulrich’s office has allocated a combined $35,000 for FY2015 to support the program.

“This allocation will strengthen efforts to remove graffiti from our neighborhoods and revitalize local small businesses corridors,” Ulrich said.

“This is a big quality of life issue that can make the neighborhood look horrible,” Colberg said. “If not for the efforts of the residents of Woodhaven, and the council member’s graffiti cleanup funding, you would see a much different Woodhaven.”