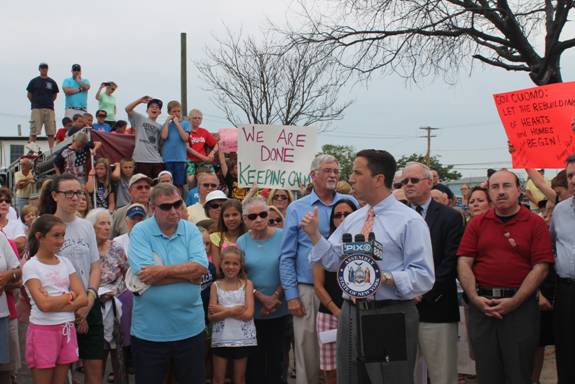 More than two years after Sandy and with many families still struggling to rebuild their homes, Assemblyman Phil Goldfeder (D – Rockaway Beach) has introduced legislation extending a waiver of city law requiring construction plans be approved by the city’s Board of Standards and Appeals.

In 2013, Goldfeder introduced the bill creating a waiver of BSA approval requirements in response to the hundreds of Breezy Point families facing delays in rebuilding their homes after Superstorm Sandy. That July, local residents, community leaders, and elected officials rallied to urge Governor Cuomo to sign the bill into law, leading to the Governor signing the bill that same day. Goldfeder secured an additional one- year extension to the provision in 2014; however, that extension is set to expire in July of 2015.

“Two years after Sandy, so many families in Breezy Point are still not back in their homes,” said Goldfeder. “The last thing they need as they struggle to recover is to be held up by the bureaucracy of the city’s permitting process. By extending this waiver, our families can rest assured that this unnecessary red tape will not keep them from rebuilding.”

Under the proposal, the city’s Department of Buildings would be allowed to continue to sign off on certain Superstorm Sandy rebuilding without the property owner needing to first obtain approval from the BSA, a process that can take up to a year to complete; ordinarily, the unique size and shape of property lots in Breezy Point requires BSA approval before beginning such projects.The waiver’s extension could also expedite the pace of rebuilds under the city’s Build it Back program. This comes as a great relief to the beachfront cooperative, which saw 135 homes destroyed by fire and hundreds more devastated by flooding during Sandy.

“I will continue to fight and extend this waiver until every last family is back in their home and our community has been rebuilt stronger than ever,” said Goldfeder.