Photo: Two boats, still tethered, have begun to sink in Hawtree Creek. Though the fuel of the larger boat has been pumped out, area residents are calling the situation an “eyesore” and a potential hazard to navigation and the environment. The boats’ owner, whose residence from outside appearances is also in disarray, is unreachable and said to be incarcerated. Forum Photo by Theresa Crupi.

Hawtree Creek in Howard Beach and Hamilton Beach has been home lately to a couple of sinking boats, and, after efforts to reach their owner failed, locals called in the big dogs.

The Coast Guard, Army Corps of Engineers, police, fire department, politicians, environmentalists, and various other officials have been notified of the situation.  According to Alan Aldrus, Recording Secretary of the Howard Beach Motor Boat Club, those contacted did move swiftly to try to address the situation, but then, as bureaucratic processes hindered further action, and identification numbers couldn’t be retrieved from the sunken vessels, the boats have been left to drift and bob, tethered weakly to the owner’s docks.  They’ve been this way since thick winter ice melted on the creek in mid-March. Aldrus believes that additional ties to the dock were added in the last week or two, and that the boats have become more submerged.

The Army Corps of Engineers, responding to requests for information from Assemblyman Phil Goldfeder’s office, sent a team to make an assessment of the larger boat.

“The vessel is secured and is not presenting a hazard to navigation.  Because of this, we do not have the authority to either request funds for removal or use our own floating crane boats to effect the removal,” wrote Deputy Chief of Operations John Tavolaro in an email. “Also, our crane boats can’t fit in that particular waterway due to a low clearance event.”

Aldrus said he didn’t believe that the Army Corps can’t get in.  And, as he puts it, “The boats are on the edge of the channel and they pose a hazard to navigation.  Another storm comes out, and they may move and block it completely.  It’s just not right.”

The larger of the two recreational vessels, a 50’ yacht with a fuel tank of approximately 500 gallons, was allegedly pumped of its gas, but Aldrus says that’s not all that’s left to do. Citing visible oil slicks that were earlier present on the canal, he affirmed, “It’s an eyesore, and nobody has assured us that the toxic chemicals on board have been fully removed.” 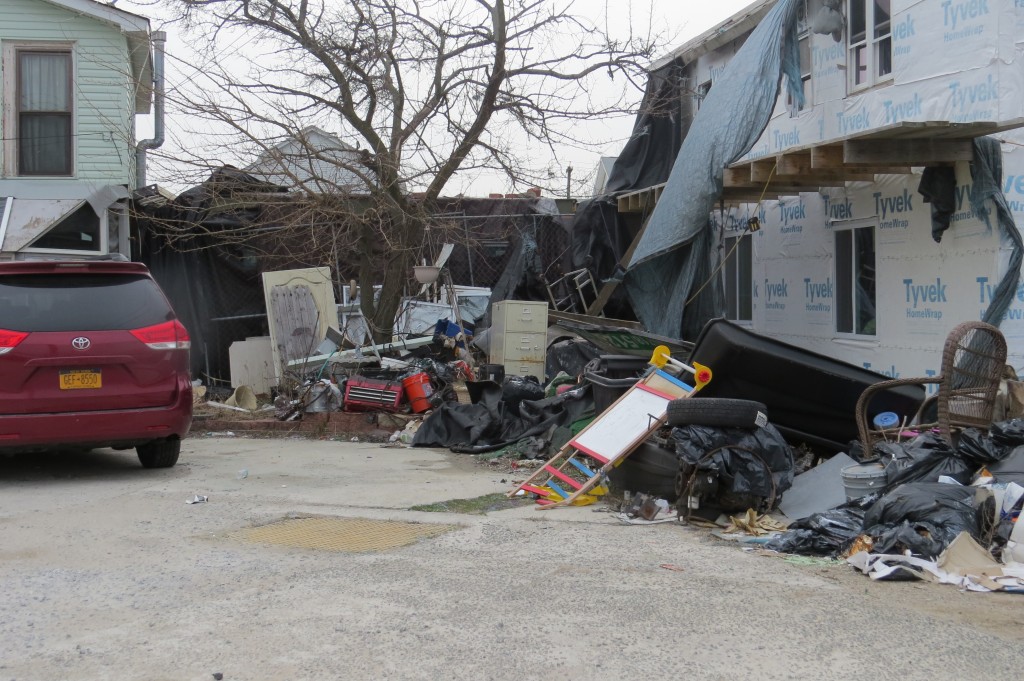 The boats are allegedly owned by the owner of this dilapidated, refuse-ridden residence in Hamilton Beach, a man who past is riddled with building code violations. Senator Joe Addabbo cautions that neglected properties can draw a variety of vermin and cause further damage to homes already in disrepair. Forum Photo by Patricia Adams.

Speaking of eyesores, one of the boats is tethered to a dock at One Bayview Avenue, a dilapidated residence overwhelmed by piles of debris and trash whose owner is believed to be Kris Gounden.  Gounden’s current whereabouts are unknown, though a New York Daily News article reported last year that property he owned in Brooklyn was in such disrepair that, following a slew of complaints from his tenants, he received fines of $382,000 – and a jail sentence.

“Enough time has elapsed for the owner of the boats to come forward.  Even if he’s in jail, there are people living there who could take care of this.  The bottom line is that the boats need to be out now.  It’s not good for our community, aesthetically or environmentally,” said State Senator Joe Addabbo, whose constituents reported that residents of the home in ruin at One Bayview had moved to the boat when the house became unlivable.

Gounden, who is Guyanese, might also be remembered locally for his accusations in 2007 that NYPD in the 106th precinct had racially profiled him when they served him with summons and visited his Hamilton Beach home nine times in one year.  According to a Daily News article, the Buildings Department had received numerous complaints on One Bayview, resulting in fines totaling $10,500.  At the time, then-Councilman Addabbo said Gounden was trying to get around the building code.

“I encourage everyone to maintain their property, and if it’s not maintained, mice, rats, raccoons, and other vermin will make their homes there,” said Addabbo for this story.  He added that his senatorial office had not received any complaints about the residence and property at One Bayview, though plenty about the boats.

Don Riepe, Chapter Director of the American Littoral Society, said, “The issue is always: who is responsible? Boats can leech materials into the bay, and that’s cause for concern.  They should be removed.”