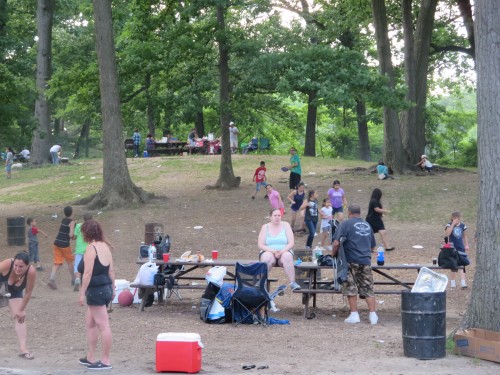 Photo: There are only about 20 PEP officers to cover every green space, including Forest Park (above), in Queens. Forum Photo by Alan Krawitz

Against the backdrop of the recent discovery of the body of 23-year-old Diego Piedrahita, found bludgeoned to death in Forest Park last week, some area residents are wondering why Parks Enforcement Patrol officers are not more visible in borough green spaces.

“We’ve never see any officers when we come to the park,” said Carlos 34, from Queens Village, who frequents Forest Park with his girlfriend at least once per week. “We didn’t hear about the murder, but I’ve never seen any park enforcement officers in this park.”

Despite the fact that city Police Department crime statistics for borough parks have fluctuated over the past year, residents and park goers are still concerned about too-few PEP officers patrolling parks.

“We are always concerned with park security in Juniper [Valley Park],” said Robert Holden, president of the Juniper Park Civic Association. “We’d like to see more of the PEP officers and urge the mayor and City Council to provide additional funding to hire more officers.”

Holden said that in Juniper there is a “nightly problem” of teens hanging out after the park closes at 9 p.m. and that vandalism has always been an issue.

“We need PEP to patrol the park and protect our beautiful park on a DAILY schedule,” he said, adding that the 104th Precinct is one of the busiest in the city and area cops are logistically unable to give the park the attention that it needs.

But the reality of PEP officers in the city is that they are vastly understaffed and also underpaid, according to their union representative.

Joe Puleo, president of District Council 37’s Local 983, which represents more than 3,000 city workers, including PEP officers, said that there are about 240 publicly-paid PEP officers citywide and another 100 officers paid through private parks organizations.

Queens has only about 20 PEP officers for the entire borough. Puleo added that it is not at all uncommon for people to not see any PEP officers due to their having to cover beaches, such as Rockaway, which is more than seven miles long.

Puleo, a former PEP officer who patrolled Forest Park in the 1990s, said that the reasons for the scarcity of officers are mainly tied to money.

Recently, Puleo said, he has gone to the City Council to advocate for more officers—with some success. “Eighty officers that were hired last year will be retained as part of the city’s new budget and that’s good, but there’s no money for any new hires,” he said.

PEP officers, while not armed, are classified as peace officers who enforce park rules and regulations and can issue summonses and arrest violators of city and state laws.

Puleo said that the lack of parity in salary has caused numerous problems with retention and recruitment.

“The job has evolved, but unfortunately the salary structure never has,” Puleo noted, adding that his officers deal with serious criminals who often come to parks and commit crimes.

Puleo said that the city Parks Department refuses to arm park police, in part because “they don’t want to admit there are problems with crime in city parks.”

A spokesperson for Parks did not respond to repeated requests for comment.

“It’s an uphill battle and we’re losing lots of good people,” Puleo said. “As soon as officers get experience and know what they’re doing, they leave.”