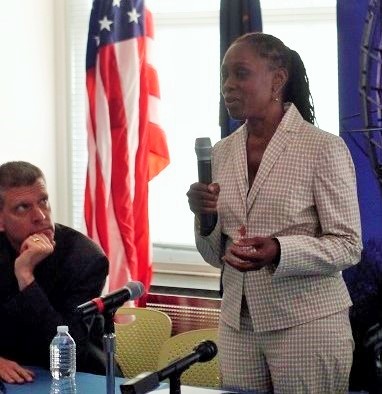 Residents of Queens patiently waited for their chance to join a line stretching from the lectern to the back of the at-capacity room in Queens Borough Hall, ready to share their concerns on New York City’s mental health system.

“I am not going to say a lot tonight, because I am here to really hear your stories,” said McCray. McCray added that her passion for mental health issues stems from her experiences with her parents, who suffered from depression, and her daughter, who has been diagnosed with depression and anxiety.

More than 30 people, many of whom work with people suffering from mental illness, described their concerns with how mental health issues are addressed throughout Queens.

“We’ve noticed the trend that even though there is a big push for mental health services, there are a lot of agencies in Queens that are closing down,” said Christine Salazar, assistant project director and therapist at the Child’s Center of New York.

The mental health system in New York City is fragmented, and it is hard to find necessary help, said McCray. While searching for help for her daughter, she became concerned about the care available for families who don’t speak English or have insurance.

“I thought it was just such a curious thing that there could be so many people suffering, so many people going through similar kinds of experiences, but no one was talking about it,” McCray said.

The DOHMH is looking into a public advertising campaign to help fight the stigma associated with mental health problems. The idea has been brought up often, and as with similar campaigns to bring awareness to the dangers of smoking and reckless driving, the department is “trying to be thoughtful about what message” the ads present, said Belkin, adding that they are looking into studying mental health problems broken down by language and ethnicity.

“One of the things that we really struggle with is finding counselors, mental health professionals that understand the cultural and linguistic sensitivities to our populations,” said Linda Lee, executive director of Korean Community Services.