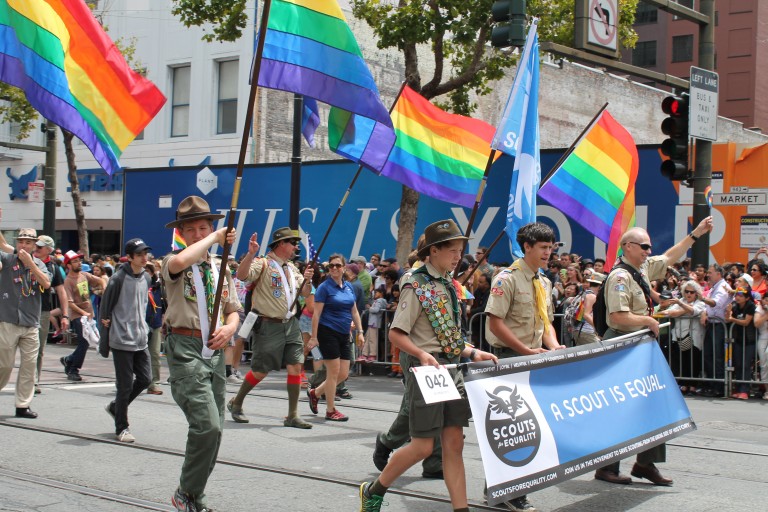 PHOTO:  The Boy Scouts of America voted to end their ban on gay adult leadership on July 27, bringing an end to an investigation by the New York Attorney General into possible discriminatory hiring practices. Photo Courtesy of Flickr/Isabelareid

New York Attorney General Eric Schneiderman announced a settlement between his office and The Boy Scouts of America after its National Executive Board voted to overturn its ban on gay leaders and employees.

“Today’s announcement is a watershed moment for the Boy Scouts of America. The mission of the Boy Scouts is to prepare our nation’s young people to become responsible citizens and leaders, and I can think of no better way of doing that than by enabling young people to learn from a diverse group of role models,” said Schneiderman.

The BSA agreed to permanently eliminate its exclusion of gay adult leaders and employees nationally, designate an equal opportunity employment officer, develop a training program for all managerial employees concerning the new standard, and monitor complaints of violations of the new standard, according to the Attorney General’s office.

Many Scouting organizations are chartered with religious organizations, the Mormon Church being the largest and accounting for 17 percent of all youths in Scouting in 2013, the last year for which data has been published.

The Mormon Church said it is “deeply troubled” by the decision and the church will need to examine its relationship with Scouting in a press release.

“The Church has always welcomed all boys to its Scouting units regardless of sexual orientation. However, the admission of openly gay leaders is inconsistent with the doctrines of the Church and what have traditionally been the values of the Boy Scouts of America,” according to a press release from the Church of Jesus Christ of Latter-Day Saints.

Chad Griffin, the president of the Human Rights Campaign, an LGBT activism group, welcomed the decision as a “step toward erasing a stain on this important organization,” but urged the BSA reconsider its decision on chartered organizations.

“Including an exemption for troops sponsored by religious organizations undermines and diminishes the historic nature of today’s decision.  Discrimination should have no place in the Boy Scouts, period,” said Griffin.

The Attorney General’s Civil Rights Bureau began investigating the BSA in April in response to concerns about whether the ban was discriminating against potential employees. According to Schneiderman, the Boy Scouts suspended their ban on gay adult leaders in New York State as a result of the investigation.

“I am pleased to see the Boy Scouts of America renew its commitment to equal protection under the law, and I look forward to the organization welcoming a new generation of LGBT scout leaders in the months and years ahead,” Schneiderman said.