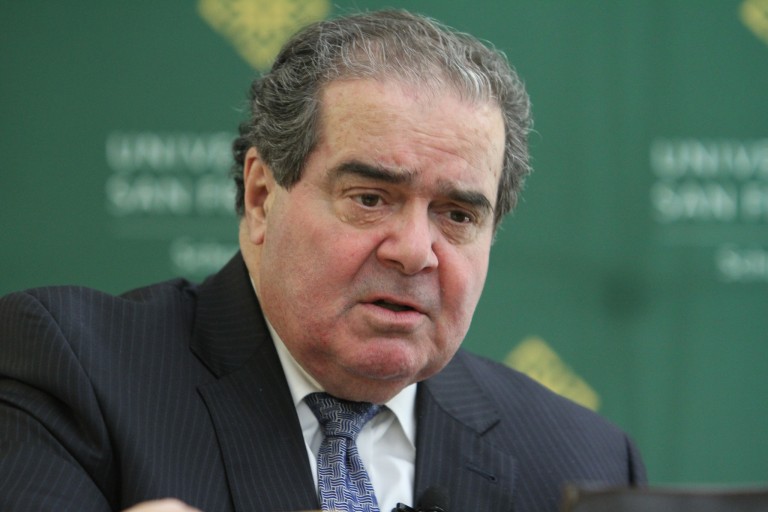 PHOTO:  Though he was born in New Jersey, Justice Scalia was raised in Elmhurst. Photo Courtesy of Flickr/Shawn Calhoun

U.S. Supreme Court Justice Antonin Scalia, conservative voice of the Nine and proud son of Queens, died last Saturday morning of natural causes while on vacation in Texas. He was 79.

Scalia served on the country’s highest court for 29 years.

“We mourn tonight for the loss of Justice Antonin Scalia,” Mayor Bill de Blasio said on Saturday. “He grew up in Queens, went to school in Manhattan and became the country’s first Italian American Supreme Court Justice. He was proud to be a New Yorker, and New Yorkers were proud to have one of their own serve as a Supreme Court Justice. The First Lady and I send our thoughts and prayers to his wife, children and other family members.”

Calling it a “mark of respect” for Scalia’s life and legacy, de Blasio ordered all flags lowered immediately until sunset on Feb. 22.

“This is sad news indeed,” said U.S. Sen. Charles Schumer (D-N.Y.). “While I disagreed with him on so many issues, Justice Scalia was a brilliant man with a probing mind. He was a great son of Queens with a genuine joy for life.”

Antonin “Nino” Scalia was born March 11, 1936 in Trenton, N.J., to Eugene and Catherine. The Scalias moved to Elmhurst, settling on O’Connell Court, when he was about 6 years old.

“A really mishmash sort of New York—a New York cosmopolitan neighborhood,” is how Scalia described his Queens community in 2008, according to a recent New York Times report

Many SCOTUS pundits have posited that Scalia’s City upbringing informed his somewhat brash, no-nonsense style on the bench.

“Scalia was a giant in the history of the law, a brilliant jurist whose opinions and scholarship profoundly transformed the law,” said Georgetown Law School Dean William Treanor. “Like countless academics, I learned a great deal from his opinions and his scholarship. In the history of the Court, few Justices have had such influence on the way in which the law is understood. On a personal level, I am deeply grateful for his remarkably generous involvement with our community, including his frequent appearances in classes and his memorable lecture to our first year students this past November.”

Scalia was appointed Judge of the United States Court of Appeals for the District of Columbia Circuit in 1982. President Ronald Reagan nominated him as an Associate Justice of the Supreme Court, and he took his seat Sept. 26, 1986.

Scalia is survived by his wife, Maureen (McCarthy), their nine children, and 36 grandchildren.