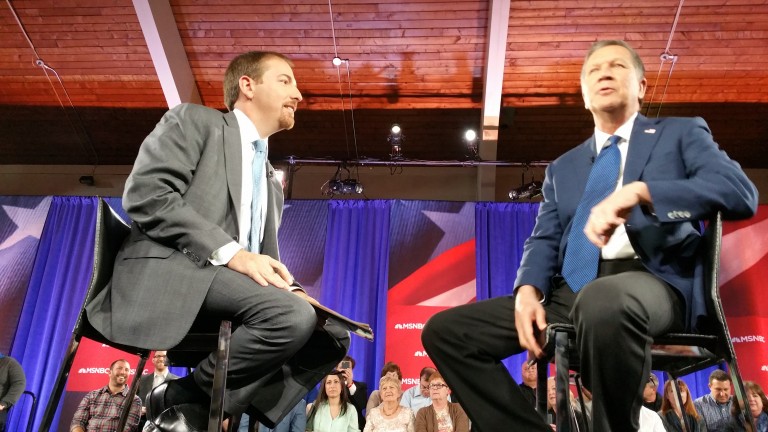 All politics is local.

Such was the case on a bright but blustery Wednesday afternoon as the Howard Beach community got a relative glimpse of a national political race at a Town Hall hosted by St. Helen Catholic Academy featuring longshot Republican Presidential candidate John Kasich.

“I love New York – it’s a precious place,” the Ohio governor gushed. “It’s the apple of the world. Just coming here is like getting a transfusion of life.

Though the public forum was announced via social media just 48 hours earlier, the 157th Avenue school was mobbed, with the overflow crowd relegated to the cafeteria downstairs and the live MSNBC telecast on a flat-screen monitor.

“Meet the Press” host Chuck Todd opened the event by peppering the moderate Kasich with queries about the tangerine-hued elephant in seemingly every room on the campaign trail, Donald Trump.

“I choose to give the people hope,” said Kasich, who appeared to be growing a bit frustrated by the line of questions. “I feel [Trump] has driven people further and further into gloom and doom.”

“Does anybody deny the greatness of our country?” he asked the crowd. “I mean, really – where would you rather live than here?”

Kasich on Wednesday also didn’t waver on his stance regarding remaining in the race, addressing what many pundits have cast as the foregone conclusion of the summer: Trump vs. Hillary.

“Honestly, I don’t think [Trump] is going to be the nominee,” he said. “Nobody’s going to have enough delegates going into the [Republican National] Convention.”

Asked about what he has characterized as the “incendiary rhetoric” that has marred the GOP campaign, and his conscious decision to stay above the at-times excessive fray, Kasich pivoted to leadership.

“The easiest people I can attack today are Muslims – then I can be popular,” he posited. “But that’s not what a leader does.”

Following the Town Hall, Kasich was scheduled to be whisked down Cross Bay Boulevard to a pizzeria for lunch.