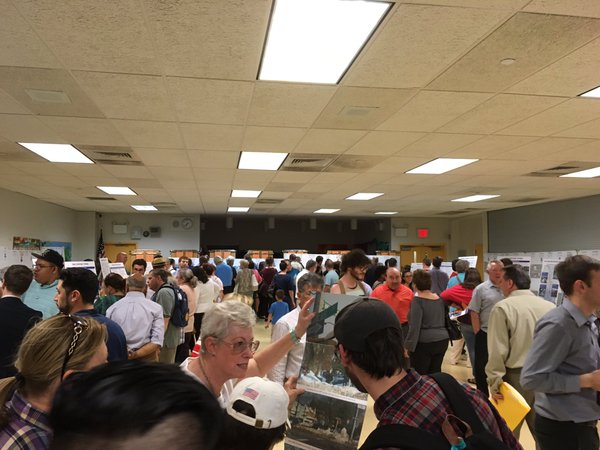 PHOTO: Members of communities that would be directly affected by the Woodhaven-Cross Bay SBS project heeded the call to attend DOT-MTA workshops on the plan. Courtesy of Alex Blenkinsopp/WRBA

A Woodhaven civic organization is urging the City Department of Transportation and the Metropolitan Transportation Authority to head back to the Rapid Transit drawing board, and pointed to “overwhelmingly critical” comments heard at the recent Woodhaven-Cross Bay Corridor Select Bus Service open houses as the latest exhibits of evidence to support its suggestion.

According to the Woodhaven Residents’ Block Association, last Wednesday evening, at the SBS workshop at PS 306 in Woodhaven, “scores of residents and business owners…asked for significant changes to the SBS plan. Many expressed concern about forcing bus riders to wait on medians in the middle of the boulevard, removing a lane of traffic 24/7 for use by buses only, and banning left turns onto major cross streets.”

These requests and concerns were lodged a couple of weeks after DOT announced that, in light of feedback from the community and elected officials regarding the SBS plans, it would institute several major changes to the proposal, including, among other suggested alterations:

At this Vision Zero priority intersection, DOT had originally proposed banning left turns onto Jamaica Avenue.  Instead, the agency has said that safer left turns will be achieved by re-engineering the left turn bays around subway columns to decrease blind spots and the frequent occurrence of north-south left-turn collisions. Wide bus stations will be added with passing lanes, according to the department, and additional parking/loading will be created near Jamaica Avenue.

“There continue to be major problems with the proposal,” he noted.

According to the WRBA, other concerns expressed at the meeting include the City’s poor track record of clearing snow from bus stops and crosswalks, the SBS plan’s failure to consider alternatives arbitrarily placed outside the scope of the project, buses’ tendency to speed, buses’ failure to use existing bus lanes on the boulevard, lack of transparency regarding data the DOT and MTA are using, impact on parking, and locations of individual bus stops.

According to the civic, some attendees expressed concern that DOT personnel were not taking their feedback seriously. On numerous occasions, residents told the WRBA, they needed to ask DOT employees to write down their input, because the city officials didn’t seem to be recording the feedback. And many residents felt that DOT staff were brushing off any feedback that was critical of the SBS plan, the civic said.

“Many residents and business owners from Woodhaven and beyond made clear that they oppose the plan as it currently stands. There’s no way DOT and MTA can move ahead in good faith without taking this feedback seriously,” said WRBA President Martin Colberg. “There has been virtually no genuine community feedback in favor of this plan, but as we saw last [Wednesday], there’s plenty in opposition.”