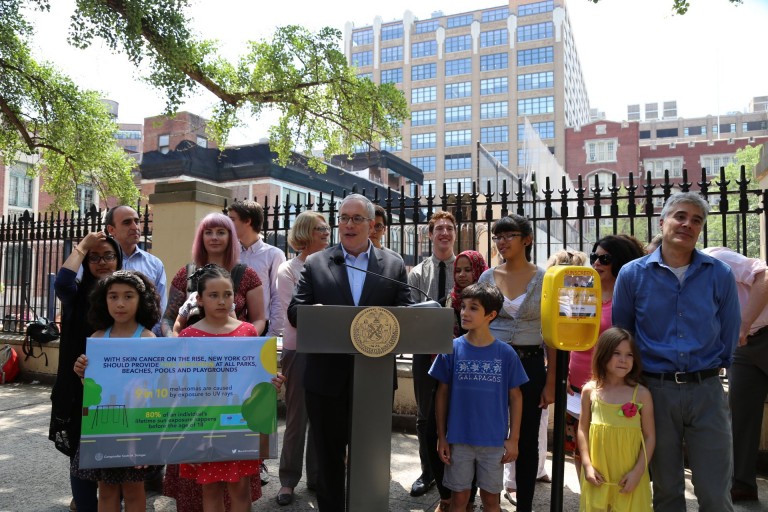 With skin cancer cases on the rise, the City should provide free sunscreen at public beaches, parks, pools, and playgrounds, said City Comptroller Scott Stringer, following the release of his report which outlines the high risk of the epidermal disease in the five boroughs.

Stringer’s proposal, outlined in a new policy brief, “Sunscreen in the City,” highlights the connection between sun exposure and skin cancer and details a series of ways the City can provide free sunscreen in public places at virtually no cost to taxpayers.

“Skin cancer is a serious public health concern, and it demands government attention,” Stringer said. “When New Yorkers head to our City’s parks, beaches, pools, and playgrounds this summer, they shouldn’t return home with a sunburn and increased risk of skin cancer. Providing free sunscreen to City residents can protect our children and save lives, and we can do it at virtually no cost to the City.”

Stringer’s report discusses statistics on skin cancer and the risks in NYC:

The comptroller’s brief examines two programs operating in Boston and Miami Beach which have provided free sunscreen for the public, at virtually no cost to the cities.

Boston has at least 20 free dispensers in city parks, funded through grants from public health groups and advocacy organizations. In the year since its launch, Stringer noted, Boston’s free sunscreen dispensers have proven so successful that the coalition is seeking to expand the program for this coming summer, both in Boston and beyond.

Miami Beach signed an innovative licensing agreement in 2014 which allows a private company to produce and market Miami Beach branded sunscreen. In return, the city receives royalties from sales, and the company operates approximately 50 free sunscreen dispensers at no cost to taxpayers. Additional funding for the program is provided by a grant from a local hospital group.

The City should explore partnerships with advocacy groups, New York-based hospitals, and other organizations, Stringer said. The administration should also consider the feasibility of crafting a licensing agreement which would harness the value of the City’s brand – already used to sell several other consumer products – to fund free sunscreen dispensers at City parks, beaches, pools and playgrounds.

“Summers in our City may be hazy, but the science here is clear: sunscreen helps, and a free sunscreen program in New York City will allow families to safely enjoy New York’s great public spaces together,” Stringer said. “This is a common sense idea that will protect all New Yorkers – especially our children – from the sun’s harmful rays.”