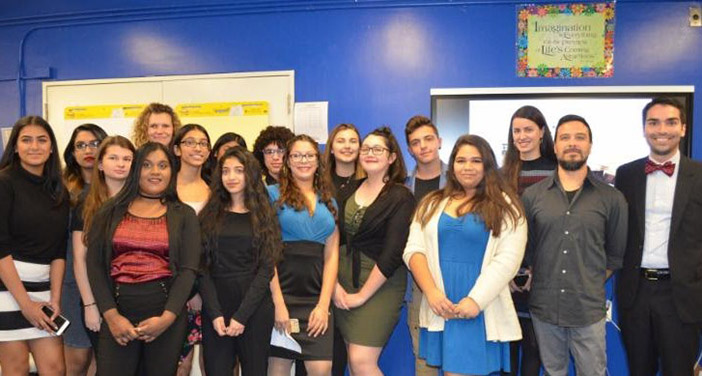 The project, developed in partnership with the Creative Art Works program, was funded by Ulrich and aims to empower public school students through the visual and multimedia arts.

“It is an honor to support this great initiative, which will benefit both our students and our community. Less than half of all New York City public schools offer an arts program and I am proud to help fill void,” Ulrich said. “I’d like to thank each of the artists for this beautiful gift to the community, which will serve as an important reminder of the many sacrifices made by our brave men and women in uniform.”

The mural, entitled “For Our Tomorrow,” consists of five large canvases that honor the diversity, sacrifice, and courage of veterans and their families who “gave up their today for our tomorrow.” The original canvases will be on display at the St. Albans Community Living Center – a U.S. Department of Veterans Affairs facility on Linden Boulevard. A reproduction of the mural will also eventually be on permanent display underneath the Belt Parkway overpass on 84th Street in Howard Beach.

“We think it is important to honor our veterans from all branches of the military because they gave up their privileges so we could keep ours,” the students added. “It is also important to pay respect to the families of our veterans because it is not easy to let go of a loved one. It takes a lot of courage to voluntarily put yourself in a situation even though you are aware of the risks and dangers.”

The artwork was created by 15 students as part of an after school-program that included an apprenticeship component, according to Ulrich’s office. Apprentices were guided by professional teaching artists from the initial concept development through the presentation to the final brush stroke and public unveiling.

“I am so proud of each Goddard student who dedicated their talent, skills, and time to the mission of creating a veterans mural that celebrates the commitment and sacrifice of our soldiers,” said Principal Joseph Birgeles. “I thank Councilman Ulrich for bringing this program to our school.”