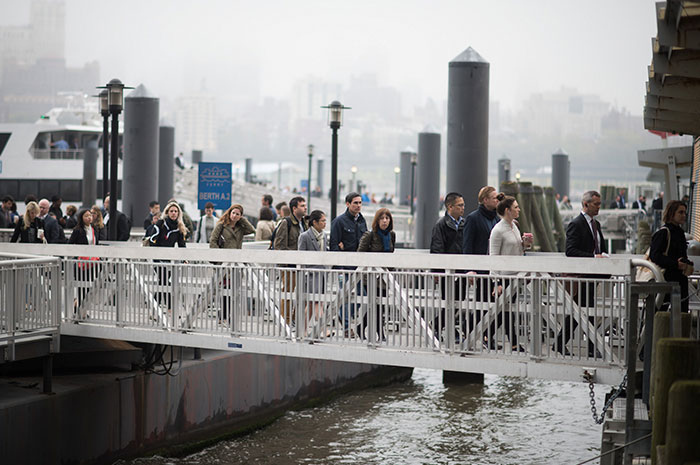 The City has chartered two additional vessels for the summer season.

By Michael V. Cusenza
The de Blasio administration may have underestimated the immediate popularity of NYC Ferry, the City’s sea-faring public transit option that has drawn enormous weekend crowds that have forced transportation officials to charter more vessels, according to a recent New York Times report.
The City is renting “two extra boats — each capable of carrying 400 people — to handle summer weekend crowds, at a cost of $485,000 for the summer, or about $60,000 per weekend,” the Times wrote.
Additionally, the Grey Lady reports, the demand has compelled the administration to change the City’s existing order for new vessels from NYC Ferry operator Hornblower.
The original arrangement “called for 20 boats from two shipyards on the Gulf Coast, each of which can hold 149 passengers. Now the City has asked that three of the 20 boats be larger, outfitted with bigger engines and with a capacity to hold 250 passengers, officials said [last] Wednesday. Those boats would not be ready until next year.”
Mayor Bill de Blasio and borough elected officials last month celebrated the grand opening of the first two routes of NYC Ferry with a ceremonial first ride from the Rockaways to Manhattan.
Mayor Bill de Blasio was a passenger on the ceremonial first voyage of the Urban Journey vessel, along with the boat’s official godmother, Laura Deckelmann. Last year, Rockaway activists Danny and Linda Ruscillo set up a petition to have the Beach 108th Street NYC Ferry dock named “Deckelman’s Landing,” after the longtime Rockaway Ferry advocate.
“The ferry will finally link the rest of New York City to Rockaway, so that visitors can experience all the benefits the peninsula has to offer,” said State Sen. Joe Addabbo, Jr. (D-Howard Beach).
The Rockaway route officially launched on Monday, May 1, at 5:15 a.m. – a month ahead of schedule. It offers service between Beach 108th Street, the Brooklyn Army Terminal, and Wall Street’s Pier 11.
And on June 1, the South Brooklyn Route – which links Bay Ridge, Sunset Park, Red Hook, Brooklyn Bridge Park and Wall Street – will begin. Astoria service will launch in August, with the exact date still being determined. The final routes, the Lower East Side and Soundview routes, launch in 2018.
According to the City, once the NYC Ferry system is fully operating in 2018, the combined routes will cover more than 60 miles of waterway at $2.75 per ride, the same cost of a subway ride. In April, the City Economic Development Corporation and Hornblower announced that the cost of a 30-day unlimited ferry pass will be $121, the same as a 30-day MetroCard.