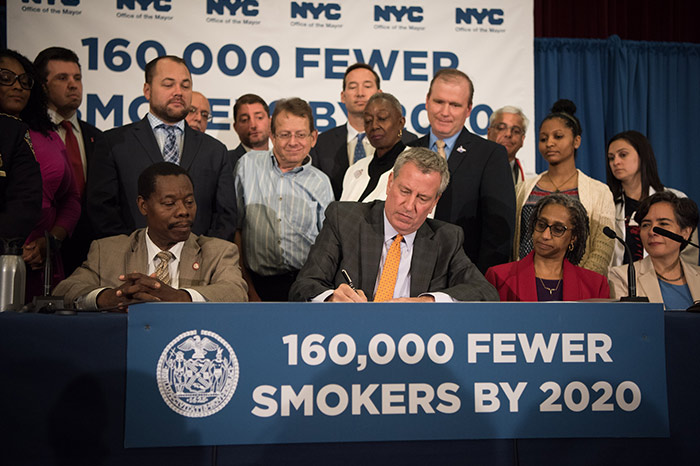 The new legislation raises the minimum prices for all tobacco products, including cigarettes, to $13 a pack.

By Forum Staff
Mayor Bill de Blasio on Monday signed seven bills to help reduce the number of smokers in the city by 160,000 by 2020.
According to the administration, while smoking rates in the five boroughs have declined to 14.3 percent in 2015 from 21.5 percent in 2002, the city still has more than 900,000 smokers. The new series of laws will help decrease the smoking prevalence to a historically low rate of 12 percent by 2020, the City said.
“I am excited to witness the impact these bills will have on the lives of New Yorkers,” said Dr. Herminia Palacio, deputy mayor for Health and Human Services. “These bills tackle smoking and tobacco in a comprehensive manner that will both save lives and reduce preventable diseases. In offering New Yorkers healthier options – from where they shop to the buildings they live in – we bring all of our City’s resources to bear so that we can all live longer and healthier lives.”
The administration has said that the new legislation will put NYC at the forefront of smoking and tobacco control by: raising the minimum prices for all tobacco products, including cigarettes, to $13 a pack from $10.50, and imposing a new 10-percent local tax on tobacco products other than cigarettes; capping and reducing through attrition the number of tobacco retailers citywide; creating a retail license for e-cigarettes and capping the number of e-cigarette retailers; increasing the fee for a cigarette retail dealer license; requiring all residential buildings to create a smoking policy and disclosing it to both current and prospective tenants; prohibiting smoking and the use of e-cigarettes in common areas in multiple dwellings with fewer than ten units; and banning the sale of tobacco products at pharmacies.
“Even though tobacco is a leading cause of premature death across the country, Big Tobacco will stop at nothing to hook people on these deadly products,” de Blasio said. “We are sending a loud and clear message that we will not let their greed kill any more New Yorkers without a fight. These new laws will not only help reduce the number of smokers in our city, but also save lives.”
According to the administration, tobacco continues to be a leading contributor to preventable, premature death in the five boroughs, killing an estimated 12,000 people annually. Despite an overall decline on smoking rates among young people, youth have increasingly used a range of other tobacco products: youth cigar, cigarillo, little cigar, smokeless tobacco, and hookah use, together, exceed cigarette use. Nearly nine out of 10 smokers first tried smoking before age 18. In the city, adolescent use of e-cigarettes is more than double the current smoking rate, 15.9 percent compared with 5.8 percent.