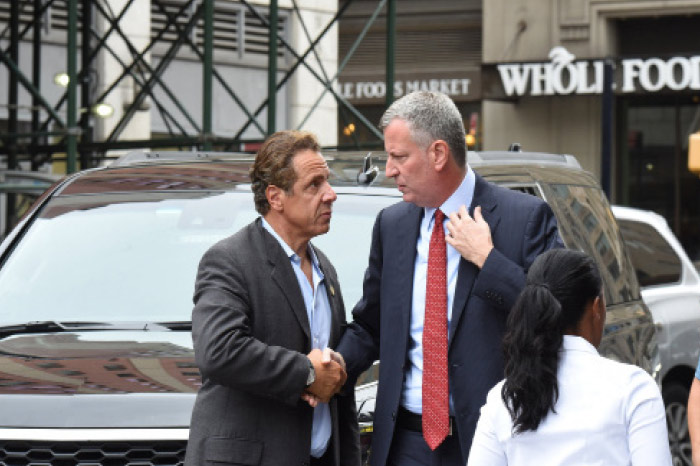 A dysfunctional relationship of dynastic proportions recently reared its ugly head, and once again, the children bore the brunt of the fallout.
We’re of course referencing the time-honored, hate-hate dynamic that is Gov. Andrew Cuomo-Mayor Bill de Blasio.
Last Thursday, after Bronx District Attorney Darcel Clark announced the indictment of more than two-dozen gang members for attacks on fellow inmates and two City Department of Correction officers in Rikers Island facilities, Cuomo counsel Alphonso David blasted the de Blasio administration’s plan to close the infamous jail system over a 10-year period.
“Saying it will take 10 years is tantamount to saying we have no real plan to close it. Ten years may see three different mayors and three different City Councils. This proposed closing plan will have no relevance to those administrations—Gov. Cuomo, for example, is not 10 years later implementing Gov. [Eliot] Spitzer’s plans,” David said. “ln short, this 10-year timeline ignores the urgent need for action now. Ten years condemns thousands more young people to be abused by Rikers. How many people have to die and how many lives have to be ruined to make government act? We need action now.”
And de Blasio just couldn’t let an unprovoked, harshly worded attack lie. Can you blame him?
“As [New York] attorney general, Andrew Cuomo was silent on Rikers Island. As governor, Andrew Cuomo leads a state prison system marred by abuse, neglect and escapes. He runs a state court system responsible for many inmates being on Rikers Island too long,” said City Hall Press Secretary Eric Phillips. “His new-found concern is welcome, but unless the governor is willing to reform his own embattled state prison system and court system, it’s impossible to see his outburst as anything but political theatre.”
Ouch.
This isn’t the first time these loquacious lovebirds have attacked each other in newsprint. Both have taken veiled and not-so-veiled shots at each other numerous times since de Blasio moved into Gracie Mansion, clashing over everything from bridge lighting to MTA funding—and seemingly everything in-between.
But while this uniquely New York version of “political theatre” is admittedly entertaining from a journalist’s perspective, as proud, tax-paying Empire State residents, it has become increasingly embarrassing. The petty war of words has to come to an end – for the sake of progress; the value of a unified political power couple on the national stage; and the general sanity of the people that pay their salaries.
It has gotten so bad that Hillary Clinton, speaking at last year’s Al Smith Dinner in the city, and with The Donald in the house, took a memorable swipe at Andy and Bill.
“Your Eminence,” Clinton said to Timothy Cardinal Dolan, also in attendance, “you do deserve great credit for bringing together two people who have been at each other’s throats, mortal enemies, bitter foes. I’ve got to ask: How did you get the governor and mayor here together tonight?”
Make up or break up, fellas. But, please, do us all a favor and shut up.