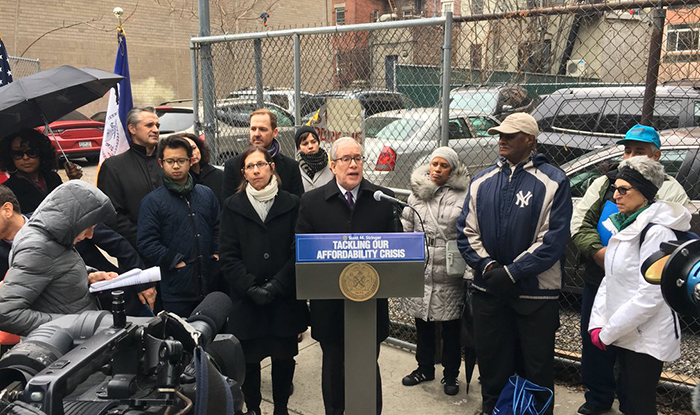 Photo Courtesy of the Comptroller’s Office

“We need to leverage every resource we have to help working families get by,” Stringer said.

By Forum Staff
The NYC Department of Housing Preservation and Development is dragging its feet on building new affordable units on hundreds of empty, City-owned lots, according to Comptroller Scott Stringer, who released a scathing follow-up report on Monday detailing how more than 1,000 properties—most of which HPD earmarked for residential development—continue to sit vacant.
According to Stringer, the City has owned up to 900 of these lots for at least 20 years—some even up to 50 years.
In 2016, an audit by Stringer’s office on vacant lots owned by HPD, which found more than 1,100 City-owned properties, including many that could be used to build affordable housing were instead languishing, often vacant, and often neighborhood eyesores. That same year, Stringer also issued a report, “Building an Affordable Future: The Promise of a New York City Land Bank,” which outlined how the City could use a land bank to develop an estimated 57,000 units of permanently affordable housing on said vacant lots and a smaller number of privately-owned, tax-delinquent properties. Those properties, through a land bank/land trust, could be used to develop housing, mitigate the homelessness crisis, and improve the availability of truly affordable units across the five boroughs, according to the comptroller.
Monday’s review found that between September 2015 and September 2017:
Nearly 90 percent of the vacant lots that were in its inventory two years ago remain undeveloped.
1,007 lots in the audit sample have remained in HPD’s inventory, and have not been transferred to developers.
HPD transferred only 64 of the 1,125 lots for development.
HPD transferred only 54 of the 1,125 lots to other City agencies for use.
Stringer noted that while HPD has previously claimed it had plans to develop several hundred lots, the agency did not meet its own target dates for nearly 80 percent of the properties that it projected would be transferred to developers through June 2017. Instead, it pushed most of the target dates for development further into the future. Stringer pointed out that at the rate established in the past two years, it will take HPD approximately 17 years to transfer all 1,007 lots either for development or to another agency.
According to the comptroller, that track record directly contradicts the agency’s response to the 2016 audit, in which HPD said, “Approximately 670 of these properties are suitable and feasible for residential development. Roughly 400 of these have been designated or are earmarked for developer designation within the next two years.”
HPD strongly disagreed with Stringer’s findings, and did not address the report’s three recommendations. Rather than responding directly to the follow-up review’s specific conclusions, HPD “recites the reported accomplishments of the mayor’s Housing New York plan, a matter not at issue in either the original audit or this follow-up review,” Stringer said, claiming that the central findings of the audit “are undisputed: more than 1,000 lots in HPD’s inventory have remained undeveloped during a housing crisis, some of them for as long as 50 years, and HPD’s projected transfer dates for most of those lots either have been repeatedly deferred or are yet ‘to be determined.’”