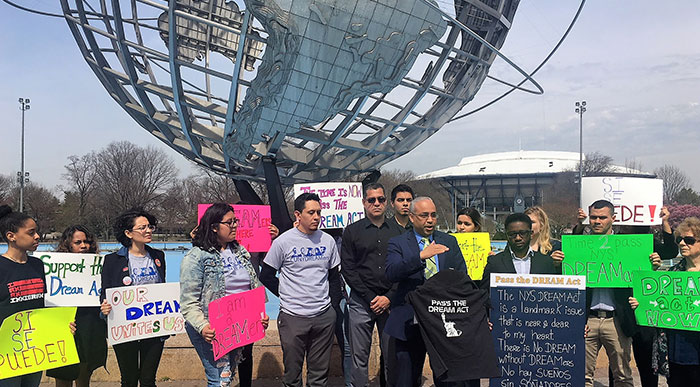 Senator Peralta urged approval of his NY DREAM Act in remarks delivered on Friday at the base of the Unisphere in Flushing Meadows-Corona Park.

By Forum Staff
State Sen. Jose Peralta (D-East Elmhurst) on Friday led a rally in Flushing Meadows-Corona Park urging his Senate colleagues to pass the New York State DREAM Act, which would, in part, allow undocumented immigrants to receive State financial aid for college, before the end of the legislative session in June.
Peralta, the bill’s sponsor, noted that of the more than 4,500 undocumented residents who graduate from a New York high school every year, only approximately 5-10 percent go on to college—due mainly to economic obstacles.
“This is an injustice. It’s time to right this wrong, especially now, when New York is under attack from the White House. Amid this political climate, the state has become the front lines to protect New Yorkers,” Peralta said, standing in front of the Unisphere. “Making the DREAM a reality will cost the average taxpayer 87 cents, not even a dollar. This is an investment, since the average college graduate pays every year about $4,000 more in State taxes than New Yorkers without a college degree.”
According to the Mayor’s Office of Immigrant Affairs, in 2017, DREAMers contributed $4.7 billion to the City’s Gross Domestic Product.
The bill, which is mired in the Senate Higher Education Committee, would create a DREAM Fund Commission and a DREAM Fund in order to advance the educational opportunities of the children of immigrants by providing scholarships to college-bound children of immigrants.
The NY DREAM Act, according to Senate records, would also eliminate potential financial obstacles to obtaining State financial aid and extend the opportunities for certain immigrant students to attend higher education institutions in New York; providing a benefit consistent with U.S. citizens and nationals.
Additionally, the bill would eliminate barriers for immigrant aliens to save for their families’ higher education expenses by allowing such individuals to open a State 529 family tuition account under the State College Tuition Savings Program and/or be a designated beneficiary on an account if they have a taxpayer identification number.
“Passing the DREAM Act provides hope and opportunity, creates jobs, and boosts future tax revenue. It’s a win-win situation for all,” Peralta added. “It does not make sense to keep blocking the passage of the DREAM Act. Devoting a very small fraction of the $168 billion State Budget is the right thing to do, both morally and economically. Let’s end the nightmare and begin the DREAM.”