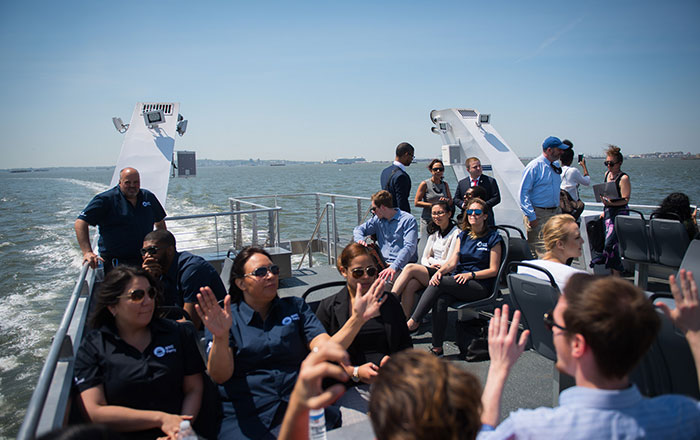 By Michael V. Cusenza
If you build it, they will come—in droves, apparently.
Ridership of the wildly popular NYC Ferry, which launched just a year ago, could grow to as many as 9 million annual passengers by 2023, twice as many as initially projected, forcing the City to invest in a bigger fleet to meet that demand, Mayor Bill de Blasio announced on Thursday.
“We’re going to be able to increase service right away and cut wait time in the process. We’re going to be doubling the size of our fleet and there’s going to be a lot more of the bigger boats that will allow us to get a lot more people where they’re going and reduce the wait, reduce the lines,” Hizzoner said. “So, you know the phrase that they say? You can never have too much of a good thing. Well, I disagree. We want to have a lot more of a good thing and that good thing is NYC Ferry.”
The Executive Budget, which de Blasio unfurled late last month, includes $300 million in capital over the next several years ($35 million in Fiscal Year 2019) for new 350-passenger capacity vessels, improvements to piers and docks, and a second homeport where ferries will be maintained and repaired.
According to the administration, City investments in NYC Ferry will also include: infrastructure improvements and upgrades to existing ferry barges and landings to accommodate larger crowds; improvements to the City’s two main ferry terminals, Pier 11/Wall Street and E 34th Street, which see the highest traffic on a daily basis – these include wider gangways and new bow-loading locations to increase the number of vessels that can dock simultaneously.
Additionally, to meet the expected surge in demand in the spring and summer, NYC Ferry has pledged to:
• Deploy three brand new 350-passenger NYC Ferry boats by later this summer to service the busiest routes.
• Deploy up to eight charter vessels this summer, each with capacity between 250-500 passengers.
• Beginning Memorial Day Weekend, Governors Island will now be the last stop on the East River and South Brooklyn routes, increasing service to the popular summer destination.
• Increase service frequency with boats arriving every 20-30 minutes on weekdays and weekends on all four routes, compared to 25-60 headways for the same service last summer.
• Launch a new express service on the Rockaway route to and from Pier 11/Wall Street during weekday rush hour and on weekends, doubling capacity during these busiest times.
• Increase service from Brooklyn Army Terminal by 20 percent on the Rockaway route.
• Increase staffing at ferry landings to assist riders with queuing and boarding.
“This is the key to a future of New Yorkers being able to get around more easily and being able to have the kind of choices that they deserve for the thing that decides so much of your life: getting from point-A to point-B,” de Blasio added. “If you don’t have access to transportation that works, you don’t have access to education, you don’t have access to jobs, you certainly don’t have the quality of life you deserve. So, all the folks that are frustrated with their commute each day, here’s a new option that’s getting stronger all the time.”