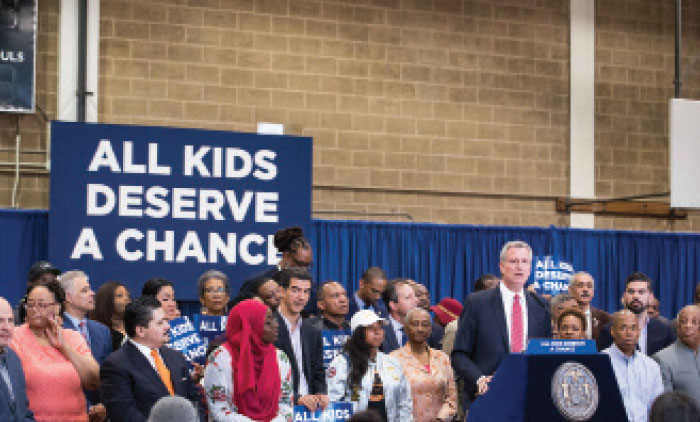 You know you’re getting older when you find yourself using phrases such as “remember when” and “used to” way too often over the course of a given day.
Indulge us for a few moments.
Remember when you had to work hard to earn what you wanted? It used to be that diligence, sacrifice, and merit were the keys to success.
Boy, have things changed. Dramatically. And not necessarily in a positive direction.
This week, Mayor Bill de Blasio and Schools Chancellor Richard Carranza unveiled a new two-pronged plan to make admissions to the city’s eight testing Specialized High Schools “fairer” and “improve diversity.”
According to the administration, this departure from decades of accepted admissions practices to Queens High School for the Sciences at York College; The Bronx High School of Science; The Brooklyn Latin School; Brooklyn Technical High School; High School for Mathematics, Science and Engineering at the City College of New York; High School of American Studies at Lehman College; Staten Island Technical High School; and Stuyvesant High School is desperately needed.
Why? Because, according to the City, the student population at the eight SHS is “not representative of” the city’s high school population: 10 percent of specialized high school students are black or Latino, despite making up 70 percent of the Big Apple’s overall student population; female students comprise 44 percent of SHS offers, but 48 percent of all NYC high school students. In 2016, 21 middle schools – or 4 percent of all city middle schools – comprised about 50 percent of SHS offers.
The mayor singled out the single-admissions test as the reason for paltry diversity numbers. So he wants to ELIMINATE it over the next three years.
“This is an issue that really brings out strong feelings in all of us, because we want the best for our children. We have such hope for our children. We love them, we cherish them. I talk to parents all over the city, I talk to grandparents all over the city. Number one thing they think about is helping their children get the best education possible. It’s our job to make sure that’s a reality,” de Blasio said. “Can’t do it with the status quo. This status quo is broken. We have to make a major change, we have to make sure the very best high schools are open to every New Yorker, every kind of New Yorker. They need to look like New York City.”
Why? Why is this such an imperative? Specialized schools need to look like the students who earned their seats in the institution’s classrooms.
Also, why were blacks and Latinos spotlighted by the City here?
“You work hard, play by the rules and get nowhere fast,” tweeted City Councilman Eric Ulrich (R-Ozone Park). “Now the mayor wants to do away with merit and academic rigor for admission to the city’s top performing high schools. I guess Chinese, Korean and South Asians don’t count as minorities to the mayor.”
Guess not.
We applauded this administration’s hard work and drive that established the successful free pre-K program. All hyperbole aside—that was a life-changing achievement for so many city residents.
It worked because the administration made it all about the student. That’s what education should be about at all levels.
Change the student, not the school.
The elimination of the single-admissions test requires State legislation. Contact your assembly member and State senator and let them know how you feel about this subject.