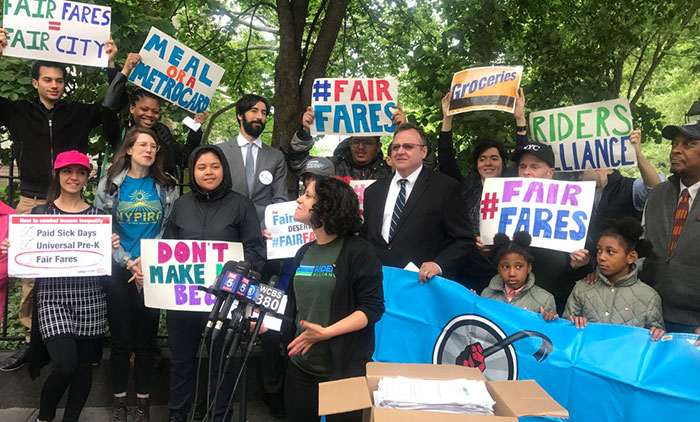 Proponents of the Fair Fares proposal rallied outside City Hall on Sunday.

By Michael V. Cusenza
Subway and bus riders, advocates and activists gathered on the steps of City Hall last weekend to urge the mayor to include funding in the Fiscal Year 2019 Budget for Fair Fares, the program that would provide half-price MetroCards to residents living below the federal poverty line.
Mayor Bill de Blasio in April unveiled his FY2019 Executive Budget, hammering home the ultimate goal of his second and final term: to make NYC the fairest big city in America. However, the $89 billion plan did not feature any mention of Fair Fares.
The City Council included the proposal in its FY 2019 Preliminary Budget Recommendations.
“The administration should fund a program to provide half-fare MetroCards to individuals and families living below the poverty level so that approximately 800,000 low-income people could save up to $726 per year,” Council leadership stated.
And so the budget dance commenced. With the new spending agenda due by the end of the month, low-income commuters joined grassroots public transit organizations, including the Riders Alliance and the New York Public Interest Research Group’s Straphangers Campaign, at City Hall on Sunday to ask Hizzoner to heed the call of the council on Fair Fares. Riders and advocates who sent a letter (below) last month to the mayor requesting he meet to discuss their urgent need for Fair Fares—and received no response—set up a table and recorded their own video testimonials on a cell phone. In lieu of in-person conversations, the testimony was directed at a rider-advocate playing a substitute “mayor.”
“When we didn’t hear from [de Blasio], we came down to City Hall to meet him on our day off and remind him that New York just can’t be the fairest city without giving struggling riders a break on our subway and bus fare this year,” said Gustavo Febles, a Riders Alliance member and grocery store employee from Brooklyn.
Last year, de Blasio proposed a millionaire’s tax to help fund the Metropolitan Transportation Authority’s Subway Action Plan. Recently, he pointed to that proposal as a practical way to subsidize a Fair Fares program.
“I believe in Fair Fares as an idea,” the mayor said last month. “I think we can get there through the millionaire’s tax which also is an example to me of fairness. Ask those who are doing the very best in our society to pay a little more in taxes, New York City residents only, so we can fund Fair Fares and provide an ongoing revenue stream to the MTA so they can fix their bigger problems for the long term. That, by the way, I think is more viable than ever given some of the political changes we see in Albany.”