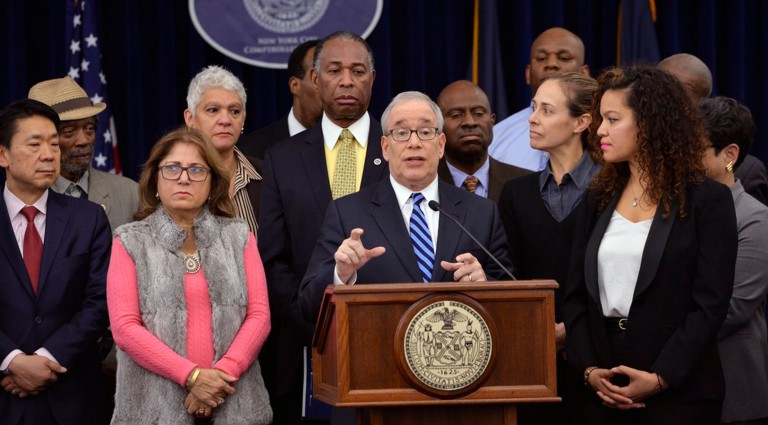 “There must be a comprehensive and transformative solution to fix the commercial waste industry,” Comptroller Stringer said.

By Forum Staff
Aging truck fleets, lapses in safety, and poor traffic records among the city’s 273 commercial waste haulers compromise public safety, according to a scathing report released on Monday by City Comptroller Scott Stringer.
Key findings of “Unsafe Sanitation: An Analysis of the Commercial Waste Industry’s Safety Record” include:
• Commercial garbage trucks are significantly older and more decrepit than their municipal counterparts. Almost 50 percent of private garbage trucks are 10 years old or older. A further 9 percent of trucks are at least 20 years old. In contrast, City Department of Sanitation vehicles average 6 years of age.
• Private waste haulers routinely rack up safety violations relating to the maintenance of their trucks. Among the city’s top 20 commercial haulers, two-thirds of inspections resulted in at least one violation in the last two years and 20 percent of inspections produced five or more violations. These violations are not cosmetic – the most commonly issued violation related to defects in a truck’s brakes.
• Many commercial waste trucks have racked up fines for running red lights and speeding near schools. Twenty-seven percent of vehicles owned by licensed waste haulers have received at least one red light camera violation and 14 percent have received at least one school speed zone camera violation since 2007.
• The City has caught 178 licensed trade waste vehicles operating with expired or missing inspection stickers and 41 with missing plates. Within this group, 71 vehicles have been caught more than once with inspection sticker violations and 12 vehicles have been caught multiple times for missing plates.
• Over the past two years, the top 20 licensed private waste haulers in the five boroughs reported 73 serious crashes, including five fatalities.
“Commercial waste disposal is an essential service which keeps New York City clean and functional. Unfortunately, a combination of intense competition and lax oversight has fostered a ‘race-to-the-bottom’ dynamic amongst haulers. As a result, the private garbage trucks trundling down a residential street or running a red light could pose a real danger to the public,” according to the report.
Stringer on Monday emphasized his support for the implementation of a zoned system for commercial waste disposal. He also advocated for stronger safety standards and better labor protections, which could reduce accidents.
“There must be a comprehensive and transformative solution to fix the commercial waste industry. Commercial garbage trucks are overrunning our communities, choking the air with smog and endangering our families,” the comptroller said. “We need a zoned system that prioritizes higher safety and wage standards for workers and will hold commercial waste companies accountable to those standards.”
According to preliminary research by DSNY, a zoned system could reduce vehicle miles traveled by 49 to 68 percent and cut emissions by 42 percent to 64 percent—drastically reducing the noxious pollution pumped out by sanitation trucks.
“From collection to disposal, New York City deserves a commercial waste system which prioritizes safety and sustainability,” the analysis concludes.