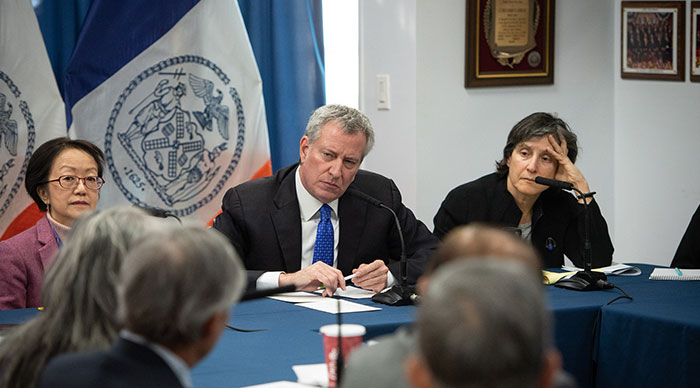 By Michael V. Cusenza
The special election for public advocate has been scheduled for Feb. 26, Mayor Bill de Blasio announced on Saturday.
“This date will help maximize voter turnout, and my administration will work around the clock to make sure every New Yorker is encouraged to exercise their right to vote,” Hizzoner added.
Public Advocate Tish James won the election for State attorney general. She was sworn in Tuesday evening on Ellis Island in an inauguration ceremony that also featured Gov. Andrew Cuomo, Lt. Gov. Kathy Hochul, and State Comptroller Tom DiNapoli.
The field vying for this citywide office is already crowded—with even more hopefuls expected to throw their proverbial hats into the ring. City Councilmen Eric Ulrich (R-Ozone Park), Jumaane Williams (D-Brooklyn), Rafael Espinal (D-Brooklyn), Ydanis Rodriguez (D-Manhattan) have declared, as well as former Council Speaker Melissa Mark-Viverito; and Assemblyman Ron Kim (D-Flushing) announced his candidacy last month.
Radio host, founder of the Guardian Angels, and State Reform Party Chairman Curtis Sliwa has also declared that he will run in the special election. Curiously, Sliwa for many years has called for the abolishment of the office he’s seeking.
“It is clear by now that the public advocate position has just become a taxpayer-funded method to run for mayor of the city of New York,” Sliwa told the New York Daily News in 2017.
Ulrich, whose 32nd Council District covers most of South Queens, including Howard Beach, Ozone Park, Richmond Hill, and the Rockaways, made it official on Dec. 10 with a 70-second YouTube video.
“I’m running for public advocate because I believe that we as a city deserve better, and because I want to give a voice to the majority of New Yorkers who this mayor continues to ignore,” the councilman said in the clip.