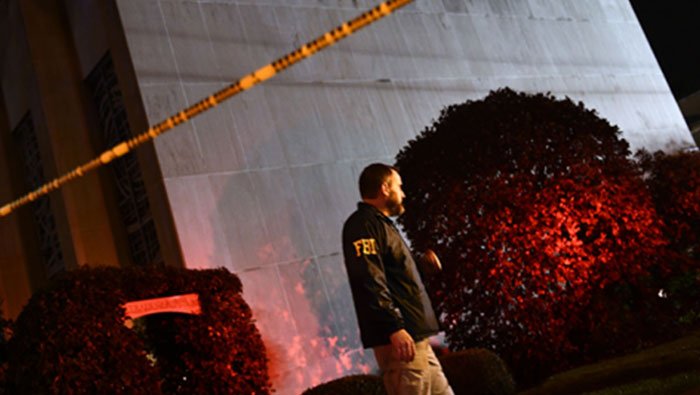 Eleven people were killed at the Tree of Life synagogue massacre in October 2018 in Pittsburgh.

By Michael V. Cusenza
Anti-Semitic assaults doubled in 2018, while attacks against Jews and Jewish institutions across the country remained at near-historic levels, the Anti-Defamation League announced this week.
The ADL’s annual Audit of Anti-Semitic incidents, released on Tuesday, tracked a total of 1,879 attacks in 2018, the third-highest year on record since the international Jewish non-governmental organization started tracking such data in the 1970s.
According to the report, there were 39 anti-Semitic assaults last year, marking an increase of 105 percent from the 19 incidents reported in 2017. Those incidents affected 59 victims, up from 21 in 2017, and include the 11 fatalities and two injured congregants in the attack at the Tree of Life synagogue in October in Pittsburgh.
Additionally, 1,066 incidents of anti-Semitic harassment were reported to ADL last year, a 5-percent increase from 1,015 in 2017, and a 48-percent increase from 721 in 2016; and 774 incidents of anti-Semitic vandalism were recorded in 2018, down 19 percent from 952 in 2017, but up 52 percent from 510 in 2016.
The ADL pointed to “a dramatic surge in white supremacist propaganda activity nationwide” as the major reason for the staggering upward trend over the last three years.
“We’ve worked hard to push back against anti-Semitism, and succeeded in improving hate crime laws, and yet we continue to experience an alarmingly high number of anti-Semitic acts,” ADL CEO and National Director Jonathan Greenblatt said. “We unfortunately saw this trend continue into 2019 with the tragic shooting at the Chabad synagogue in Poway. It’s clear we must remain vigilant in working to counter the threat of violent anti-Semitism and denounce it in all forms, wherever the source and regardless of the political affiliation of its proponents.”
The League also noted that anti-Semitic incidents took place in nearly every state across the country but, consistent with prior reports, the states with the highest number of incidents tend to be those with the largest Jewish populations. These include California (341); New York (340); New Jersey (200) and Massachusetts (144). Combined, these states accounted for more than half of the total incidents in the United States.
In response to the historic rise in incidents, the ADL made these policy recommendations this week:
• Congress should hold additional hearings on the increase in hate crimes, the rise of extremist groups and proliferation of their propaganda, and support legislation, including the Domestic Terrorism Prevention Act, which calls on the federal government to improve coordinated responses and collect data on domestic terrorism.
• Policymakers must support efforts to provide law enforcement officials with the tools and training they need to prevent and effectively respond to hate crimes. Federal, state and local law enforcement agencies should also improve their procedures for responding to and reporting hate crimes.
• School districts should promote anti-bias and bullying prevention programs in elementary and secondary schools. University leadership should respond firmly and forcefully to anti-Semitic acts on college campuses, including incidents that target Jewish students because of their actual or perceived support of the state of Israel. Congress, the U.S. Department of Education, state legislators and mayors should increase funding to promote an inclusive school climate and for anti-bias education and hate-crime prevention.