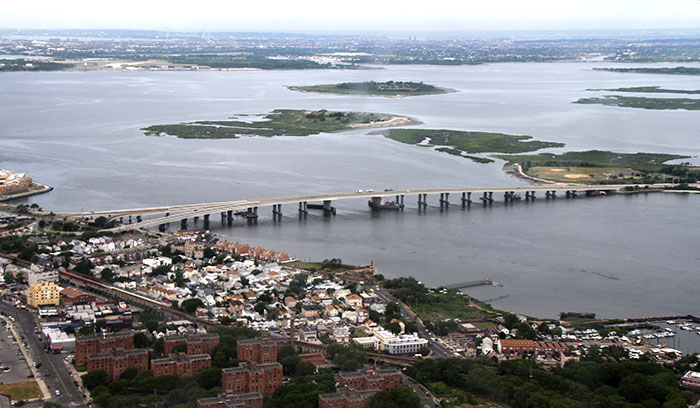 “Jamaica Bay is a critical natural resource and an environmental jewel that needs to be carefully protected,” Sen. Addabbo said.

By Forum Staff
The State Senate and Assembly have voted in favor of a measure to permanently extend protections against contamination in Jamaica Bay, the bill’s sponsor, Sen. Joe Addabbo, Jr. (D-Howard Beach), announced Monday.
According to Addabbo, the original law he crafted in 2014 barred the State Department of Environmental Conservation from approving any plans by the U.S. Army Corps of Engineers to place hazardous dredged materials into the estuary’s borrow pits. These are areas of Jamaica Bay’s floor where excavations have been made to allow for the passage of larger ships.
Under current law, the senator noted, these environmental safeguards expire on June 30 of 2022.
“The delicate ecology of Jamaica Bay, which includes unique salt marshes, demands that we implement permanent protections to guard against any environmental degradation that may result in a loss of wildlife habitat, compromised water quality, or other negative consequences for the area,” Addabbo warned. “Simply said, we need to remain vigilant to ensure that our beautiful bay isn’t ever allowed to become a dumping ground for harmful pollutants.”
The senator called the bay “a tremendous asset” to his Senate district and to the entire nation. The Jamaica Bay Wildlife Refuge is one of the most widely acknowledged and respected bird sanctuaries in the Northeastern United States. The bay itself presents opportunities for local residents and visitors to fish, boat, scuba dive, and other recreational activities.
“Jamaica Bay is a critical natural resource and an environmental jewel that needs to be carefully protected,” said Addabbo. “I am pleased my Senate colleagues have joined with me in passing this legislation to help keep our bay pristine both today and for all future generations.”
Addabbo also highlighted on Monday the guidance and input of long-time Broad Channel resident and Jamaica Bay Ecowatchers President Dan Mundy, Jr.
“The Jamaica Bay Ecowatchers consider this bill to be one of the most critical pieces of legislation protecting the bay in the last three decades,” Mundy said. “The constant threat from City, State and federal agencies to use the deep portions of Jamaica Bay as a garbage dump for contaminated sediment has long been one of the biggest threats to the future of the bay. While these threats started to appear decades ago, they have found new supporters as various dredging projects around the city have created a need to get rid of sediment that is often contaminated. In addition, the research that has more recently come to light highlights the amazing role that the deep portions of the bay play in supporting massive amounts of marine life that would cease to exist should they be filled in. We commend Sen. Joe Addabbo and Assemblymember Stacey Pheffer Amato for their efforts on this bill and in fighting to protect Jamaica Bay for future generations by making permanent the prohibition on dumping contaminated fill into the waters of this bay.”
The companion measure, sponsored by Assemblywoman Stacey Pheffer Amato (D-Howard Beach), has been passed by the Assembly and is awaiting delivery to Gov. Andrew Cuomo.