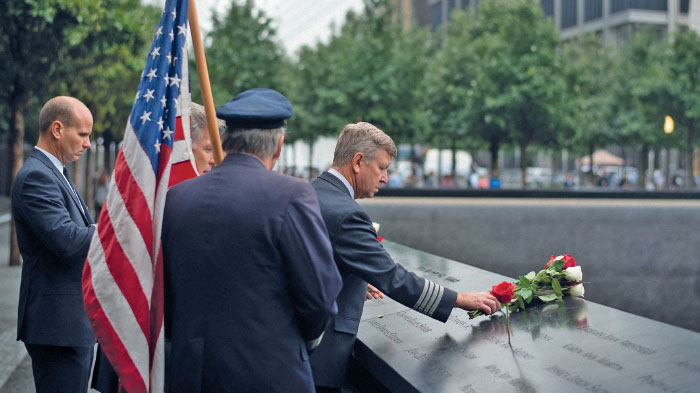 Senate Majority Leader Mitch McConnell (R-Ky.), famous for, well, not doing his job, made headlines this week for doing something he should have done a long time ago.
According to published reports, following a meeting with a group of first responders—after likely ducking these heroes for years—McConnell promised them that he would green-light a vote on a bill that would make the September 11th Victim Compensation Fund permanent.
“While I appreciate that Senator McConnell is meeting with the 9/11 responders, I hope that it will be the last time they have to come down to Washington, period. They are sick, they are dying, and they have already had to spend too much of their precious time walking the halls of Congress and fighting to convince members of Congress that making the 9/11 Victim Compensation Fund permanent is the right thing to do,” Sen. Kirsten Gillibrand said on Monday. “Enough is enough. As soon as the meeting is finished, Senator McConnell should immediately commit to putting the bill that will soon pass the House on the floor for a standalone vote. We owe this to our heroes, and we should not force them to wait one more day.”
As we have reported, the VCF is in bad shape. In the fund’s Seventh Annual Status Report and Third Annual Reassessment of Policies and Procedures, both published in February, VCF Special Master Rupa Bhattacharyya indicated that a VCF funding shortfall—due in large part to an incredible escalation in the number of claims filed in 2018 on account of a surge in the rates of serious illnesses suffered by members of the Sept. 11 community and the increasing number of deaths that can be attributed to Sept. 11 exposure—has forced her to significantly decrease future payouts. For any claim or amendment submitted on or before Feb. 1, 2019, the payout will be reduced by 50 percent. For any claim or amendment submitted on or after Feb. 2, 2019, the payout will be reduced by 70 percent.
“The stark reality of the data leaves me no choice,” Bhattacharyya has said.
We all know it should not have come to this. We all know that it didn’t have to.
Perhaps comedian and staunch 9/11 first responder advocate Jon Stewart put it best earlier this month in his impassioned, emotional nine-minute testimony to members of Congress, imploring them to act on the fund immediately.
“As I sit here today, I can’t help but think what an incredible metaphor this room is for the entire process that getting health care benefits for 9/11 first responders has come to. Behind me, a filled room of 9/11 first responders and in front of me, a nearly empty Congress,” Stewart said. “Sick and dying, they brought themselves down here to speak to no one. Shameful. It’s an embarrassment to the country and it’s a stain on this institution. And you should be ashamed of yourselves for those that aren’t here. But you won’t be because accountability doesn’t appear to be something that occurs in this chamber.
“Why this bill isn’t unanimous consent and a standalone issue is beyond my comprehension, and I’ve yet to hear a reasonable explanation for why it’ll get stuck in some transportation bill or some appropriations bill and get sent over to the Senate, where a certain someone from the Senate will use it as a political football to get themselves maybe another new import tax on petroleum, because that’s what happened to us in 2015,” Stewart continued, his voice cracking with frustration and grief. “And we won’t allow it to happen again. Thank God for people like John Feals, thank God for people like Ray Pfeifer, thank God for all these people who will not let it happen. They responded in five seconds. They did their jobs with courage, grace, tenacity, humility. Eighteen years later, do yours.”